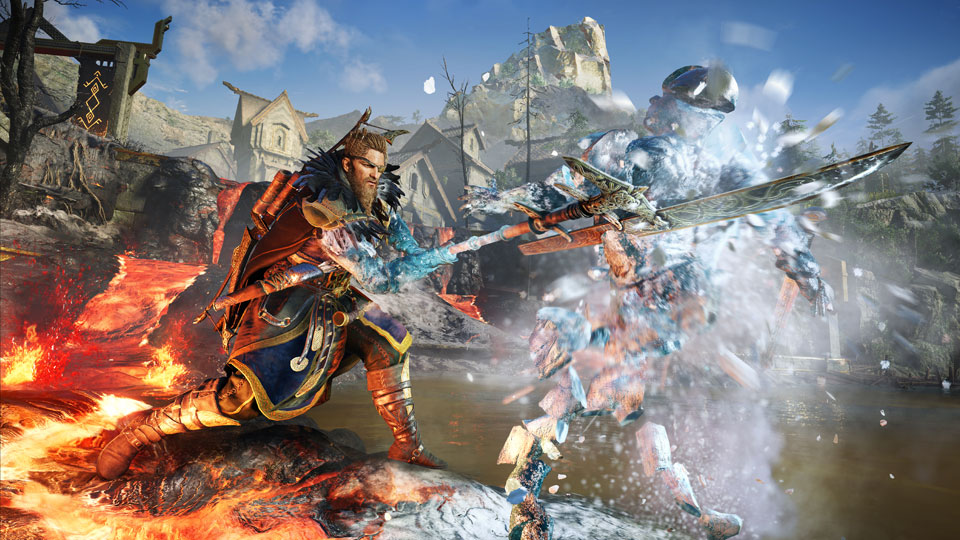 Assassin’s Creed
Valhalla
has taken Eivor, its unstoppable Viking raider, all over ninth-century Norway,
England, Ireland, and Francia – and it’s about to add two more destinations to
that list. On March 10, 2022, Eivor will embark on a new adventure as Odin in
Dawn of Ragnarök, a major expansion that drops the All-Father into the dwarven
realm of Svartalfheim. And starting tomorrow, a free update will enable Eivor to
travel to the Isle of Skye, where they’ll meet a familiar face from Assassin’s
Creed’s (very) distant past: Kassandra, hero of Assassin’s Creed Odyssey.
(Warning: Spoilers for Assassin’s Creed Odyssey follow.)

A Crossover Centuries in the Making

Kassandra’s appearance is part of a crossover that actually spans both games.
Assassin’s Creed Odyssey players will get a new free story, “Those Who Are
Treasured,” in which Kassandra or Alexios – having found the
immortality-granting Staff of Hermes Trismegistus at the end of the game’s story
– travel to the island of Korfu as they wrestle with the question of what to do
with their newfound longevity. In Assassin’s Creed Valhalla, “A Fated Encounter”
will bring Eivor to the Isle of Skye in Scotland, where they’ll cross blades
with Kassandra.

“The first question we wanted to answer was about Kassandra’s immortality,” says
Clémence Nogrix, associate creative director at Ubisoft Quebec, the studio that
led development of both crossover stories. “Then, we can allow ourselves to ask
what happens when two Assassin’s Creed protagonists [from past games] meet… and
not when one is dead or an illusion. This time around, we could ask ourselves
what would happen between these two characters, Kassandra and Eivor, who have
very similar, very distinct personalities, but are also very witty and have
their own personal egos.” 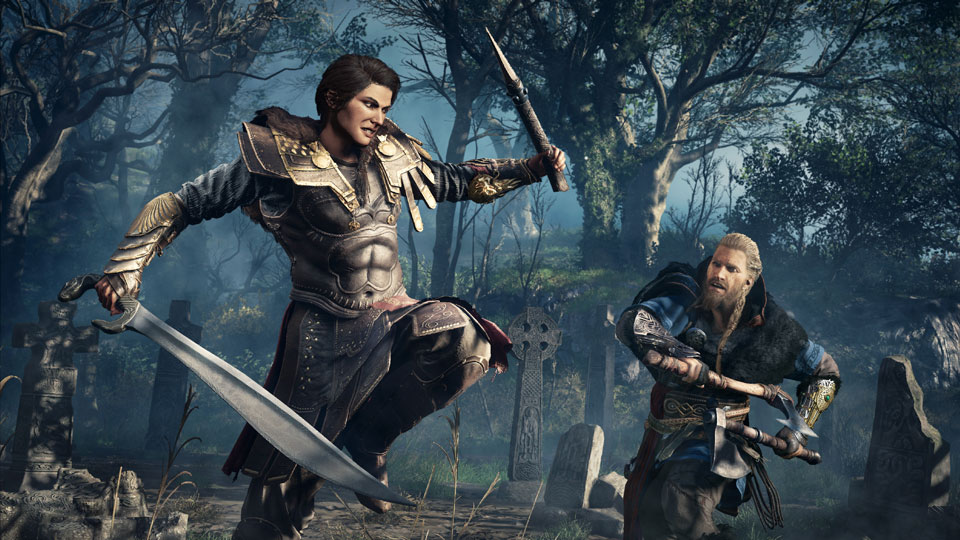 “Those Who Are Treasured” can be played after finishing Chapter 1 of Assassin’s
Creed Odyssey and reaching Megaris, although it’s recommended that players
finish the main game’s three story arcs – Family, Cult of Kosmos, and Mythology
– for spoiler reasons. This story sees Kassandra finding a new purpose in life:
hunting down First Civilization artifacts. “A Fated Encounter” will open up
after Assassin’s Creed Valhalla players complete the quest “A Wise Friend,” in
which Eivor helps Valka establish herself in Ravensthorpe.

“There’s more to the encounter between Kassandra and Eivor, and I hope that
players will be able to see that, even throughout the years, Kassandra is still
Kassandra,” says Nogrix. “Even if she, over 1,300 years, could have seen the
rise and fall of the Roman Empire, traveled the world, and seen a zillion
things, she’s pretty much herself, still.”

If you haven’t yet played Assassin’s Creed Odyssey, you can play for free from
December 16-19 on PS4, Xbox One, Stadia, and PC (via the Ubisoft Store and
Steam) as part of Ubisoft’s 35th Anniversary celebrations. And if you want to
keep your odyssey going (and keep your progression) after the free period is
over, you can purchase it for up to 75% off until January 6, 2022.

A Massive Adventure Through Norse Mythology

Launching on March 10, 2022, Dawn of Ragnarök will be the biggest expansion to
hit the Assassin’s Creed franchise yet. Promising more content than some full
games in the series, the expansion will be set entirely within Norse mythology.

Developed by Ubisoft Sofia (the studio behind Assassin’s Creed Rogue and
Assassin’s Creed Origins – The Curse of the Pharaohs), Dawn of Ragnarök focuses
entirely on Odin (aka Havi), and is set after the events of the Asgard and
Jotunheim arcs found in the main campaign. This new adventure puts the one-eyed
god on a journey to save their son, Baldr, held captive by the fire giant Surtr
in the dwarven realm of Svartalfheim – a mythical new world about one-third the
size of England. Under occupation from the fiery realm of Muspelheim (as well as
icy Jotunheim), Svartalfheim has become a hostile, lava-filled landscape
patrolled by flame-wielding enemies, some of whom can do things like revive
their fallen comrades. To survive, Odin will need to find hidden Shelters across
the world, and seek help from the dwarves who’ve taken refuge in them. 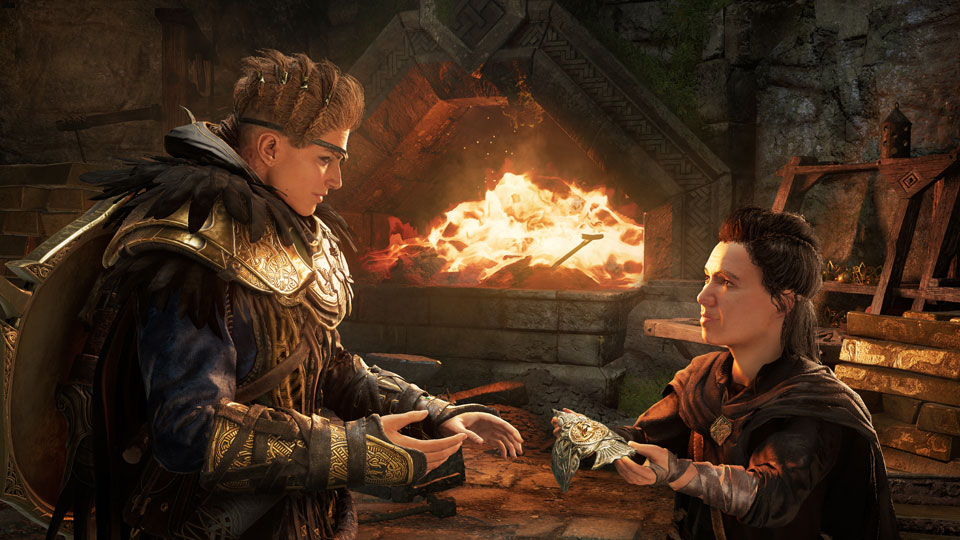 “Baldr, the armies of Muspelheim, and the world of the dwarves, Svartalfheim,
are deeply incorporated into the saga of Ragnarök,” says Mikhail Lozanov,
creative director at Ubisoft Sofia. “Svartalfheim is where all the famous
magical weapons and artifacts have come from, and this beautiful and surreal
world is torn by war. Most of the dwarves have been imprisoned and forced to
search for ancient artifacts, or to craft weapons for the upcoming war against
the gods. Players must be very careful when they traverse the open world,
because since the occupation began, no place is safe, even for a god.”

Central to Odin’s adventure is an artifact called the Hugr-Rip, which enables
Odin to draw new powers from defeated enemies. These enable Odin to do things
like take on the guise of a fiery Muspel and walk stealthily among them (while
also becoming immune to fire and magma), or turn into a raven to quickly cover
long distances. Players will also be able to imbue their weapons with freezing
effects, raise defeated enemies to fight for them, and more – but only two Hugr
powers can be held at a time, pushing players to pick ones that best fit their
situation or character build. These powers also need Hugr life essence to power
them, which can be drawn from defeated enemies, giant flowers called Hugr
Blooms, or by sacrificing some of Odin’s health at special shrines.

Not all the new challenges in Svartalfheim come from the Muspels and Jotnar;
players can also visit a battle arena run by a Valkyrie, and take on combat
trials with optional, difficulty-boosting boasts that will make victory more
rewarding. 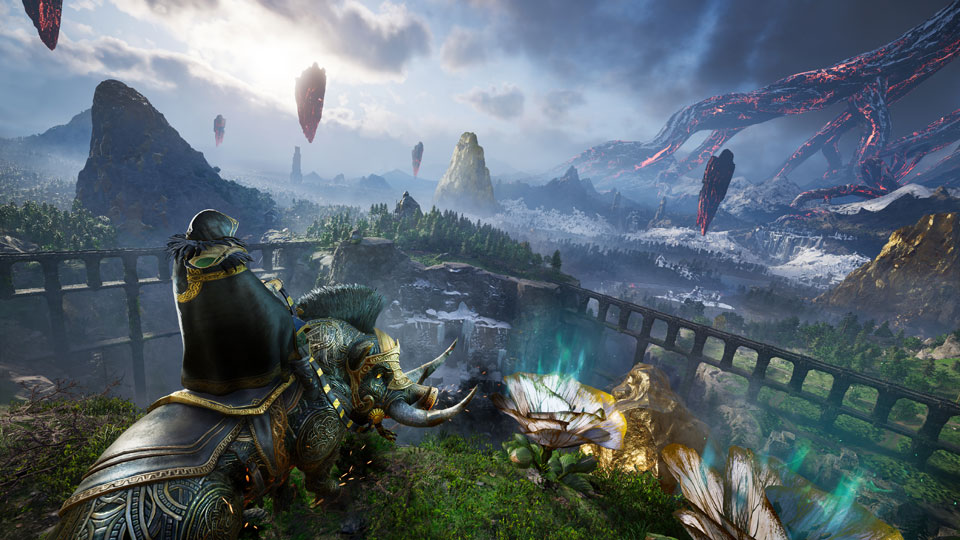 “One of the key elements of the vision of Dawn of Ragnarök is to make players
engage with the world and its inhabitants; to encourage players to observe and
explore the world, and to experiment with the challenges we offer them” says
Lozanov. “The powers that Odin can acquire from defeated enemies will allow
players to traverse the vast world and create opportunities that were not
possible before. For example, players who love stealth gameplay will be able to
remain concealed and use this to their advantage. The powers are designed
towards almost every kind of gameplay style that our players love.”