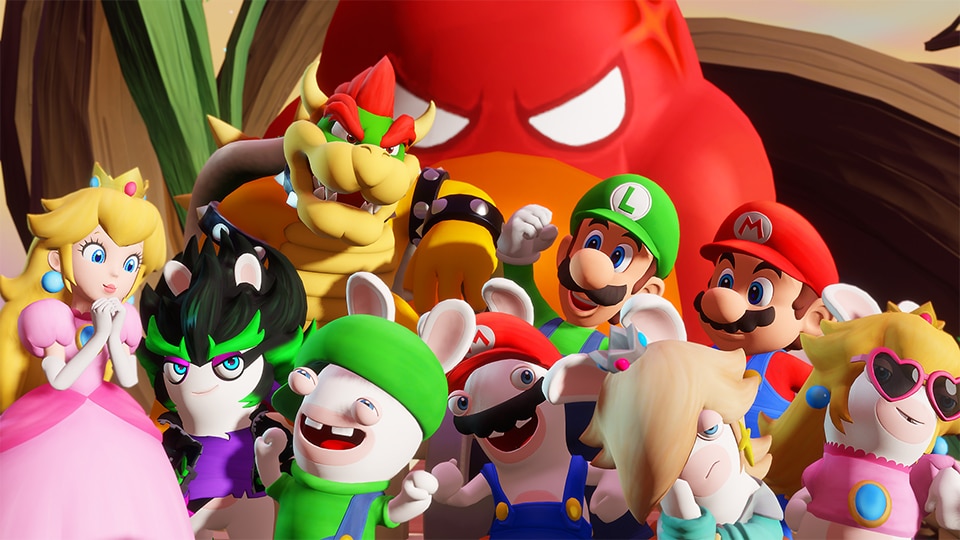 Mario + Rabbids Sparks of Hope is coming to Nintendo Switch on October 20, and features the Rabbids in a way you've never seen - or heard - them before. There's a mysterious new Rabbid hero named Edge, and the Rabbids talk now! During a studio tour of Ubisoft Milan, the development team discussed how they wanted to evolve the Rabbids as a brand and as characters with Sparks of Hope. They expanded the Rabbids' range of emotions, gave them more personality, and changed the way they speak.

In their quest to reinvent the Rabbids, the team set out to make something different. "We wanted to create a Rabbid that is unique, that is not a reference to a Nintendo character or hero," says Lead Producer Xavier Manzanares. The result was an original character named Edge. 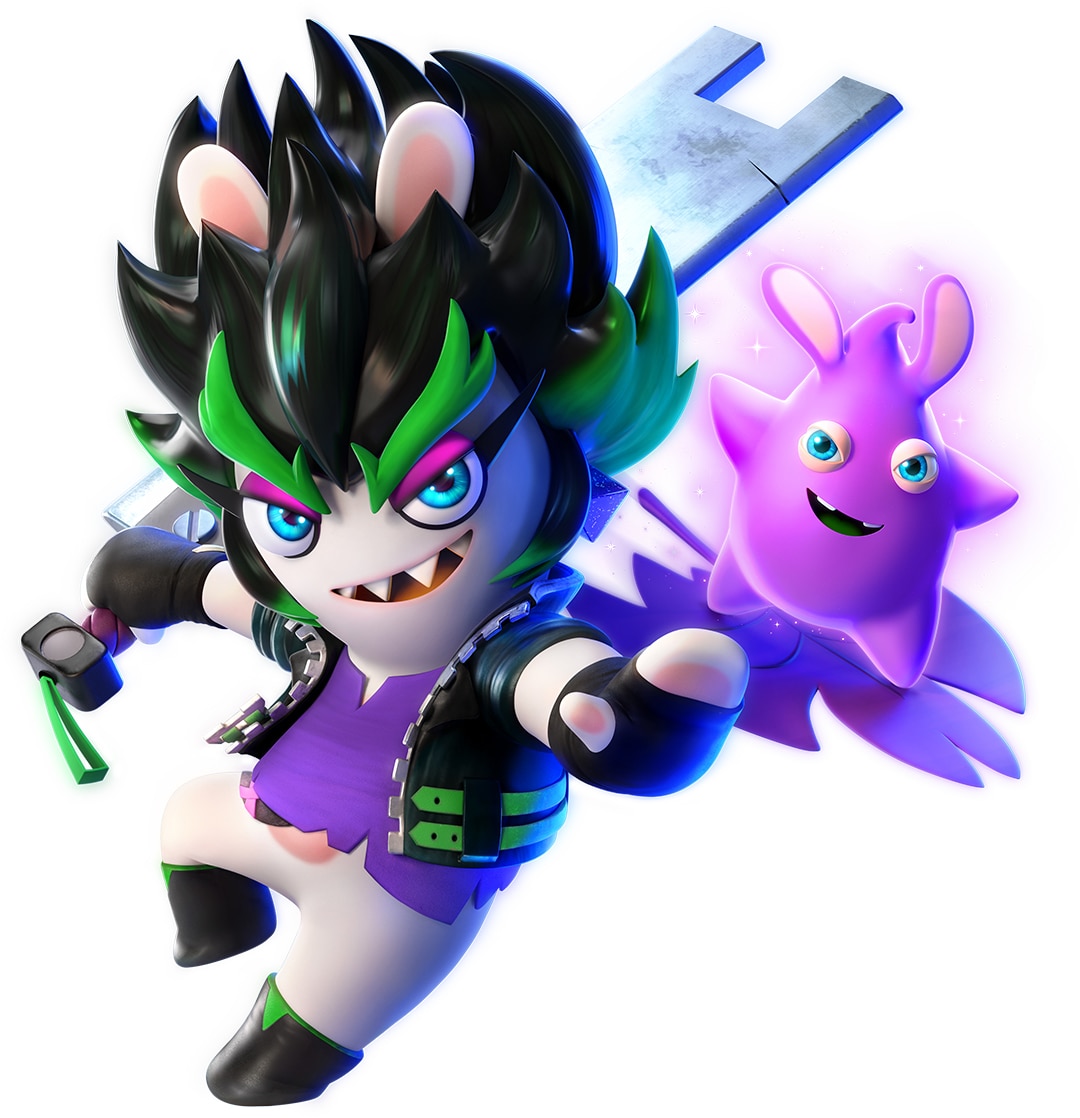 "Usually, people think of Rabbids as funny and goofy, so Edge is something more unexpected," says Animation Director Marco Renso. Edge breaks the Rabbids mold with her mysterious and heroic personality, tough attitude, and her appearance - her legs, eyebrows, and eyelashes are different than those of other Rabbids. Plus, she brings a new archetype to the team of Heroes, fighting with a giant sword.

When creating Edge, the team drew from references to older RPGs and pop-culture heroes. "I often say that she is the female version of Clint Eastwood," says Creative Director Davide Soliani. "She does not speak much, and she has two expressions, with and without her sword." To capture Edge's distinct personality, the animation team built a completely new rigging system. Edge (as well as the rest of the Rabbids) has more than 2,000 controls in order to animate more subtle expressions. This new system allows Edge and other characters in the game to convey more emotions, a necessary addition for Sparks of Hope's deeper story.

In addition to making the Rabbids more emotive, another step in their evolution was changing the way they speak. "When it was all about party games, it was more about the Rabbids as a group, and they had a group voice that was linked to the gameplay - very crazy and humorous," says Manzanares. "But as soon as we started to work on an adventure game like Kingdom Battle, and now Sparks of Hope, you realize how it's important to have Rabbids with personalities." 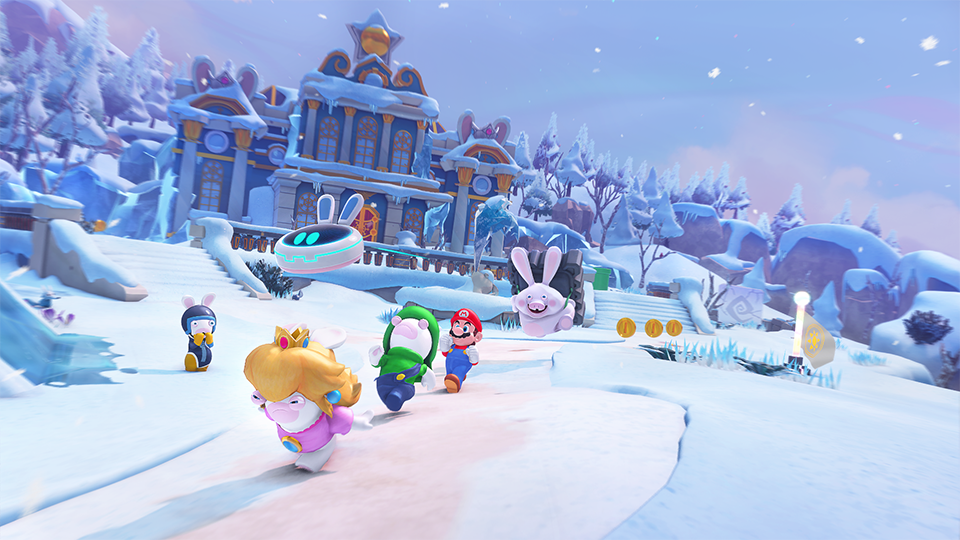 Audio Director Romain Brillaud explains that the Rabbids now speak a hybrid language that combines their signature gibberish language with full sentences. "They're changing, and their language needed to expand as well in order to inject new feelings from them, and this is something that eventually became too hard without wording," Brillaud says. "The whole idea was to expand their range of emotions."

In Kingdom Battle, the Rabbids were somewhat toned down, and more subtle in their humor and the way they talked. For Sparks of Hope, the team decided to experiment with giving the Rabbids lines of dialogue. "We said, let's go all in. Let's have dedicated actors for the Rabbids' voices, and each of them should have this personality that is very strong," says Manzanares. "Rabbid Mario is not Mario as a Rabbid. It really is a new character, a new hero."

"Making them speak was, for us, a way to speak directly to the player," adds Soliani. "The message is way more direct if the characters are speaking."

Get to know the new and improved Rabbids in Mario + Rabbids Sparks of Hope, coming to Nintendo Switch on October 20. Pre-order is available now at the Ubisoft Store. In the meantime, read more about how the new game shakes up its formula and redefines tactical RPGs.