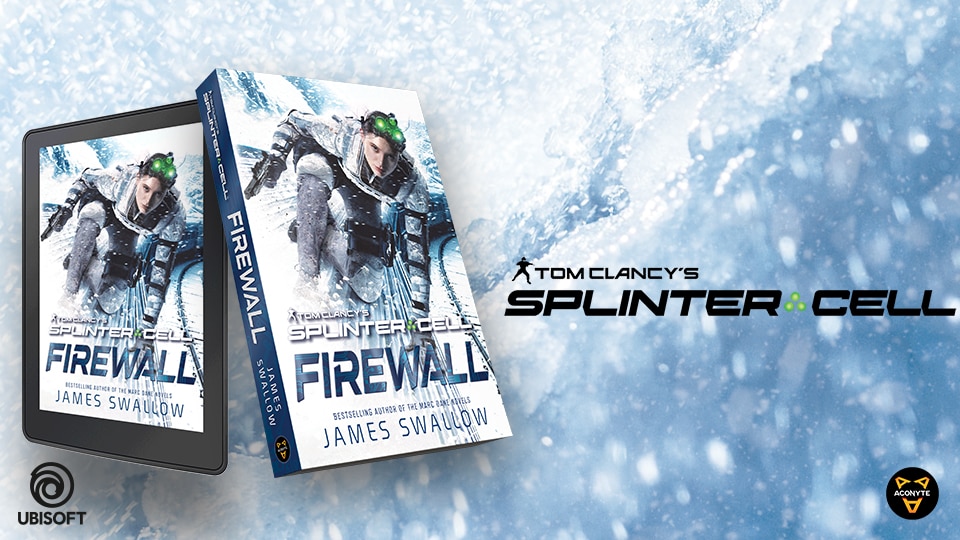 Following the announcement of the Splinter Cell
remake
by Ubisoft
Toronto,
the cover of the first Splinter Cell
novel
developed with publishing partner Aconyte has been revealed. “Firewall: A Tom
Clancy’s Splinter Cell Novel” was written by British novelist James Swallow, a
longtime fan of the franchise who has also worked as a writer on The Division 2
and Ghost Recon Wildlands. James is a New York Times, Sunday Times, and Amazon
#1 best-selling writer, known for his Marc Dane series of action thrillers.
“Firewall” will be launched in the USA on March 15 and in the UK on June 9.
More European-localized versions will follow in 2022, including versions for
France, Germany, Italy, and Russia.

“Firewall” stars Sam’s daughter, Sarah Fisher, who is just as driven and dedicated as her old man. To celebrate the launch of this new novel, we asked Swallow and Editor, Gwendolyn Nix a few questions regarding the novel and his relationship to the Clancy franchises.

Where is this novel located within the Splinter Cell franchise timeline?

James Swallow: “Firewall” takes place in 2015, which is two years after the
events depicted in Splinter Cell: Blacklist, where Sam Fisher and Fourth Echelon
fought the terrorist group called The Engineers; and four years prior to
Operation Watchman in Bolivia, as seen in Ghost Recon Wildlands, where Sam joins
the Ghosts for a top-secret covert mission.

Why did you decide to explore the relationship between Sarah and Sam? What’s
so special about them?

JS: From the very first concept I had for “Firewall,” Sarah Fisher was
always going to be an integral character in the story, because she’s such an
important part of Sam Fisher’s life – she’s the one true thing in his otherwise
dark and deceptive world. But as much as Sam has tried to keep her out of the
shadows, events have always conspired against them in previous Splinter Cell
stories. As well as building an action-packed techno-thriller narrative in the
tradition of Tom Clancy’s fiction, I wanted to make sure this novel had a strong
human element as well. That part of the story is about how Sam handles the idea
of Sarah being put in harm’s way, and how Sarah deals with being in the shadow
of her secret-agent father.

I really like the relationship between the Fishers, and it was cool to be able
to build on what had come before. Originally, Sarah was written in a civilian,
supporting position, but as I developed the plotline with Ubisoft’s story team,
they wanted to put her in a more proactive, forceful role and actually bring her
into her dad’s clandestine world as an agent-in-waiting. I immediately saw great
dramatic potential in that! Sam’s not happy about Sarah following in his
footsteps and getting into danger, while she has her own baggage to deal with –
in previous stories, she’s been kidnapped, had her death faked – so it was
interesting to explore their relationship in this new dynamic. I get to go
deeper into Sam’s backstory and persona, and give Sarah more agency at the same
time.

Gwendolyn Nix: As Sarah steps into her father’s footsteps as a freshly
recruited member of Fourth Echelon, it marks a distinct change and development
with her relationship with Sam. Suddenly, Sam must contend with his daughter
willingly stepping into danger and juggling his image of her as a child with her
lethal agent training that mirrors his own. This brings a new, fun dynamic to
the series. In a way, Sam mentors new agents and realizing his past has so
influenced his only child has him wondering about his choices, and if she should
be following them. Sarah, on the other hand, wants to impress her father and
prove on her own terms that she’s ready. Brought up with Sam’s strong morals,
she clashes with what the job expects of her. This gives us, creatively, an
exciting and explosive relationship to work with, and a lot of Splinter Cell
lore to explore and introduce to new readers, as well as to entice fans of the
franchise. One minute, Sam and Sarah might be arguing and at each other’s
throats, but they are of one mind when it’s time to get the mission done.

Where did you draw inspiration for this Gordian Sword plot? What iconic
Splinter Cell features will we find in this novel?

JS: We live in a wired world right now, where so much of our lives are
online, and so much that matters operates exclusively in the digital realm – so
I wanted to create a peril with Gordian Sword that is powerful enough to disrupt
all of it. It’s a classic Splinter Cell threat, an information-warfare terror
weapon that can bring down cities, governments, or entire nations. I took my
inspiration from real-world cyberattacks (like Stuxnet, NotPetya, Titan Rain,
and others) and dialed up the lethality.

In terms of Splinter Cell elements in “Firewall,” there are plenty! Longtime
fans of the franchise will recognize not just Sam’s iconic tri-goggles, the
Paladin, or mark-and-execute moments, but also weapons, spy gear, and more,
which I had a lot of fun working into the narrative. You’ll also see some
familiar faces from the series – Anna Grímsdóttir returns, of course, and one of
my all-time favorite Splinter Cell supporting characters, Andriy Kobin, also
makes an appearance.

GN: Not only does James expertly weave Splinter Cell lore into the heart of
the novel, he also makes numerous nods to other Tom Clancy properties that a
canny reader will delight in discovering. All the while, this story provides a
wonderful entry for new readers interested in the Splinter Cell universe and
wondering where to start. And that bit with Andriy Kobin? You’ll absolutely
love, I guarantee.

Your track record is quite diverse, from sci-fi to fantasy and, of course,
thrillers. What attracted you to Splinter Cell?

JS: I’m a big fan of the game series, having played pretty much all the
iterations of Splinter Cell since the original, read all the books and comics,
and bought plenty of merch! I have to say Sam Fisher is one of my all-time
favorite videogame protagonists. And as a thriller reader from way back, I came
up reading the novels of Tom Clancy, and those have been a big influence on me
as an author.

So when I heard that my colleagues at Aconyte Books were partnering with
Ubisoft, the first thing I did was reach out to them and say “I want to write a
Splinter Cell novel for you.” I can honestly say, this is one of those items
ticked off my bucket list of “Writing Jobs I’d Love to Do.” I had a blast
writing “Firewall.”

GN: James’ passion for Splinter Cell and his immense knowledge of the games
– and contribution to the Tom Clancy world in general – made him the perfect fit
for this novel. We couldn’t have asked for better. His experience in the fantasy
and sci-fi realms, alongside his heart-stopping Marc Dane thrillers, means he’s
well-rounded and able to come up with something unique and entirely fitting for
this genre and universe.

For more information about all things Splinter Cell, be sure to check back in
to news.ubisoft.com.