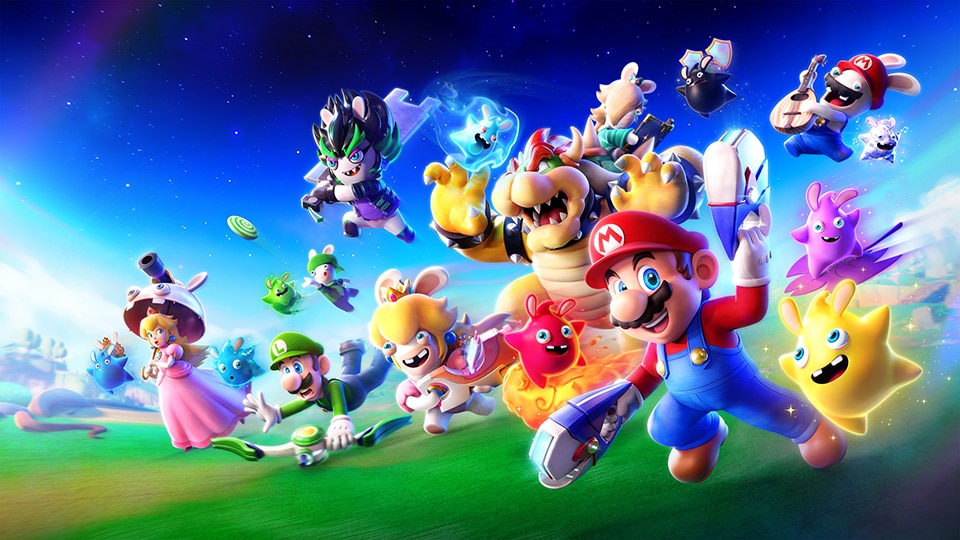 Mario + Rabbids Sparks of Hope is available now, exclusively on Nintendo Switch. Dive into a brand-new cosmic adventure with Mario, Luigi, Rabbid Peach, and their friends as they embark on a journey to defeat Cursa, a mysterious and malevolent entity determined to consume all the energy in the universe. Our Heroes will team up with new allies, including Rabbid Rosalina, a brand-new Rabbid hero named Edge, and their long-time enemy, Bowser. Together, they must traverse the galaxy to save the Sparks – creatures formed by the fusion of Lumas and Rabbids that possess special powers – who are being hunted by Cursa’s minions.

Sparks of Hope's single-player adventure combines turn-based tactics with real-time action. Heroes can move freely around the arena to dash through enemies and launch off allies to reach spots outside their field of movement to get the most out of every turn before hiding behind cover. Each Hero also has two action points that can be used to attack enemies, use an item, or activate a special ability or Spark Power. The gameplay is fully customizable, with a wealth of difficulty and accessibility options to make the game approachable for new players while offering a challenge to more experienced tactical players.

Head into battle with a team of three Heroes (from an eventual roster of nine), and upgrade and unlock their abilities through individual skill trees. You can switch up your team members any time before a battle, but once it begins, you’re locked in. Each Hero can eventually equip two Sparks to gain additional abilities, ranging from energy shields to powerful elemental attacks. Sparks can be independently leveled up and swapped between Heroes – and to recruit new ones, you’ll have to explore a variety of planets to locate and save them.

Each planet is open and freely explorable, with a unique atmosphere, setting, and characters. Each one is also filled with side quests, challenges, and secrets, which you can discover and tackle in any order. As you explore the galaxy, you can solve puzzles, engage in surprising activities, and find a variety of collectibles. You can buy Mario + Rabbids Sparks of Hope at the Ubisoft Store today in Standard or Gold Editions. The Gold Edition includes the Season Pass, with access to upcoming DLC packs with additional story content, new characters, quests, and battles. Rayman will reunite with the Rabbids and star in Sparks of Hope’s third DLC expansion.

Start your adventure in Mario + Rabbids Sparks of Hope, available now exclusively on Nintendo Switch. For more on Sparks of Hope, check out the game’s accessibility options, and read about how the developers created the new hero, Edge, and gave the Rabbids dialogue.