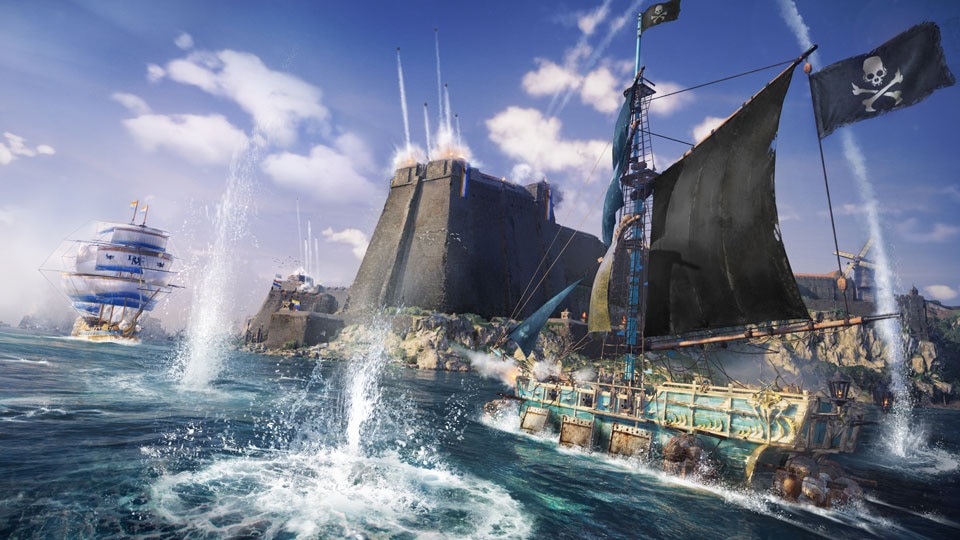 When it launches on November 8, Skull and Bones will let players explore a massive open world inspired by the Indian Ocean during the Golden Age of Piracy, where riches and notoriety are theirs for the taking. Players can make a name for themselves while battling for survival against armed pirate hunters, greedy corporations, rival factions, wild animals, deadly storms, and a cutthroat crew who won’t hesitate to mutiny if they aren’t well-fed. But some of Skull and Bones’ deadliest threats – and richest rewards – are found on land.

Skull and Bones’ Indian Ocean is dotted with coastal settlements; some, like Outposts, let players dock, do business with the locals, and maybe hunt for treasure. Larger settlements, on the other hand, are rich opportunities for plunder, although this carries significant risks: settlements are protected by powerful defensive towers, and can summon reinforcement ships to attack you while you bombard them. (Attacking will also temporarily anger the faction that owns that settlement, so you’ll have to wait until the heat dies down or pay a fixer to smooth things over if you want to do business with them again.) But the biggest risks carry the greatest rewards, and successfully plundering a port can deliver a lot of valuable goods to your cargo hold – as well as significantly boost your Infamy, which gives you access to better weapons, ships, crafting blueprints, and other resources.

Plundering settlements is something you should only attempt if you’ve already made some Infamy progress; you can’t do it with your starting Dhow vessel and a spear, for example. In fact, it’s a good idea to have unlocked a few different ships out of the 12 available at launch – and to enlist the help of other players who’ve done the same. Teaming up with others allows you to vary your approach significantly; with three players, for example, you could use a speedy navigation ship, like the Brigantine, to draw fire and outmaneuver the enemy’s cannons, while a heavier firepower ship like the Brig unloads bombards, mortars, Greek fire, and other devastating weaponry at the defenders. For good measure, a third player could bring up the rear in a cargo ship, which would make for a slower getaway, but ensure you can collect a larger share of the abundant loot (just be sure you trust them not to run away with it).

If you prefer a solo assault, you’ll need to strategize, equipping the best ship for your playstyle that can skillfully attack, withstand fire, and still have room to haul away the goods. In addition to their natural strengths and weaknesses, all of your ships can be customized with a wide selection of unlockable weapons and armor types, each of which serves different purposes and suits different playstyles. 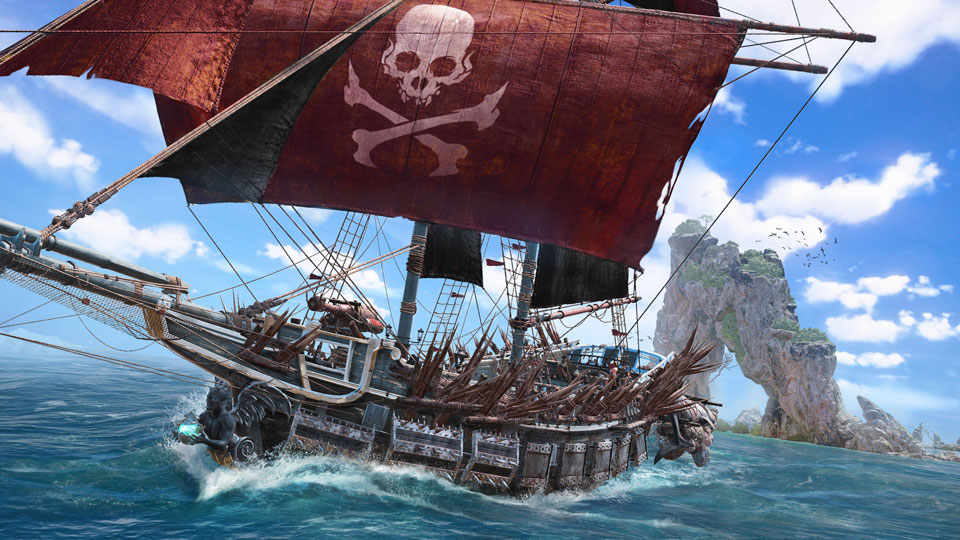 Once you have a vulnerable settlement in your sights, you’ll have the option to sail in close and start plundering it. During this maneuver, some of your crew will sneak a loot barge ashore and the battle will begin. While they’re busy, you’ll need to be ready for attacks on all sides (it’s a good idea to brace for impact as often as possible, which mitigates damage, and to keep a few repair kits on hand), while keeping up steady fire on the defenders and targeting any glowing red weak points to deal critical damage. Wrecking the defensive fortifications will reduce the amount of fire you take from the settlement, and should you manage to do enough damage to enemy ships, getting close enough to board them will yield more loot than sinking them.

So long as you stay within a small radius around the settlement, an onscreen meter will gradually fill as your crew makes progress toward multiple looting goals. If you’ve decided you’ve had enough (either in terms of loot or punishment), you can cut and run at any time – but the biggest rewards go to those who can stay until the job’s done.

Plundering these ports is just one of many paths to riches and Infamy in Skull and Bones’ Indian Ocean. The most straightforward way to build your reputation and strike it rich is to accept contracts – missions with pre-set rewards – from the inhabitants of pirate dens. Another is to use your captain’s spyglass to find rich trading vessels at sea and ransack whatever goods they’re carrying. You could also attack other players (if you’re playing on a PvP-enabled server), especially if they’ve been out plundering and are headed back to the nearest pirate den loaded with loot. Even hunting wild animals can net you Infamy, as well as meat you can use to keep your crew fed, happy, and singing sea shanties – instead of ready to mutiny and toss you overboard. 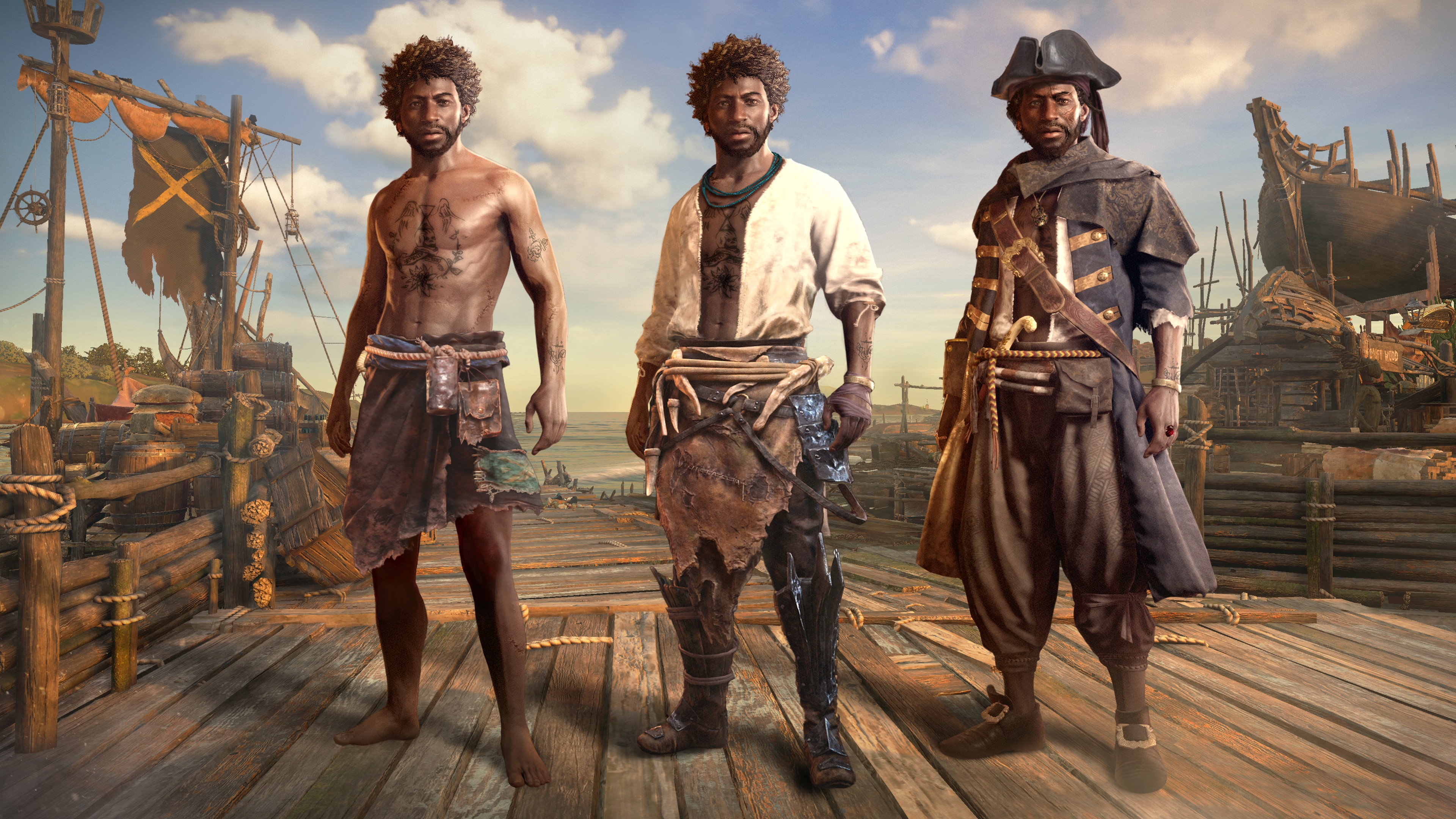 Just be aware that if you fail while attempting any of the above, you can actually lose your Infamy; the easier the task, the bigger the hit to your Infamy should you fail. As you continue to build your Infamy, you’ll not only unlock access to new tools and resources – you’ll also attract more lucrative and dangerous contracts, an essential step as you rise from outcast to pirate kingpin. (And then, of course, you’ll be able to plunder bigger and better-fortified settlements.)

You can forge your own path to Infamy when Skull and Bones launches on November 8 for Xbox Series X|S, PS5, PC via the Epic Games Store and Ubisoft Store, Stadia, and Amazon Luna. For more on the game, check out the announcement from Ubisoft Forward, and visit our dedicated Skull and Bones news hub.