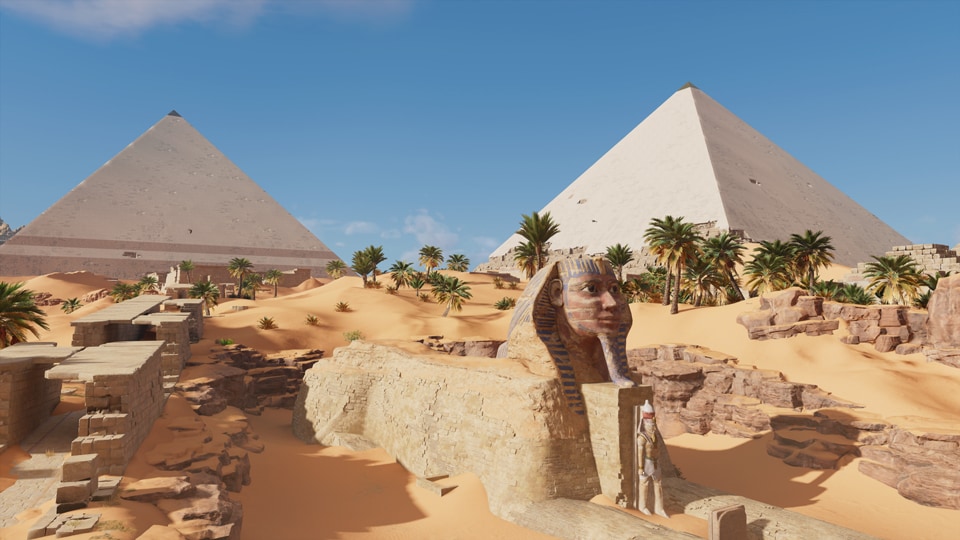 By now, you've had time to explore Discovery Tour by Assassin's Creed: Ancient Egypt and learn all sorts of fun facts about Ptolemaic Egypt – but why stop there? Throughout your guided exploration of Alexandria or the Giza plateau, you may have encountered a few obscure key terms that may not have been immediately obvious, or perhaps mean something different in the ancient world than they do today. Fear not! We're here to provide an easy reference guide for any potentially confusing terms you may have encountered during your Discovery Tour.

Acropolis – While "The Acropolis" is often used to describe a hill in Athens, the word Acropolis literally means the highest point in a city. As such, any city with a hilltop could have an acropolis. These areas typically housed temples or places of worship. "

"The Acropolis of Cyrene"

Ag****ôn – The ancient Greek term for a competition or contest. While commonly applied to athletics and horse or chariot racing, the term applies to the many forms of competition that the Greeks enjoyed including musical, theatrical, or literary competition.

Apocrypha – The original Greek origins of the word mean "hidden," but it has since been adapted in Latin to mean writing which come from an unknown origin.

Arena – The term arena actually comes from the Latin word for sand, "harenae." The word became synonymous with amphitheaters and stadiums because of the sand that would line the floor of such structures.

Asp – A type of venomous snake found in the Nile region. Its venom was often used for executions. It is believed that Cleopatra used an asp to commit suicide after the death of Mark Antony.

Astrolabes – An antique instrument used to make astronomical measurements that could aid in mapping and navigation. It relied on the ability to identify stars or planets relative to the local time to calculate latitude.

"An astrolabe from the Library of Alexandria"

Buttress – As buildings grow taller, they not only exert forces downwards toward the earth, but laterally as well. Buttresses are specific structural elements used to compensate for the horizontal forces of a building and keep the walls from pushing outwards.

Cenotaph – A monument in a tomb for someone who is buried elsewhere. A cenotaph has all the makings of a tomb, minus the actual body.

Corbelled Arch – Unlike a true arch, where each stone is placed in a radial position along the curve of the arch and relies on the compression from the stones around it to stay in place, a corbelled arch is made up of stones that are laid horizontally and stacked on top of one another, so that the opening they make resembles a stepped pyramid.

*"A corbelled arch from inside the Great Pyramid of Khufu" *

Cornice – An ornamental molding around a building or temple at the roofline.

Doric colonnade – Doric is one of the three classical orders of Greek architecture, classified by wider columns with no bases, simplified column tops or "capitals," and a horizontal mural called a "frieze" consisting of alternating three-bar symbols called "triglyphs" and figural depictions called "metopes." A Doric colonnade is a row of Doric-style columns that line a pathway or encircle a temple. The other two orders, Ionic and Corinthian, featured more slender columns and more ornate decorations.

Dromedary – A type of one-humped camel, also known as an Arabian camel.

Edifice – A particularly large or imposing building or monument.

Flotilla – A fleet of ships or boats.

Gymnasium – Like the gyms of today, ancient gymnasiums were the place to go to train and work out, but they were also much more. Intellectual discussion and socializing was just as much a part of the daily goings-on in a gymnasium as getting a pump. You'd be as likely to hear a philosophical discussion raging as you would to see athletes training.

Heliopolitan – Anything relating to the ancient city of Heliopolis, a Greek name meaning "Sun City."

Hellenized – You may have thought to yourself, "If this game is in Egypt, why are there so many Greek-looking buildings and cities?" The important thing to understand is that by the first century BCE, the Mediterranean was a culturally diverse region in which Greeks, Romans, Persians, and Egyptians all influenced each other. The ancient Greeks did not refer to themselves as Greek. They identified themselves by the polis, or city, that they came from, like Sparta or Athens. The word they used to describe the land which they came from was Hellas. So, anything described as Hellenized or Hellenistic has been influenced by ancient Greek culture and style.

In situ – A Latin phrase that translates to "on site." "In situ" means the building, artifact, or monument has not been moved from its original location.

Neoplatonism – A modern term for a strand of philosophy that originated from Plato, and was perpetuated by Plotinus in the third century CE. The spiritual philosophy is centered on the idea of "the One," as the origin of all reality.

Pagan –Following the rise and proliferation of monotheistic Christianity and the belief in only one god, religions and cults who practiced polytheism by worshipping multiple gods were deemed "pagan." When it was first introduced in the fourth century it was meant as a pejorative to signify that Polytheistic faiths were inferior to Monotheistic ones. Many pagan temples have only remained intact due to the fact that they were converted into churches after the spread of Christianity.

Photogrammetry – Often used in the recreation and modeling of ancient sites, photogrammetry is the use of photography in surveying and mapping to measure distances or proportions. The technique has even been utilized to create more realistic game worlds in other Ubisoft titles like Far Cry 5.

Portcullis – A gate that could slide up and down on vertical grooves.

Portico – Much like a porch, a portico is an open-air space covered by a roof and supported by columns. The term is often used to describe the front entry to temples.

"A portico around the periphery of the Serapeion of Alexandria"

Reliefs – A type of sculpture carved into a wall or solid plane. While they are by definition attached to a backing, and therefore not freestanding sculptures, a relief's level of depth can vary, making the sculptures look as if they've been lifted out of the background surface. To make relief sculptures more legible, they were often painted to provide greater contrast to the figurative depictions.

"Relief sculpture from the Temple of Ptah at Memphis"

Sacrum Pharia – A religious festival devoted to the divinity protecting the island of Pharos and the Lighthouse of Alexandria. The festival took place in Alexandria and featured performances and competitions from dancers, athletes, musicians, and orators as well as ritual sacrifices and libations.

Satrapy – A satrapy is a province or region which is governed by a locally appointed leader known as a satrap. The word actually comes from the Persian Achaemenid Empire, but was brought to the Mediterranean by Alexander the Great, who, ironically, made a name for himself by conquering the Achaemenid Empire in the hopes of pushing them out of Asia Minor.

Stadium – It may sound like a modern-day sports arena, but the word originates from an ancient Greek measure of length that's approximately 180 meters. The stad race was essentially the ancient version of the 200-meter dash, and as athletics became more popular across the Mediterranean, structures dedicated to sports were constructed, and eventually adopted the name of the unit of measurement that dictated the size of the structure.

Stela – Often placed on important or noteworthy locations, a stela is a vertical stone slab that typically depicts some sort of inscription or dedicatory image. Not quite the size or stature of an obelisk, stelae were much more common, and appear in various cultures all over the world.

"A stela from within the Great Pyramid"

Theater/Amphitheater – Used for similar functions, there is one key difference between theaters and amphitheaters. Theaters are semi-circular structures, while amphitheaters are fully circular or elliptical. The prefix amphi- means "both" or "around," so an amphitheater is most easily defined as two theaters facing each other, making an enclosed space.

"The Cyrene theater was extended and turned into an asymmetrical amphitheater"

Uraeus – A representation of a standing Egyptian cobra, used frequently as a symbol of royalty and divinity in the middle of Egyptian headdresses.

Urban Plan vs. Organic Growth – There are two types of cities: those that are planned out from the beginning, like Alexandria, and those that arise naturally over the course of hundreds of years, like Memphis. Usually, the key to identifying the difference lies in whether or not a city has a gridded plan. If the streets and buildings are all arranged in straight lines and right angles, it's likely a planned city.

Vivisection – The practice of performing operations on live subjects for the sole purpose of experimentation or scientific discovery.