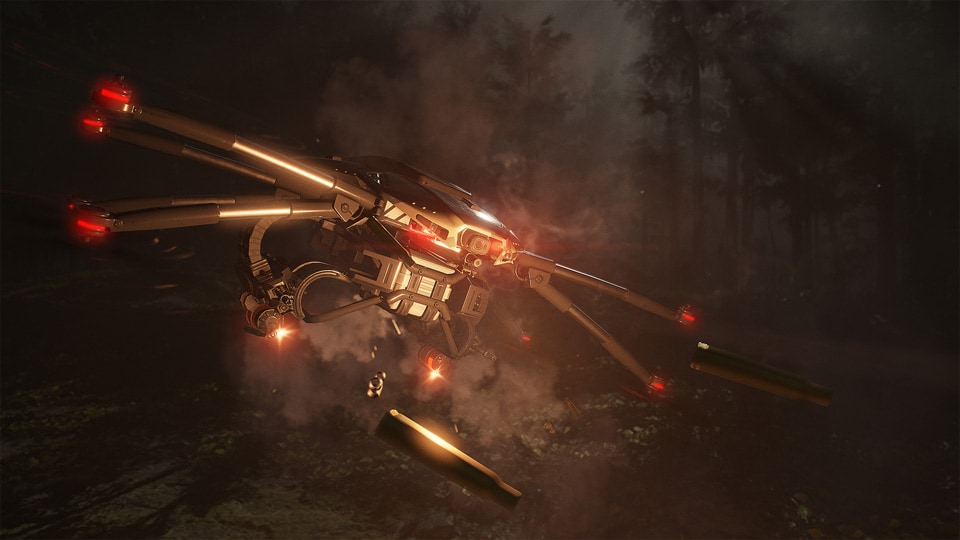 Ghost Recon Breakpoint – Why Drones are the Perfect Enemy

Ghost Recon Breakpoint is filled with dangerous enemies, and the deadliest are what the Wolves, the rogue spec-ops unit that now controls the Auroa archipelago, used to seize power: an army of highly versatile, heavily armed military drones that, until recently, were Auroa's main export. Tougher, faster, and more doggedly persistent than any soldier, Breakpoint's drones present a new kind of challenge unlike any the Ghosts have faced. And with their animalistic sounds and extreme maneuverability, they're engineered to be terrifying.

"In Ghost Recon Breakpoint, we're summoning the devil," says Associate Producer Lucas Gissinger, Jr. "We really want players to have that feeling whenever they see a militarized drone. We worked hard to create this animalistic feeling. So when you encounter a drone, you feel that you're no longer the hunter. You're the hunted."

There are more than 20 different drone types in Ghost Recon Breakpoint. All of them have different functions, ranging from benign water-carriers to heavily armored weapons platforms, and many take their names from demons. Stolas quad-rotor drones autonomously patrol wilderness areas, for example, and when they're on the hunt, their abrupt, unpredictable movements and ability to zip around obstacles make them more formidable than they look. Rolling Aym drones accompany the Wolves, and can unleash lethal gunfire and rockets should you catch their attention. The plane-like Azraël watches from the skies, forcing you to go prone and camouflage yourself or risk triggering an alarm when it's near. And the tank-like Behemoths, with their extremely heavy armor and ability to target and attack multiple players at once, present an ideal co-op challenge for any Ghosts brave enough to hunt them down.

Ghost Recon Breakpoint's drones evolved out of a push to bring new enemy archetypes to the series, especially ones that could create challenges for co-op players, says Gissinger. The developers also wanted something that would encourage what Gissinger describes as Ghost Recon's key gameplay aspects: coordination, cooperation, recon, stealth, and the use of tools other than firearms. At the same time, the game still had to be rooted in modern-day reality – and drones, Gissinger says, are very much a part of the defense industry's reality, something the developers learned by consulting with military contractors and attending drone exhibitions.

"They are the perfect soldier," says Gissinger. "They can take more bullets than any other NPC, and last longer on the battlefield. They offer gameplay opportunities to match all the things we want to do with this game. They are grounded in reality, but they are also high-tech enemies that perfectly fit the setting and the lore of Ghost Recon Breakpoint."

Once it was decided that drones fit the game's creative vision, the developers began designing their own, guided by five principles that would allow for varied gameplay:

All of these add up to a menagerie of robotic beasts that are more versatile and capable than any of their human handlers – to the point that, if a drone is equipped with more than one weapon, it can use each one on a different player simultaneously, Gissinger says. They're not invincible, however; do enough damage to a heavier drone's armor, for example, and it'll fall away, revealing the glowing, vulnerable machinery beneath. Players who want to test their precision can also target one of the drone's "eyes;" a successful hit will temporarily stun it. (So can an EMP grenade, if you've got one and want to be less precise).