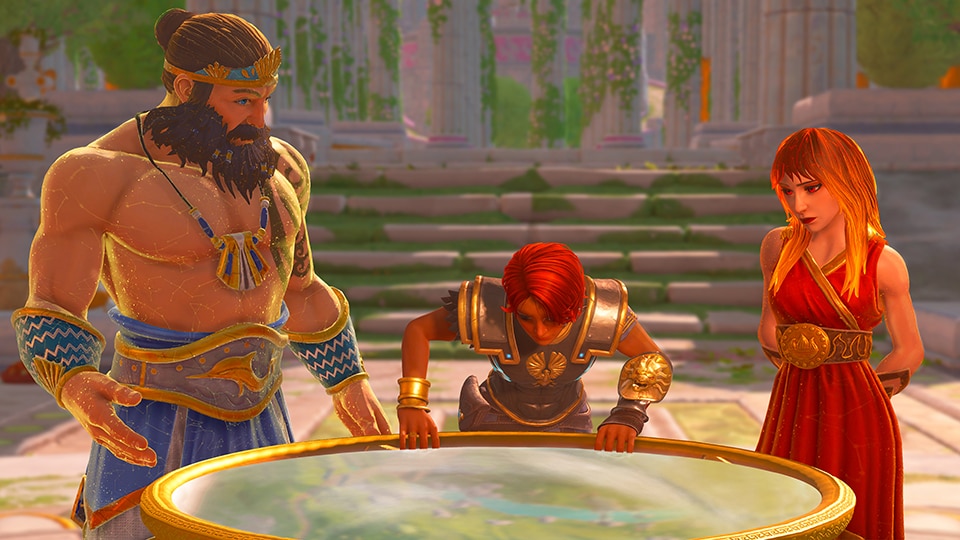 Immortals Fenyx Rising - The Lost Gods, the third narrative DLC for Immortals Fenyx Rising, launches tomorrow, April 22 – and it introduces some fundamental changes that make it unlike anything else the game has given us thus far. From its top-down perspective and brawler-inspired battles to its basic rhythms of survival and saving, the DLC feels like a fresh, distinct take on Immortals Fenyx Rising’s open-world exploration and fighting – and that starts with its new hero, Ash.

Ash is Fenyx’s champion, sent to track down the “lost gods” – including Hades, Poseidon, Demeter, Boreas, and Hestia, all of whom left Olympos after a falling-out with Zeus – and convince them to come home and help fix the disaster-stricken mortal world. Unlike Fenyx, who’s become the god of unity at this point in the story, Ash is 100% mortal, and operates by a different set of rules. While she’s a pretty good jumper who demonstrates innate sword and axe skills, all of her other abilities – including not just godly powers but climbing, swimming, and sprinting – are unlocked by doing favors for the gods and nymphs who’ve taken up residence on the Pyrite Island.

Ash does have a few new skills, however. For starters, she can eventually unlock two new powers: Catastrophe Quake, which deals damage to all nearby enemies while also surfacing and stunning any underground ones; and Nature’s Fury, a continuous beam of energy that inflicts more damage over time, and lasts as long as your stamina gauge can support it. 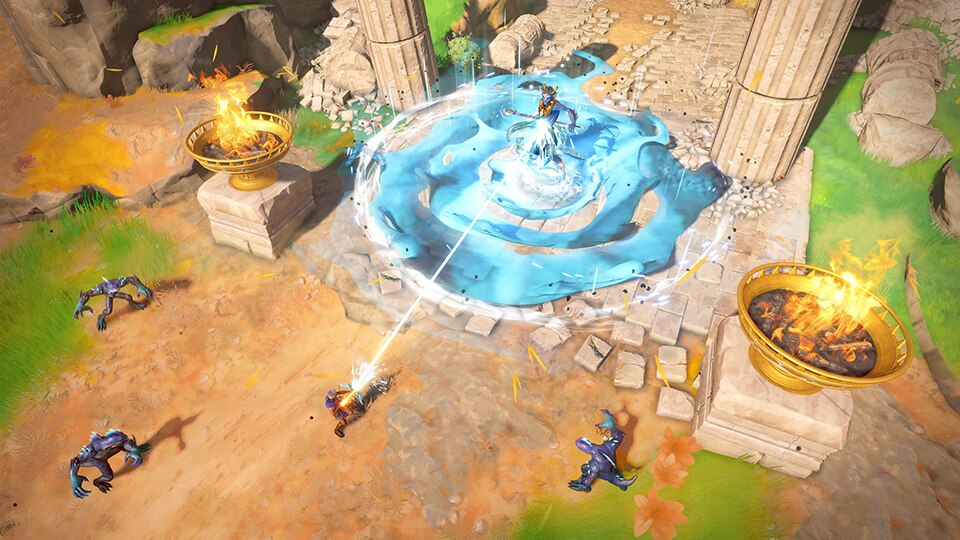 Also new are Divine Influences and Essences, which can be applied to all of Ash’s abilities and godly powers. Unlocked with sacrificial offerings found throughout the world, each Divine Influence adds a perk slot that can add elemental buffs to attacks, affect a power’s stamina consumption, and so on. By slotting in Essences found throughout the open world, Ash can do things like raise her chance of critical hits, inflict chain-lightning effects with her attacks, or even add chunks to her stamina and health meters. In addition to opening a new world of combat perks, Divine Influences let enterprising players create different builds, tweaking buffs and gear to create the perfect, devastation-wreaking Ash for their play style.

One of the central themes of the DLC is that not even the gods can create something from nothing – everything comes with a price. Key to this idea are the altars that dot the landscape; discover one, and you’ll unfog a part of the map and unlock the altar for fast travel – but only from other altars, and only in exchange for sacrificial resources you’ll find throughout the world. You can also sacrifice specific items at certain altars to request miracles, which are frequently necessary to progress, and which range from creating small land bridges to reactivating a network of jump pads spread across the islands.

Ash can also bring offerings to altars to shift from day to night, upgrade her gear and abilities, heal, or save her progress – and those last two quickly become essential. Auto-saves are infrequent, and defeat knocks you back to your last save, so manually saving whenever you can an excellent idea. (Luckily, the figs and pomegranates needed to save and heal, respectively, are plentiful no matter where you go.) Couple that with the fact that Ash can only heal herself at altars or by grabbing health orbs dropped by defeated enemies, and suddenly the stakes of combat rise dramatically. Depending on when you last saved, defeat can wipe out significant progress – and that means that if a fight isn’t going your way, running and/or hiding in the bushes might be the smartest move.

Combat in Immortals Fenyx Rising - The Lost Gods also brings a whole new dynamic. The basics are familiar – slash with the sword, break down defenses with the axe, use a bow to inflict damage from a distance – but you’ll face more enemies at a time, and they frequently arrive in waves. You’ll also need to contend with all-new threats, including the Telkhines, mer-people who wield water and ice magic; and the poison-spitting Abas, who like to burrow underground and often need to be uprooted with a Catastrophe Quake stomp. 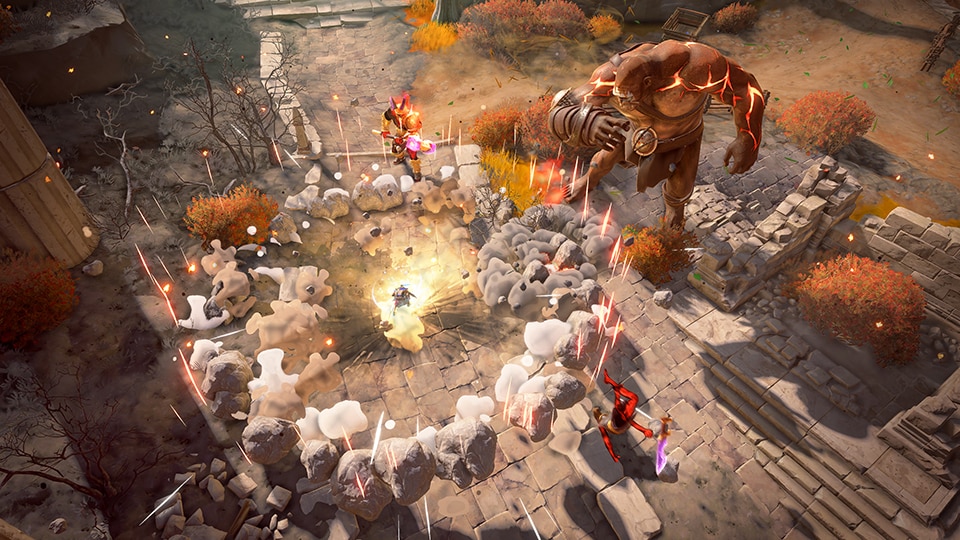 The top-down camera – which can be freely rotated but not zoomed – is key to keeping track of them all, as they tend to crowd around Ash from multiple directions and can strike at any time. If you were to focus too much on a gorgon, for example, you might miss the shield-bearer getting ready to charge in from behind you, or overlook the chimera that disappeared a second ago and is about to drop down on you from the sky. And watch out when you’ve whittled down the horde of opponents to one or two, because that’s when the next wave tends to appear.

While it introduces a whole new way to experience Immortals Fenyx Rising, Ash’s adventure features plenty of the charm, clever banter, and open-world mystery that have defined the game and its earlier DLC chapters. If you’re ready to jump in and experience the mayhem of the Pyrite Island, Immortals Fenyx Rising - The Lost Gods will be available on April 22 for Switch, PS5, PS4, Xbox Series X|S, Xbox One, PC, Stadia, and Amazon Luna as part of the Immortals Fenyx Rising Season Pass, as a separate purchase, or with a Ubisoft+ subscription.