Eagle Flight - Everything You Need to Know

Humans can't fly on their own in real life, but we can at least experience the sensation thanks to Eagle Flight. The first VR game to come out of Ubisoft's Fun House studio, Eagle Fight lets you soar as an eagle above the streets of an abandoned Paris. Vegetation has overtaken its most popular monuments. Its human population has been replaced with all manner of creatures. But as it turns out, there's still plenty for an eagle to do. We spoke with Charles Huteau, creative director at Ubisoft Montreal, to learn more about what you'll discover while exploring Paris and to get more details on the activities featured in the recent Eagle Flight 101 trailer (below).

What are the different modes in Eagle Flight?

Charles Huteau: The game has three different modes: Free Flight, Multiplayer, and Story. The Story mode contains the journey of an eagle learning to fly and conquering Paris, divided into five chapters, and some extra challenges that come after completing those chapters. In multiplayer, you can play with up to 5 other players in a "capture-the-prey" mode.

In the Eagle Flight 101 video above, we learn that you need to defeat animals that are guarding Paris landmarks. How will we go about doing that?

CH: It depends on the district, because each district has to be "conquered" differently. Some earlier districts don't have any rival animals, so you have to perform several activities just to explore your new territory and build the nest. In the later ones, however, you will have to face your rivals before claiming a district as yours. The ring challenge at the end of a chapter is always a celebration of your success, and a guided tour of your new territory.

The video mentions some of the special attacks and tactics of the rival animals. What do those look like?

CH: In the Story mode, you will encounter various enemy archetypes – the vulture, the bat and the falcon. Vultures can go fast and be a nuisance but cannot attack you back. Bats rarely attack you, but they have a powerful echo shield that can block your attacks. Falcons have all the same abilities that you do, so they can shield themselves from your Eagle Screech attack and attack you back. Then there's the Black Falcon, which is the most powerful and dangerous enemy due to its extended life and endurance.

Are the story challenges different from those missions where you're trying to take landmarks back?

CH: They are part of the story. Each conquered landmark is a step towards your ultimate goal: to build your nest on Paris' tallest landmark and conquer the skies.

What are the collectibles? Are they only available in the free-flight part of the game?

CH: You can collect fish and feathers. They are available while you are free-flying between missions in the Story mode. 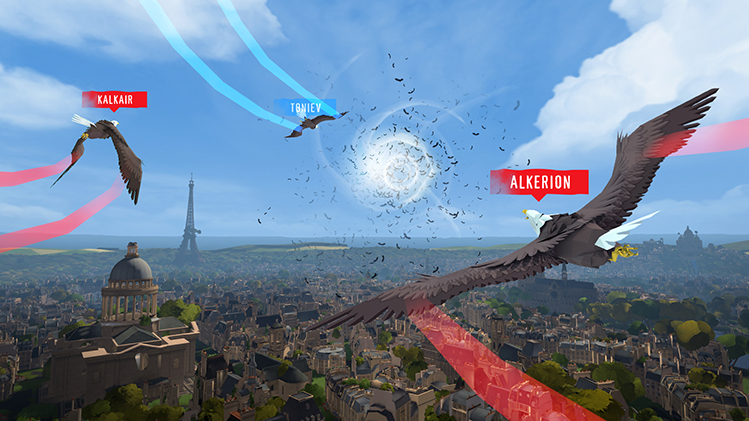 Is there a reward for tracking down all of the collectibles or completing the underground high-speed circuits?

CH: Collecting these items helps you discover and explore hidden parts of the city. As for the extra challenges, completing them gives you stars – depending on your performance – that allow you to progress further in the game.

One of the new features shown in the video is the shield. How do you acquire the shield? Is it time-based, or will a number of shots from an enemy remove it?

CH: The shield ability is unlocked at a certain point in the story, when you see some bats using it to block your shots. The shield can block only one shot, which destroys it. If the shield hasn't blocked anything in a certain amount of time, it dissolves itself, and the ability is available again after a short cooldown.

Is the entirety of the game open from the start, or will there be an unlock progression to get into different parts of Paris?

CH: You can always fly around any district at any point of the game. But in order to experience the challenges, you have to progress in the Story mode by completing the activities in order, and each district is presented to the player in a chronological order. However, certain extra challenges are unlocked alongside the main story.

What is Free Flight mode?

CH: It is an experience of flying around with other eagles above the city of Paris. When you are in the game and you choose a Free Flight mode, you are seamlessly and automatically matched with five other random players who are free-flying at the same time.

Eagle Flight is scheduled for release on the Oculus on October 18, PlayStation VR on November 8, and the HTC Vive on December 20.