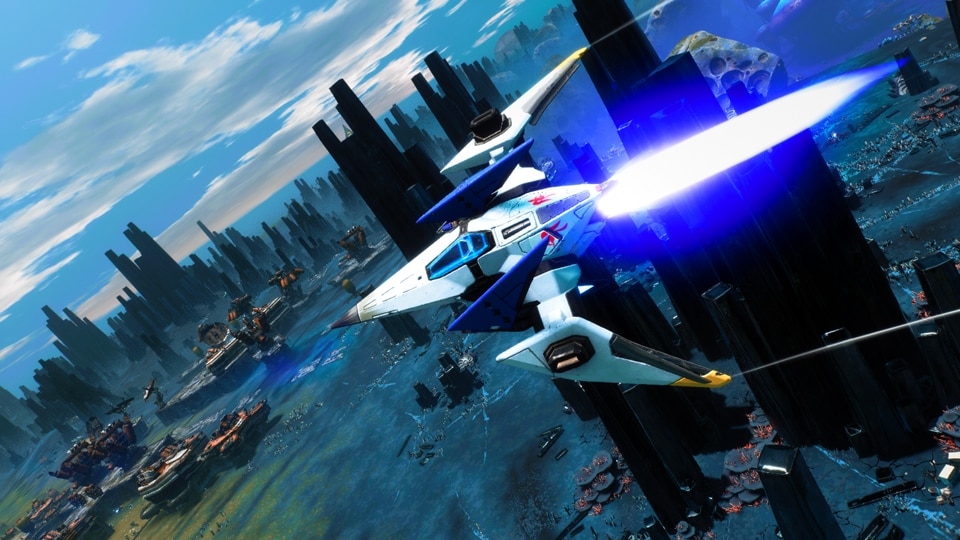 Our first real glimpse of Starlink: Battle for Atlas – which launches on October 16 for PS4, Xbox One, and Nintendo Switch – opens in space, somewhere in orbit around the planet Sonatus. We're on the trail of a creature called the Arch Prime, which is hiding somewhere on the surface far below us, and which has been planting environment-ruining Extractors across the landscape. And we're piloting an Arwing, complete with a physical replica of Fox McCloud's sharp-angled starfighter (exclusive to, and included with, the Switch Starter Edition of Starlink) attached to our controller. And yes, you'd better believe it can do barrel rolls.

After marveling at the stellar scenery for a moment – with its moons and planets and space cruisers floating just beyond the boundaries of the E3 2018 demo – we angle the Arwing down toward Sonatus and engage the Hyper Drive, cranking the little ship up to warp speed. The planet rapidly goes larger as the ship glows with the fire of re-entry, and the fog of the atmosphere gives way to a detailed landscape of alien trees and megafauna.

At this point, we could coast into normal atmospheric flight above the planet's surface. Instead, we cut the engines and plummet straight down, because that's just how we roll. The ship bounces off the ground and rights itself, nothing bruised but its ego, and settles into a smooth hover just above the surface. We can switch between hovering or flying at any time; the latter is useful for escaping enemies or covering ground more quickly, although you can't stop or move backwards while flying, and you can't do cool barrel rolls on the ground. We're also free to rocket back out into orbit with the help of boosters. It's almost time to hunt the Arch Prime.

First, though, we need to prepare, because the cornerstone of Starlink is customization. Starlink's physical starships feature interchangeable parts that snap on to each other, enabling you to customize your loadout on the fly by swapping in different weapons, wings, ship bodies, and even pilots. (You can also do this digitally via the pause menu, once your parts have been registered with the game, or by purchasing the part digitally.) For example, you can fly the Arwing in its classic configuration, with no attached weapons (in which case it fires the classic Star Fox laser cannons), or you can stick new weapons onto its wings, flip said wings upside-down, fly with no wings, or bolt on multiple new wings (which may over-encumber the ship if you stick on too many). This is all easy to do in real-time, although you can also pause before swapping out parts if you're in a tight spot.

All these parts are functional as well as aesthetic; each ship has markedly different stats for speed, handling, defense, and energy (which determines how long your weapons can fire before needing to cool down), although a ship's stats may be less important to you than its cool skull ornament and revving-motorcycle noises.

Wings boost specific ship stats (and add to its weight), while weapons – equipped two at a time and able to aim backwards if you want – are diverse, and carry elemental charges that play key strategic and puzzle-solving roles. A salvo of Frost barrage missiles, for example, can home in on targets and freeze them solid for a few seconds while you deal with other threats, while a Flamethrower can inflict burn damage and score critical hits up close. Also fun are the Levitator, which fires rockets that put enemies into slow-motion stasis while lifting them off their feet, and the Imploder, which creates gravity wells that suck up everything nearby (including you). Additionally, you can attach a wide range of mods to your ships and weapons, which impart buffs and perks – like shorter cooldown times or damage boosts for specific elements – and can be found throughout the game. And if your ship is disabled, you can instantly swap in a new one and fly it until you can find someone to help with repairs.

Pilots, meanwhile, each come with distinct skill trees that impart new perks as they level up, as well as unique abilities that you'll need to charge through combat, like Mason Rana's devastating Orbital Strike, Judge's ability to slow time to a crawl, or Razor Lemay's musical Power Chord, which unleashes rings of destructive energy in time with rhythmic button prompts. (Fox's powers are being kept under wraps for now, but don't worry – Razor took excellent care of the Arwing.)

Starlink is open-world (or is that open-space?), and while we could beat a path straight to the first waypoint – guided by transmissions from some distressed aliens – we instead spend a little time exploring. Sonatus is just one of the planets you'll explore, and it's huge, filled with opportunities for discovery, combat, and loot. There are ghost towns to ransack, hordes of enemies to battle, and friendly aliens at remote outposts who can unfog the map or sell you upgrades if you do favors for them. The planet's peaceful fauna can be scanned into your database (which involves circling around them to scan from all angles), while mineral deposits and plant life can be "plucked" by latching on with a tractor beam and pulling back until they come free. (It feels a little like fishing, without the waiting-around part.)

Also dotted across the planet's surface are Spires, mysterious alien structures that yield upgrades and other loot if you can solve their unique puzzles with specific elemental weapons. (If you don't have the right one, you can sometimes find volatile elemental barrels nearby that might do the trick if you grab and throw them.) These are heavily guarded, and approaching one introduces us to the Cyclops, a type of gun-toting bipedal enemy that comes in regular, shield-carrying, and ice varieties. The latter can freeze our ship solid with a few blasts, prompting us to mash a button to break free, although we can do critical damage by hitting them with bursts from our flamethrower while hammering them with the Shredder minigun. Meanwhile, hitting a regular Cyclops with a combination of flamethrower bursts and Frost Barrage cluster missiles inflicts thermal shock damage, staggering them while making short work of their health bars.

Returning to our main objective, the Cyclopes show up en masse when we move to attack the Extractor – a gigantic mining device wedged into the ground – which is also defended by an electrical field that disables flight, several laser-firing nodes that have to be destroyed to make the core mechanism vulnerable, and sweeping plasma beams that fry anything in their path. That last one turns out to be a great opportunity to test out our shields, which block damage at the expense of the ship's renewable energy, and the jumping capability, which not only dodges the beam but lets you float gently back to earth by holding the button.

The Extractor's core quickly succumbs to an Orbital Strike, and as it crumbles, we uncover the location of the Arch Prime, which moves surprisingly quickly given its size. Huge and armored, it's only vulnerable when its faceplates are open – or when it raises one of its four legs to strike, at which point a carefully aimed shot to the armpit brings it crashing down for a few seconds of open-faced vulnerability. Once we've dodged its attacks and its helpers long enough to break down half its health, it flees, only to try a new tactic once we catch up to it: sprouting crystalline energy weapons from its knees, while also calling down orbital lasers to knock us off-balance. Destroying all four knee-crystals stuns the beast, exposing the core in its abdomen and making it vulnerable to more pummeling until it finally goes down for good.

Starlink: Battle for Atlas launches on October 16 for Nintendo Switch, PS4, and Xbox One, opening up all the planets of the Atlas star system for exploration and adventure. For more on the game, check out our previous coverage, and stay tuned for more from E3.