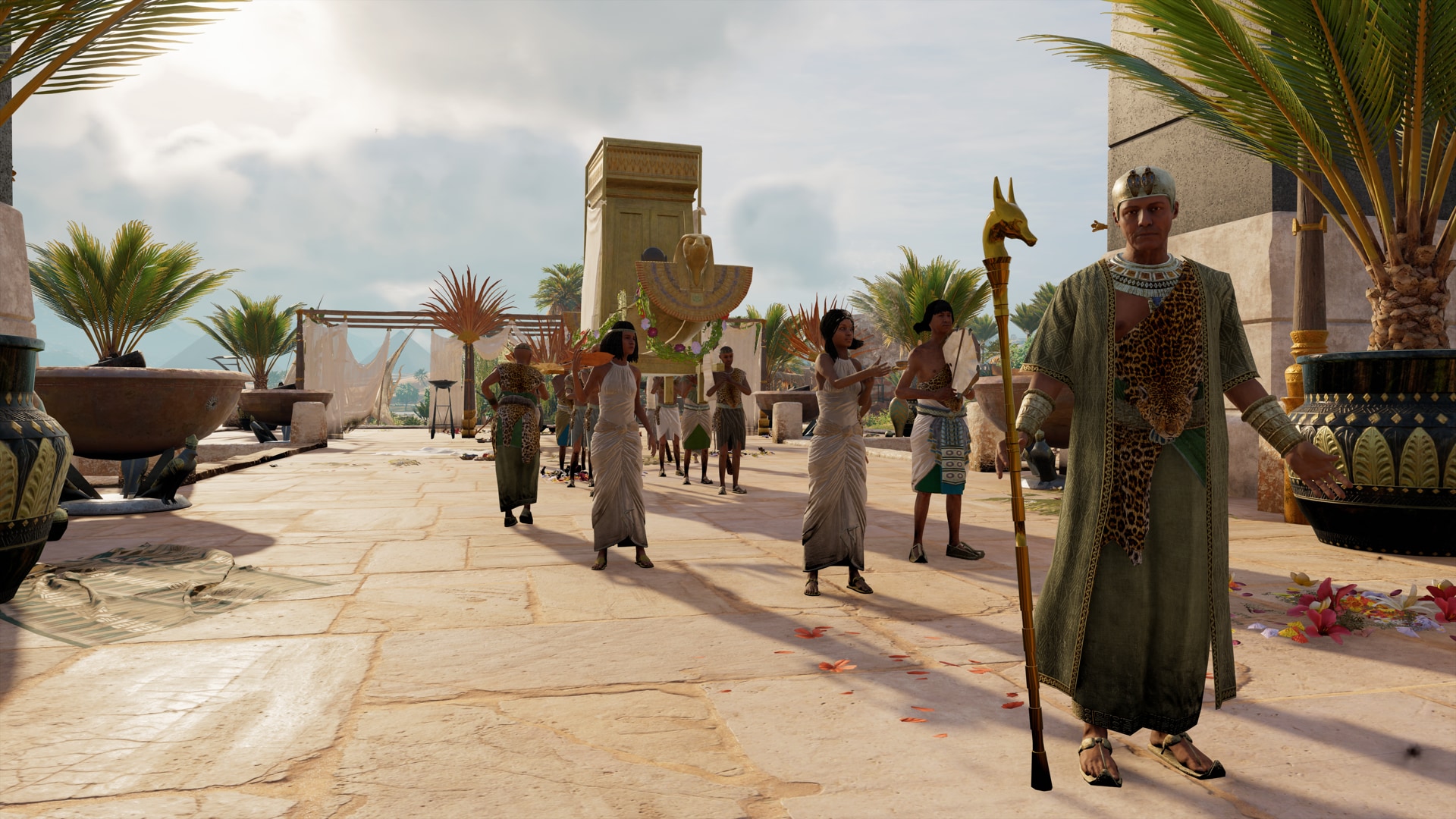 Walk around Assassin's Creed Origins' Ancient Egypt, and you'll see bakers making bread, men dyeing clothes, priest praying in temples, musicians performing in crowded marketplaces, and children playing in the street. The sleepy villages and bustling bazaars of this world teem with life, life that proceeds apace whether Bayek is there or not. These NPCs (non-player characters) aren't waiting for a story quest to begin, they are telling their own stories. In their mundane human endeavors, they create a believable world for players to connect to; the shopkeeper selling small busts of Julius Caesar is trying to capitalize on the cultural zeitgeist in the same way that a storeowner in modern-day Egypt tries to by selling Mohamed Salah jerseys.

With a brand new quest system and a focus on Egyptian culture and personal storytelling, the NPCs of Assassin's Creed Origin certainly talk the talk – but to fully sell an authentic Ancient Egypt, they needed to walk the walk as well. Writing believable characters is only half of the equation when creating an immersive world, the other half requires the people in the world to behave in a realistic manner – even the ones with no dialogue. A farmer in Assassin's Creed Origins won't stand around telling you he has work to do, he's too busy showing it by harvesting his grain and loading it onto his ox-drawn cart. This "show, don't tell" method of world building is largely accomplished through Meta AI.

"Meta AI is a combination of three things," says Charles Lefebvre, Technical Artist at Ubisoft Montreal. "It's a virtual tracking system that can track objects in the world, it's a spawning system in charge of spawning visual representation of those objects, and it's a behavior system that will push goals and objectives on those objects." In Assassin's Creed Origins, these "objects" include NPCs. These three systems of Meta AI help create a world that hinges entirely on the location and perception of the player, while simultaneously ignoring the player to create an immersive environment.

What this means for players is that each and every NPC in the game world is present and active at all times, operating on their own schedules whether the player is there or not. Take to the skies with Senu to survey the populace below, and you'll notice tags like "travelling," "sleeping," "eating," or "working," all informing you of the actions of a particular character. These motivations exist and evolve throughout the day, so that in the course of an in-game day/night cycle, a particular NPC will engage in a variety of actions that dictate where they go and what they do. Some of these actions, like sleeping or going to the bathroom, can be used to the players' advantage when trying to stealthily infiltrate and clear out outposts. These motivations aren't specific to human NPCs, either. Hippos, crocodiles, and lions need to eat as well, and when hunger strikes, the nearby soldier outpost can look quite tasty. The system not only creates believable behavior for NPCs, but is also responsible for some of the game's more memorable and unexpected moments.

I'll never forget the time I caught up with a phylake, only to discover he was already being attacked by a pack of hyenas. Or, the moment I approached a bandit camp and to find a fire raging as one of the bandits knocked an oil jug into a fire while trying to defend himself from a charging lion. These moments aren't scripted, they happen because Meta AI applies needs to every NPC and when a lion's need to eat crosses paths with a soldiers need to defend their encampment, the result is a world which feels truly dynamic.

The "virtual" state is for objects so far away from the player that they can't be seen. Since they're not visible anyway, these objects enter into virtual space and disappear entirely from view. That soldier you can't see is still going about his business, but his behavior only updates every five to 15 seconds, depending on his distance from the player.

Objects a bit closer to players exist in the "bulk" state. These can be seen, but not in great detail. Their models aren't fully rendered, and their actions update every other frame when in sight, and once per second when out of sight. Lastly, objects closer to the player than 80 meters (the furthest distance a Predator Bow arrow can travel) exist in the "real" state. They are fully rendered, and update every frame. These three states help the development team manage the technical challenge of keeping the world lively, because as Lefebvre notes, it would be impossible to provide every NPC with a personal quest. While certain characters like Hotephres, Apollodorus, and Kensa have quests, dialogue, and cutscenes to flesh them out as individuals, thousands of other NPCs need to rely on non-verbal communication to tell their stories.

So when you ride past soldiers on patrol or interrupt a dockside conversation, you're intersecting with the lives these people are living. Even if it is of no immediate consequence to you, it makes the world seem that much more real. Authenticity can't be communicated through writing alone, Meta AI allows it to be shown through behavior. The woman harvesting crops to make beer may never utter a single word, but follow her around for a day and you'll see as she works all day in the blazing sun before returning to her home to socialize with friends, eat with her family, and sleep in her bed. It's a simple story, but one that's familiar enough to feel real and provides insight into the life of one of the thousands of NPCs that color the world of Assassin's Creed Origins.