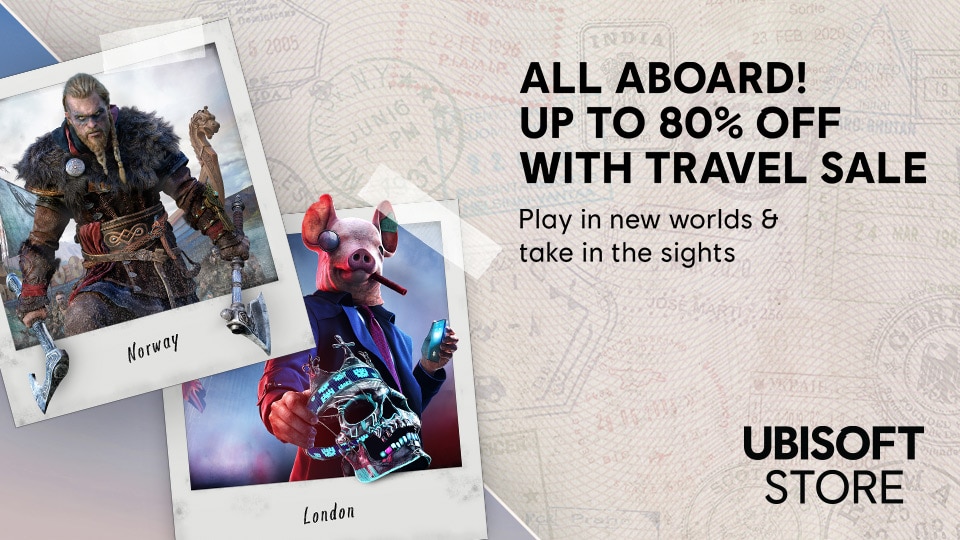 Missing Travel? Go on a Journey with the Ubisoft Store Travel Sale

We know the big appeal of travel is to do the fancy thing and physically go to a place, eat food, take pictures, and all that stuff. But what if we were to tell you that the Ubisoft Store travel sale is ready to take you on a trip… of the mind!? Yes, it’s true; you can still do some of that same travel stuff, but virtually! I know what you’re thinking: “How did you wizards manage to come up with this one?” Well, friend, thanks to the miracles of modern science and major advancements in videogames, Ubisoft is able to transport you to astounding recreations of real-world places, both historical and modern, along with some places inspired by cool destinations from around the Earth. At these prices, what are you waiting for? Let’s go!

If you feel like going to a place and time you’ve never been (unless you’re hundreds of years old, which, congratulations on that), might I recommend an Assassin’s Creed game? Take a trip to 9th-century England in the most recent release in the series, Assassin’s Creed Valhalla, for up to 33% off. Pack up and leave your beloved Viking home in Norway for the shores of England, where you can let your inner Viking raider loose as you lead your clan to glory.

If you want to go even further back in time, you can travel to Ancient Egypt in Assassin’s Creed Origins and visit all its wonders, including the Pyramids of Giza and the Sphinx, for up to 80% off. You can learn a lot about the beginnings of the Assassin Order, and plenty about normal, everyday Egyptian culture and practices of the time, too. Like baking bread!

We know sand is coarse and gets everywhere, so maybe a different locale is on tap for you? Perhaps a journey to the Caribbean is more your speed? Yes, there is sand there too, but hear us out! With Assassin’s Creed IV: Black Flag, you’ll be instantly transported back to one of piracy’s most infamous ages and encounter its most nefarious pirates, like Blackbeard. Honestly, one of my favorite things about Black Flag is just to sail around at my leisure, take in the beautiful scenery, and maybe spot a whale or two – but if you want to pillage and plunder ships and coastal forts, you can do that too. It’s your vacation, after all.

At this point, you’re probably asking, “What about Ancient Greece, my favorite time period and possible destination I’d like to travel to?” Wow, are you the Oracle of Delphi? It just so happens Assassin’s Creed Odyssey is set in that very period. Now at a discount of up to 75% off, you can explore incredible architecture and travel throughout the Greek islands, all the while encountering a cast of incredible characters and mythical creatures.

And who could forget the Italian Renaissance? Take some time to immerse yourself in the art, architecture, the beautiful rolling hills, and the … wait, assassino! Assassin’s Creed II features one of the series’ most beloved leads in Ezio Auditore da Firenze, who embarks on a journey to avenge his family and take on the Templars across famous regions including Florence, Venice, and Rome.

You considered the past, but what about the near future? In Watch Dogs: Legion, you can take a trip to a London that has maybe seen some better days, but at least it’s in the future. You can still visit the future versions of usual tourist hotspots like Big Ben, Piccadilly Circus, and the Tower of London, but you might be asked to politely help take down a massive criminal ring with a group of fun-loving hackers. Plus, the game is discounted for up to 60% off right now.

Not many people know this, but the real “San Francisco treat” is Watch Dogs 2 because of its remarkable recreation of the City by the Bay and endearing cast of misfits that make up DedSec. There’s so much to do, you may want to plan your trip ahead of time: Check out Coit Tower. Visit the tall pointy building. Take a refreshing swim underneath the Golden Gate Bridge. Drive really fast off San Francisco’s infamous hills. Fun!

The Division 2: Warlords of New York

If there’s anything the East Coast can hang its hat on, it’s big, stately landmarks that are fun to visit. Enter the halls of the White House and the Smithsonian in Washington, DC, and then head up to Lower Manhattan in the Warlords of New York expansion to take in the sights of Wall Street and Battery Park. Nowhere else will you find this many famous skyscrapers and monuments in a single package – and you can even explore them with friends while battling post-Collapse gangs for control of the streets! Get the base game and expansion for up to 70% off.

Everyone loves tropical islands, even if they’re dealing with a small pirate problem at the moment in Far Cry 3. But don’t let a little civil conflict between armed locals and bloodthirsty marauders stop you from enjoying sun-soaked (and shark-infested) beaches, majestic wildlife (also bloodthirsty), and gorgeous vistas best enjoyed by hang glider (oh no, what if you fall and have to deploy your wingsuit to skim gracefully across the landscape at high speed before touching down in a clear blue cenote filled with sunken ruins and hidden treasures? That would be terrible).

If warm sandy beaches and palm trees aren’t for you, consider the snowy Himalayan peaks of Kyrat in Far Cry 4. Return to your remote homeland as Ajay Ghale, where you can help the Golden Path rebellion overthrow tyrannical king Pagan Min. While you’re at it, why not ascend to the skies in a gyrocopter to take in the beautiful vistas, mountain villages, and AAA! EAGLE! ANGRY EAGLE! LAND NOW! NO! HONEY BADGER! PULL UP! AAA! WATCH OUT FOR THAT ROGUE ELEPHANT! Anyway, it’s great.

For a rustic getaway closer to home, look no further than Hope County, Montana, a vast rural paradise of breathtaking hiking trails, secret fishing spots, and violent cultists herding people into bunkers oh great it’s always something. In Far Cry 5, you can teach the people trying to ruin your vacation a lesson by becoming an unstoppable force of wrathful destruction, but take time along the way to make friends with some of the locals and tame predators of Hope County – if nothing else, they’re real good at providing support in a fight while you perfect your shovel-throwing form. Travel truly is enriching. Plus, Far Cry 5 is now up to 80% off.

The Ubisoft Store travel sale ends on August 4. For more news from inside Ubisoft, be sure to visit our dedicated news hub, and check out the Ubisoft Store for more deals on Ubisoft games.