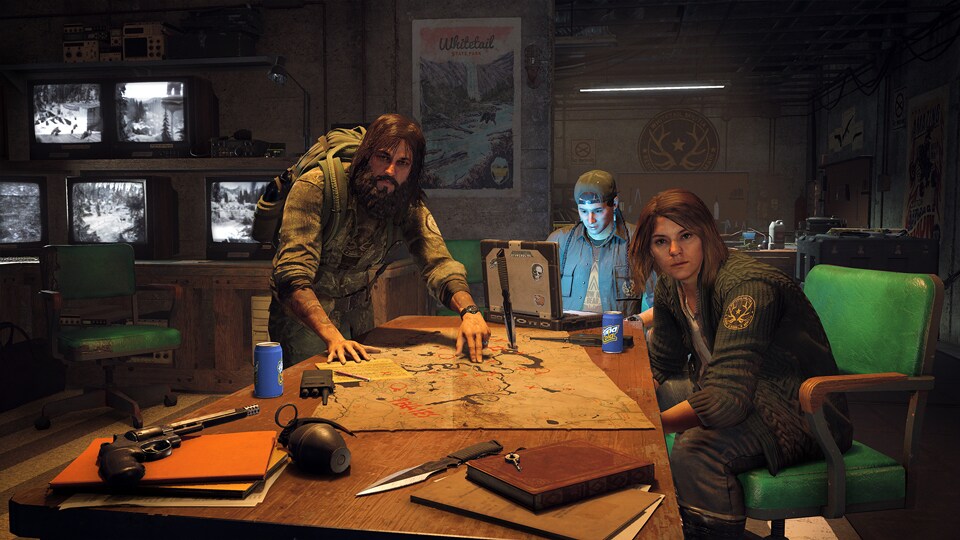 Far Cry 5 launches in just under a month, so it's time to visit a new region of Hope County: the Whitetail Mountains, a rugged land of trees, ziplines, and tons of opportunities to snipe cultists and blow stuff up. Montana's mountain country is a paradise for stealthy players, with plenty of forests to hide in and wingsuit-friendly cliffs for getting the drop on enemies, and it's home to some of the toughest people you'll meet in Far Cry 5.

Before we get a chance to journey into the mountains, however, Far Cry 5 begins in the passenger seat of a helicopter. A U.S. Marshal has come to Hope County to arrest Joseph "The Father" Seed, leader of The Project at Eden's Gate cult. As a rookie sheriff's deputy, you get to ride along with the marshal, the sheriff (who thinks this is a terrible idea), and another deputy. Landing at the cult's compound, you walk straight up to Joseph's chapel unchallenged, and slap the cuffs on him over his followers' protestations. As you run back to the landing zone, captive in tow, the cult starts getting rowdy, ultimately crawling all over the helicopter as you take off. If you're looking toward the cockpit, you'll see one of them climbing up the windshield, only to jump straight up into the rotors – which sends you spiraling back to Earth.

The good news is, everyone important survives. The bad news is that the cultists are there to drag everyone out and take them prisoner. Fire blocks them from you and the marshal, so the two of you flee into the night, getting into shootouts with cultists, escaping in a truck and ultimately crashing into a river. The marshal is immediately nabbed by the cult, but you're dragged off by a doomsday prepper named Dutch, who tells you your little snatch-and-grab fulfilled a cult prophecy. Now the cult thinks a societal collapse is imminent, and they've risen up to conquer Hope County and forcibly convert its citizens. It's up to you to undo the mess and take back the county, starting with Dutch's Island.

Once you manage to pacify the island cultists, it's time to head up to the Whitetail Mountains. Looming over them is the presence of Jacob Seed, brother of Joseph and one of the cult's three Heralds. As merciless as he is scarred, Jacob is an Army veteran who's fixated on "culling the herd" and killing anyone who doesn't meet his standards of strength. He also uses psychological conditioning to bend others to his will, creating fanatical fighters and fearsome trained wolves called Judges. Create enough mayhem to get his attention, and he'll turn those mind-control skills on you, hurling you into a hallucinatory, drug-fueled training course as you build your resistance and wrest back control of the Whitetails from his goons.

Getting to Jacob through his army of zealots won't be easy, but you'll have some powerful friends in your corner. The Whitetail Militia, led by shaggy, bearded Eli, have been fighting a losing battle against Jacob's troops, and you're just the help they need to tip the scales. They'll give you most of your missions in the region, telling you to rescue missing militia members or help set up a pirate radio station, but your real support on the ground comes from three other operators with their own axes to grind against the cult.

First up, there's Hurk, whose full name turns out to be Hurk Drubman, Jr. Hurk lives in the shadow of his cigar-chewing politician father, who thinks he's an idiot but still sends him along to help watch your back. Toting a rocket launcher and his usual dimwitted enthusiasm, he's great for those moments when you want to charge into a cult outpost, guns blazing, and just annihilate your foes as quickly as possible. So is Cheeseburger, a tame bear who'll join you after you liberate his home – a tourist destination known as the F.A.N.G. Center – and give him a couple of salmon. While Cheeseburger has issues with diabetes (possibly from eating too much of his namesake), they haven't slowed him down at all, and watching him rip through squads of cultists and toss them around like ragdolls adds an extra touch of brutality to your raids.

If you're more of a stealthy player, you'll want to stick with Jess Black, a scarred loner who hunts with a bow and has a vendetta against a flamethrower-carrying zealot called "The Cook." Free her from the local lumber mill and help her take down The Cook, and she'll join your growing resistance, at which point you may find yourself impressed by her ability to take down helicopters with just her bow and a flaming arrow.

You can bring two Guns for Hire into battle with you at a time, drawing from a pool of specialists, like the three mentioned above, as well as any of the civilians you recruit to the cause. (For extra fun, you can pair up two specialists that don't see eye to eye, like Jess and Hurk, and listen to their banter.) And if you want a really versatile partner – one who can do everything you can do, cover angles you didn't even think of, and laugh at your jokes – Far Cry 5 also lets you play through the campaign with a buddy in co-op. Not only does this let you inventively rip up Hope County alongside a friend, but you'll still be able to roll with a computer-controlled companion. Your partner won't keep the progress you make in their own game, but they will get to hang on to any weapons, money, or skills they earn while you mow down cultists together.

The battle for Hope County begins on March 27, when Far Cry 5 launches on PS4, Xbox One, and PC. For more on the game, check out our previous Far Cry 5 coverage.