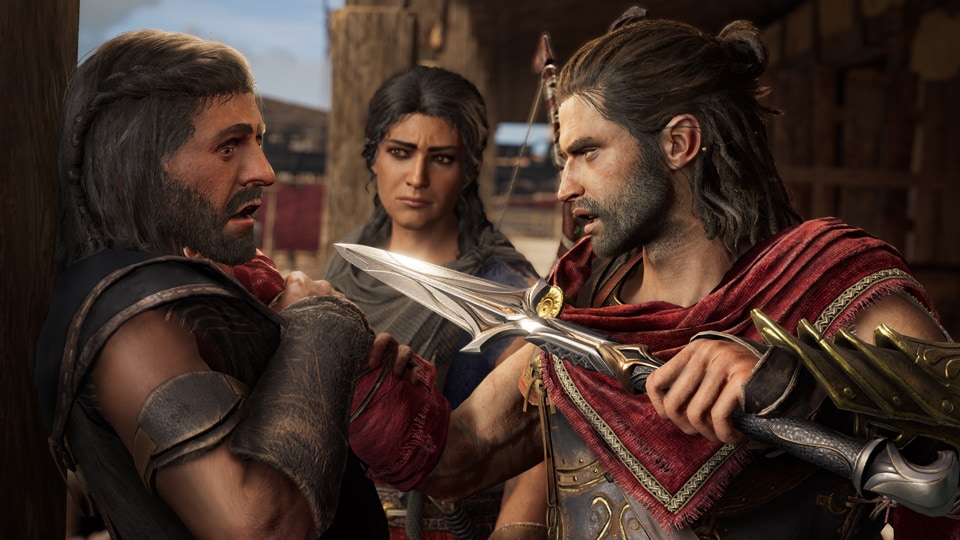 Shadow Heritage, the second episode of the Legacy of the First Blade story arc for Assassin's Creed Odyssey, reunites players with Darius, the mysterious first wielder of a Hidden Blade. Set amid the shipyards of Achaia, the seaside region just southeast of Kephallonia, it's a chance to uncover a new conspiracy by the Order of the Ancients, and to add a devastating new weapon to your ship.

Available starting January 15, Shadow Heritage unlocks once you've completed Legacy of the First Blade's first episode, Hunted. Intended for players level 28 and above, it sets you on a quest to free Achaia from the grip of a terrifying warlord who calls herself The Tempest. And where Hunted put a focus on stealth, much of Shadow Heritage's action unfolds on and around the Aegean Sea, as you pit the Adrestia against The Tempest's powerful fleet.

The balance of power at sea hinges on the Chimera's Breath, a powerful superweapon under development by The Tempest. She plans to use it to terrorize the waters around Achaia, but you can turn it against her by stealing the plans for yourself, and then going on a treasure hunt to find the documents to decode them. The Chimera's Breath turns out to be a pair of prow-mounted flamethrowers that can rapidly overwhelm and temporarily paralyze enemy ships at close range. Not only does this make them easy prey for your archers, but it adds fiery new oomph to ramming enemy vessels.

You'll get a new way to take down foes on land as well. Shadow Heritage adds a new Hunter ability, Rapid Fire, which lets your misthios loose a steady stream of arrows, with no reloading, for as long as your adrenaline meter and arrow supply holds out. This works with every kind of arrow in your inventory, letting you quickly poison foes or set them on fire, and upgrading the ability lets you fire even faster. This also comes in handy while you're hunting a new branch of cultists, the Order of the Storm, and the tough-as-nails mercenaries that The Tempest has hired to hunt you and Darius.

Shadow Heritage will also bring your misthios closer to Darius' son or daughter, Natakas or Neema (depending on whether you're playing as Kassandra or Alexios). This is a chance to see a softer, more human side of the story arc's new heroes – and of its villains. Your deepening bond with Darius' son or daughter is a central part of the plot, but can there ever really be a peaceful future for those who live by the sword?

Probably not, because Legacy of the First Blade will conclude in March with the third episode, Bloodline, and there's a lot more on the horizon for Assassin's Creed Odyssey. More Lost Tales of Greece are coming for free to all players, and the second post-launch story arc, The Fate of Atlantis, is coming soon to Season Pass holders, who'll also get Assassin's Creed III Remastered and Assassin's Creed Liberation Remastered this March.