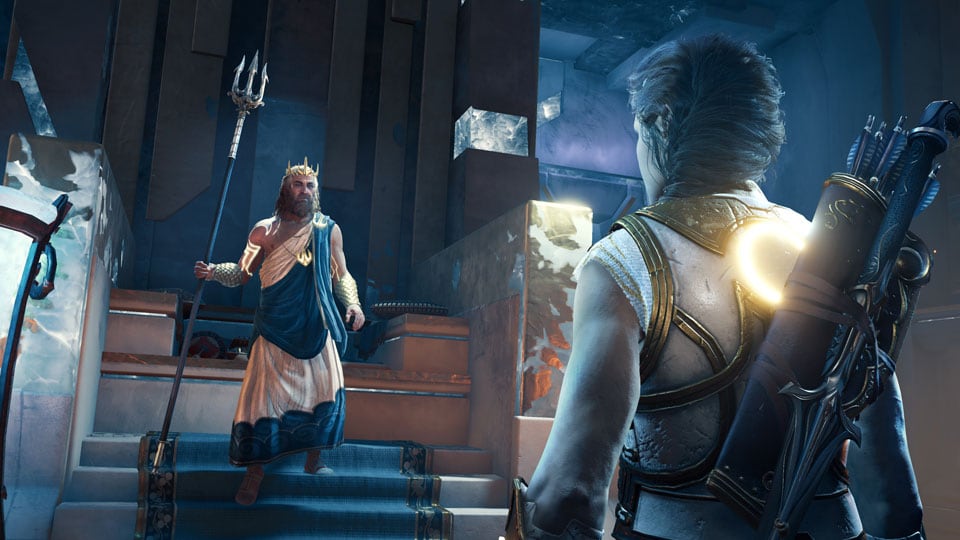 Judgment of Atlantis, the third episode of Assassin's Creed Odyssey's The Fate of Atlantis story arc, pulls players out of the Greek afterlife, and into its titular watery city. Atlantis is a gleaming center of science and technology, where humans and Isu – Assassin's Creed's mysterious First Civilization – walk side-by-side in an experiment to create a perfectly balanced society. Under that shining exterior, however, lies a cesspool of corruption and incompetence, where more than a few Isu citizens seem to chafe at the idea of laws protecting humans – and you've been put in charge of deciding its fate.

If Fields of Elysium was about pushing back against the absolute control of Persephone, and Torment of Hades was about surviving the surreal chaos of the Underworld, Judgment of Atlantis is about finding balance between the two extremes. As a human-Isu hybrid, you're seen as a living attempt to achieve that balance – and so you've been appointed Dikastes, a ruler-judge who answers only to Atlantis' leader, Poseidon.

You have two major goals during your stay in Atlantis; first, as Dikastes, your job is to judge the city and its inhabitants. And there's a lot that needs judging; Atlantis' stumbling leaders need help managing the restless human population, which sometimes involves crushing rebellion or staging bloody arena fights. You'll need to solve ethical dilemmas and settle disputes between citizens, as well as investigate forbidden research – and as if that weren't enough, someone's gone and set a werewolf loose in the streets.

Your second goal is to finally unlock the full potential of the powerful Staff of Hermes Trismegistus – along with Alexios or Kassandra's Isu DNA – by scanning data caches, message tablets, and other artifacts. This wisdom literally opens new doors, as each knowledge tier you attain lets you pass through certain gated barriers, which in turn lets you access more insights and more powerful loot.

The catch is that most of those insights and loot are guarded by Isu soldiers, who patrol the fortresses and archives you'll need to raid in your quest for Isu enlightenment. In addition to the superpowered regular troops and bronze Kolossi from previous episodes, you'll also face powerful masked commanders who can absorb (and deal) tons of damage, and who will keep you on your toes by teleporting and firing energy beams like the Kolossi do.

New abilities will help you make short work of these threats, however. By finding Keeper's Insight tablets, you can enhance three of your existing skills to become something completely different. These don't require Ability Points to unlock, although the underlying Ability needs to be fully leveled up, and you can switch between the enhanced and original versions at any time. The new Abilities are:

You'll also be able to forge three Legendary new Isu weapons – a mace, a spear, and a dagger – and choose to infuse them with unique Assassin, Hunter, or Warrior enhancements. Create an Assassin mace, for example, and you'll be able to spread the damage from your stealth attacks to any nearby enemies, which makes Rush Assassinations incredibly deadly against close-knit groups. Each of these weapons can only be forged once, however, and making even one means you'll first need to hunt down three of the nine Adamant ingots scattered across Atlantis.

To become truly unstoppable on the battlefield, you can hunt down all five pieces of the Dikastes' Armor set. Each piece of it comes with a powerful buff, and wearing all five at once triggers an Isu Enhanced state if you get hit. This makes you invulnerable and immune to any adrenaline-sapping effects for 15 seconds, and takes just 60 seconds to recharge. To find the full set, you'll need to track down five of Atlantis' mightiest Isu warriors, the Polemarchs, and fight them – along with any nearby guards – for their stolen pieces.

You'll need every advantage you can get to survive the challenges Atlantis will throw at you. Investigating the hidden recesses of the city will bring you face-to-face with horrors far beyond anything else you've encountered so far, adding an even darker dimension to the morally ambiguous First Civilization.

You can start uncovering Atlantis' mysteries yourself on July 16, when Judgment of Atlantis arrives for Assassin's Creed Odyssey Season Pass owners, and for those who've purchased The Fate of Atlantis story arc. To start it, you'll need to be at least level 28 and have finished the first two episodes, Fields of Elysium and Torment of Hades. You can also jump straight into The Fate of Atlantis story arc with a special shortcut option, which starts you at level 52 – although you won't be able to carry that over to your main game save, or earn achievements.