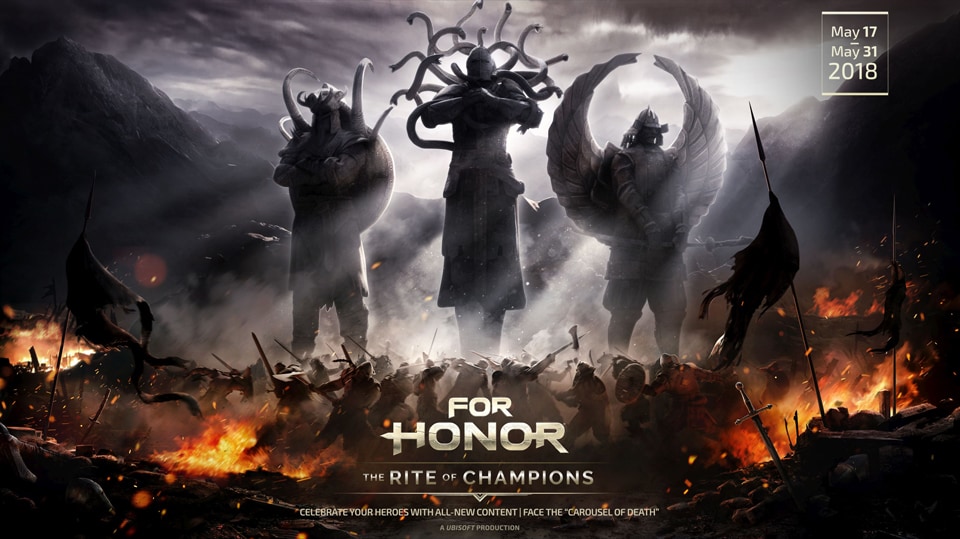 For Honor's sixth season of post-launch content, titled For Honor: Hero's March, is live now, adding a new map, a new Visual Collection feature for managing cosmetic items, major reworks for the Peacekeeper and Orochi, and a new live event – The Rite of Champions – that will run from 10:00AM PT on May 17 to 5:00AM PT on May 31.

The Rite of Champions tells the story of three legendary, bygone Heroes through 18 special community contract orders, which spawn three per day and will focus on a specific Hero. The legend of Belval the Medusa can be experienced from May 17 to May 21, while Musashi the Crane takes the spotlight from May 22 to May 26, and Heidrek the Warthog will be the focus from May 27 until May 31. The event also includes a new mode: the Carousel of Death, a 4v4 match in which victory is achieved by downing all members of the opposing team before any of them can respawn. Every death extends your wait time to respawn by five seconds, meaning the more kills your team gets, the likelier you are to wipe your opponents.

In addition to the gear you'll get from just playing the game, you'll also be able to get your hands on special loot, including weapon sets, effects, ornaments, and battle outfits during The Rite of Champions. Then, between June 4 and June 8, all players will also get additional rewards depending on their Heroes' reputation levels; if any of your Heroes are at reputation level 50 or higher, you'll get an exclusive Emblem Outline and for every Hero you have with a reputation of 50 or above, you'll also receive seven days of Champion Status (which will also be available at a 30% discount during the event, and will increase the odds of getting special event items). Lower-level Heroes won't be left out; for every Hero you have with a reputation between 1 and 49 from June 4-8, you'll get an XP boost ticket.

Players who really want to get their hands on something special have their choice of three new mask outfits patterned after Belval, Musashi, and Heidrek, which will be available at a discounted price of 15,000 Steel for the first week of The Rite of Champions, and for 20,000 Steel after May 24. From May 24 until June 4, you can also unlock all special event items for one Hero – including a faction-appropriate mask outfit and a Sword in the Stone emote – with a special The Rite of Champions bundle for 30,000 Steel (which will be reduced in price if you've already looted any of the included items). Additionally, all players will be able to battle as the Season Pass Heroes during the event, and can fully unlock them for a discounted price of 10,000 Steel. Starter Edition players will also be able to unlock regular Heroes for 5,000 Steel each.

The Season Six content is available to all For Honor players as a free update, and comes on the heels of a series of improvements that include dedicated servers. "Since the launch of the dedicated servers, we've had a lot of players come back to the game, which makes for an even more exciting battlefield," says Game Director Damien Kieken. "Dedicated servers have greatly improved the player experience and game stability, and have reduced the number of errors players experience. Players no longer have to deal with host migrations or game resyncs, and are no longer affected by players with a weaker connection.

"We are still working on optimizing the servers for an ever better experience, but the current stability also helps us focus on other cool features that will come up in the future," says Kieken.

The Rite of Champions beckons, and you can answer the call now on PS4, Xbox One, and PC. And for more on For Honor, be sure to check out our previous coverage.