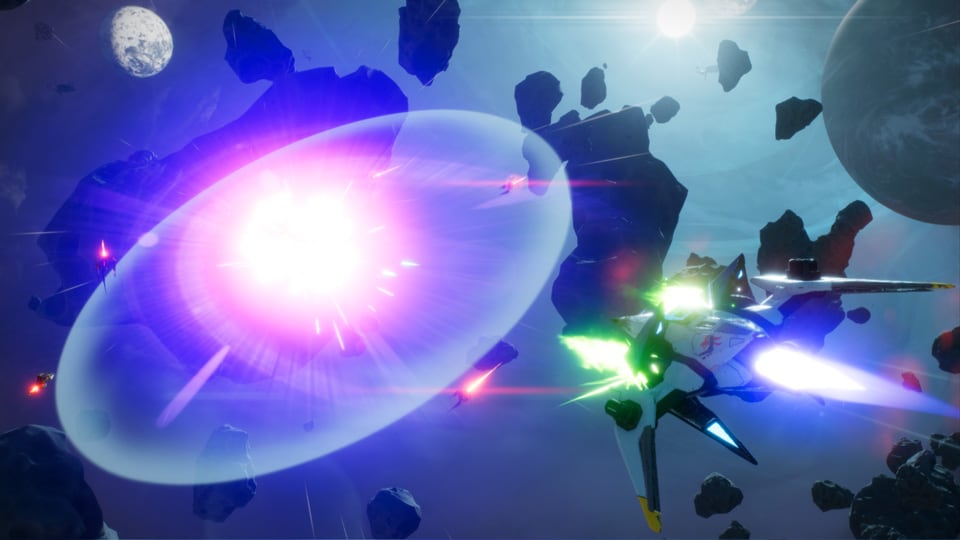 The sprawling star system of Starlink: Battle for Atlas is now open for exploration, giving you seven planets to explore and a sinister Legion to fight with customizable starships. As you blast off to discover new worlds, you'll need to forge alliances with helpful aliens and manage scarce resources to extend your reach and abilities – and we've got some tips for you on how to make the most of what Starlink offers. Check out the video below, and read through our pointers to get an edge in your fight to reclaim Atlas.

Make Some Friends, Make Some Money

When you arrive on a new planet, your first priority should be to make friends with Observatories, which survey the surrounding landscape and reveal interesting places on the map. Observatories, like other outposts, can be recruited to your alliance if you do a quick mission for them. Once they're in your corner, upgrading them extends their sight – but for that, you'll need plenty of Electrum, Starlink's main currency. So your next step should be to ally with Refineries, marked by a pickaxe icon. These mining platforms will periodically kick a chunk of their profits your way, and the more you make friends with, the more Electrum they'll send you.

Upgrading Refineries – and most other things in Starlink – requires Nova, a resource that's in much shorter supply. Tackling certain missions or tasks can reward you with Nova (a peek at map icons will tell you if it's part of the reward for an activity), but here are a few consistently reliable ways to get your hands on it:

A big part of the fun in combat is experimenting with different weapon combinations to discover new destructive effects. For example, using Fire and Frost weapons together does massive Thermal Shock damage to most targets. Gravity weapons create vortexes that can then be infused with extra elemental oomph, and Kinetic weapons are good for cutting through elemental resistance. Meanwhile, the Stasis-charged Levitator can lift enemies into the air, making them easy targets for a blast from another weapon.

Elemental charges are also key to solving the puzzles of the Warden Spires, which can grant serious loot and insights into the history of the planet. Some of these require Gravity or Stasis weapons, but don't worry if you don't have those. You can find explosive canisters nearby – usually just behind the puzzle itself – that carry the right charge; the trick is figuring out how to use them effectively. (These canisters are also great for throwing at enemies for huge elemental damage.)

Also, the Flamethrower's wide blast makes it great for quickly smashing groups of treasure crates. Once free, the loot flies to you, so you don't have to wait around to grab it. If you're playing with a physical ship and can't find your flamethrower to snap it on your wing, though, don't sweat it. Once linked, physical items stay in your digital inventory for seven days – just detach the mount from your controller, switch over to playing digitally, and use the Loadout menu to swap in the weapon you want to use. As an additional bonus, playing digitally lets you store up to three preconfigured loadouts for rapid switching, which comes in especially handy if you're facing down a lot of enemies with different elemental charges.

Get Around in a Hurry

Speaking of Warden Spires, you can use the Equinox menu screen to unlock an ability – Warden Network – that lets you instantly travel to any solved Warden Spire in the Atlas system, instantly bridging the vastness of space in seconds. Similarly, the Getaway Drive ability lets you do the same for any defeated Outlaw hideouts, which are especially useful if you need to quickly get to an off-planet location. And you don't need to unlock anything to fast-travel into the orbit of a planet you've visited; just point your ship at it while in space and hold down the button for an instant jump.

Your starships are much more than cool-looking weapons platforms; they're versatile, customizable, and upgradable vehicles that can be fine-tuned for a variety of tasks. For example, did you know that you can snap your wings off to fit into tight spaces? Playing wingless is totally an option in general, too, although you'll miss out on the stat buffs that wings can grant.

Another way to tinker with your ride is through ship and weapon mods, which you'll get regularly amongst other loot. These can give you cool perks like elemental resistance, damage boosts, longer-lasting energy ammo, and tougher armor. Some of them boost your XP and Electrum gains, too, which is a big help early on.

Also, if you unlock Mod Fusion in the Equinox Upgrades menu, you can combine your poor, neglected low-level mods into more powerful versions. Speaking of mods, be sure to check out the Ubisoft Club, where you can cash in points earned by playing Ubisoft games to unlock packs of Rare mods designed to give you an early edge over the Legion.

The Equinox Upgrades are the key to unlocking your starships' full potential; upgrading your Freight & Cargo lets you carry more than five items, for example, and the more you can carry, the more you can sell to outposts at once – and as you sell to them, you'll also slowly contribute to their next upgrade. Just remember: organic items go to Observatories, and metal ones go to Refineries.

If you encounter an item that's too big to stash in your ship (and isn't immediately needed for a puzzle), your best bet is to haul it to the right kind of outpost, which will net you tons of upgrade juice. These heavier objects tend to prevent you from flying while you're carrying them, but chunks of corrupted nova won't, and outposts love those too.

With all of this upgrading going on, don't neglect your pilot! As you level up, you'll earn Ability points that can unlock new perks, increase the potency of their special attacks, and even extend benefits to every pilot on your team. And remember: once charged, their special ability can rapidly turn a fight in your favor, so be sure to use them when you're surrounded or up against a tough foe.

Starlink: Battle for Atlas is out now on Nintendo Switch, PS4, and Xbox One. For more on Starlink, check out our previous coverage.