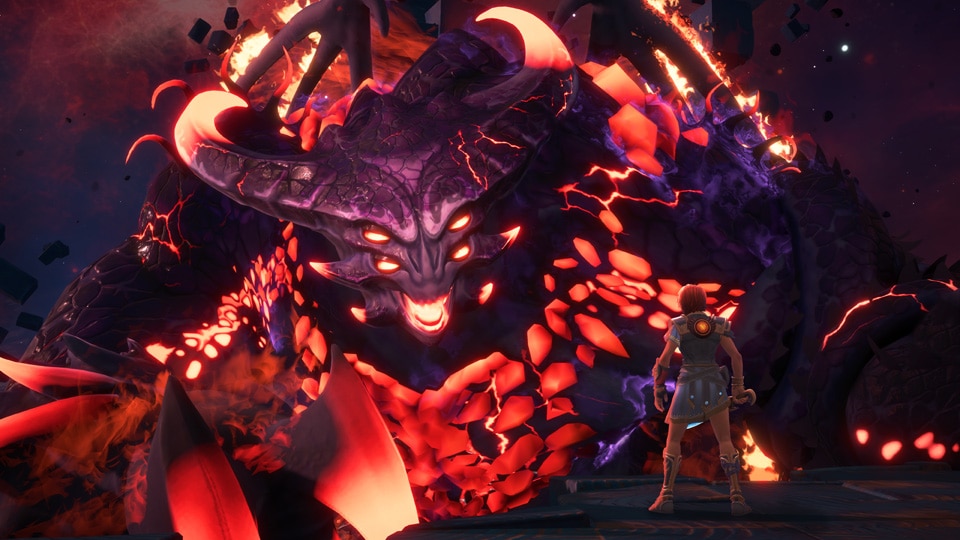 Immortals Fenyx Rising’s open-world romp through Greek mythology is coming on December 3, when players will be able to take control of Fenyx, don the Wings of Daidalos, and explore the vibrant, monster-infested, and highly destructible environments of the Golden Isle. Our latest hands-on with the game took us to the impressively lush Valley of Eternal Spring to save the goddess Aphrodite, but it’s just one small slice of a game that combines fast combat, vertical exploration, and reactive physics to create a lighthearted epic quest. To find out more about how it came together, we sat down with Game Director Scott Phillips for a chat about winged combat, resourceful enemies, and putting a distinctive spin on ancient myths.

What were you able to do with Immortals Fenyx Rising with the extra time that you wouldn't have been able to do before?

Scott Phillips: One of the key things was, we got the time to play the game and really evaluate all the feedback that we got. Being able to get that much feedback from surveys and understand, “OK, what are the things that are really standing out to people as positive, and what are things we need to work on improving?”

Out of that, we came up with a big list of things we wanted to do on gameplay, narrative, and visual style. I think on all of those, the primary thing was improving quality. So with the gameplay, we added a lot more depth to the progression, to the gear, to the enemies and their moves. Visually, we were able to add a lot of quality to all of the enemy characters, all of the gods, and the world as well, and we also revised the narrative quite a bit. We changed who the narrators were, which obviously changed a bunch of elements across the entire game.

We also had a really great initiative that we called Fenyx Days, where once every two weeks during a sprint [a short period of development time focused on a single goal or area of improvement], everyone on the team had one day – the last Friday of the sprint – where they were able to work on whatever they felt was going to benefit the entire game. It was, “OK, what can you deliver? What do you think? What's not being scheduled that should be accomplished, that should be done to help the team, either a tool or an idea in the gameplay?” Or anything they could think of. And I think that concept really helped bring the team together around a bunch of unique ideas that ultimately made it into the game. 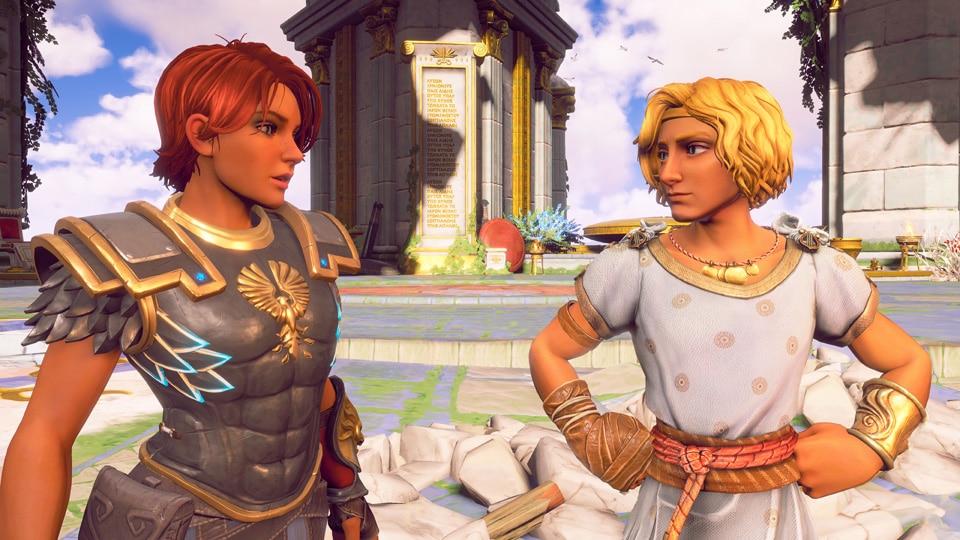 There's a big emphasis on the Wings of Daidalos in Immortals Fenyx Rising. It feels like they're more than just a tool for traversal; they factor into combat, into everything Fenyx does. How did this become such an aerial game?

SP: Very, very early on, one of the first things we prototyped was a double-jump. We were starting from the Assassin's Creed Odyssey code base, so we had parkour – but I felt like I really wanted it to be more free. I want to be able to single-jump, double-jump, and then triple-jump. I wanted to use the three-dimensional space of our world more actively.

Even back on Odyssey, our world director was suggesting, “Hey, it would be nice to be able to get down from some of the high mountains in a quicker way, navigationally.” So that idea had already started, and we wanted to make the player more active and take more risks in their traversal, so we wanted it to be more dynamic. The wings fit into that really well, with the gliding, and we wanted to make it a consistent visual and message throughout the entire game that they were an iconic part of the character. So it had to be spread throughout every move and every animation that fit, through traversal, combat, or puzzles, or anything else.

There are a lot of huge enemies in this game; did that come out of wanting players to use the wings to fight more than just flying enemies?

SP: Yeah, the two ideas sort of came from different directions and meshed together really well. We wanted giant enemies, like the Minotaurs or the hecatonchires. When you think of mythology, you think of these larger-than-life, epic things, and we wanted to fight these giant enemies, but we didn't want to just be hitting toes. We wanted you to feel like you had an actual impact and that you were getting vertically into this combat space. So the double-jump, and being able to do a triple-jump, really fit well with that airborne combat, and then we wanted to get the player into this rhythm of being able to stay in the air while swinging your sword while using abilities. It’s something that takes skill; it's not that easy to do, so it's really cool to see when skilled players get their hands on the controls. 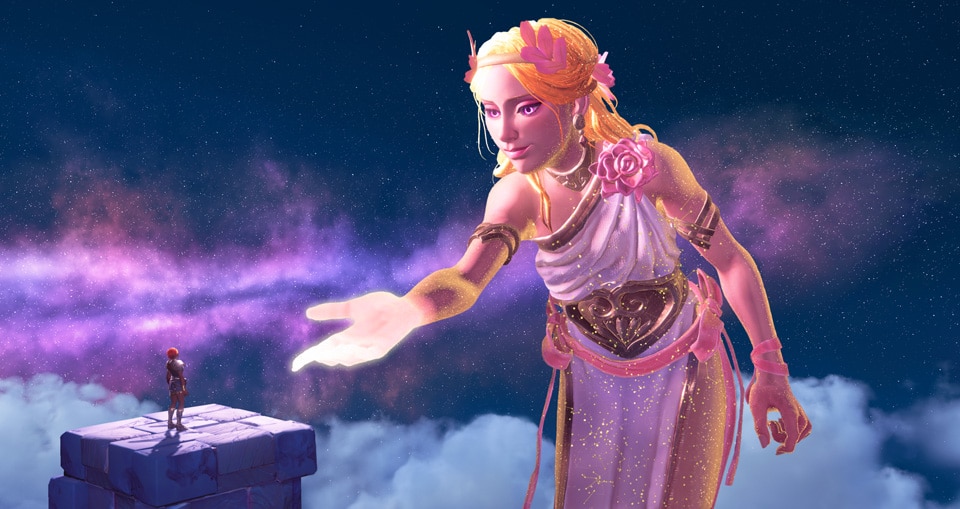 Immortals Fenyx Rising puts a big emphasis on manipulating environmental physics. How did that evolve?

SP: Just the simple idea of cutting down a tree, picking it up with the Bracers [of Herakles], and then throwing it at an enemy – that took a long, long time to get right. Physics is costly on the CPU and GPU, and when you get into having a world full of things you can pick up and destroy, and cut, and interact with, it's a different style of approaching the interactivity of the world than we typically did with Assassin's Creed Odyssey. I think what we have in Immortals Fenyx Rising is a much more dynamic and interactive world in that way, and we felt like that really gave this game’s open world something special.

When you’re fighting a cyclops, it’s able to strategically use the environment by ripping up trees, using them as clubs, and throwing objects at Fenyx. Are there other enemies that can do that? Is that something players will encounter frequently, or is it rare? 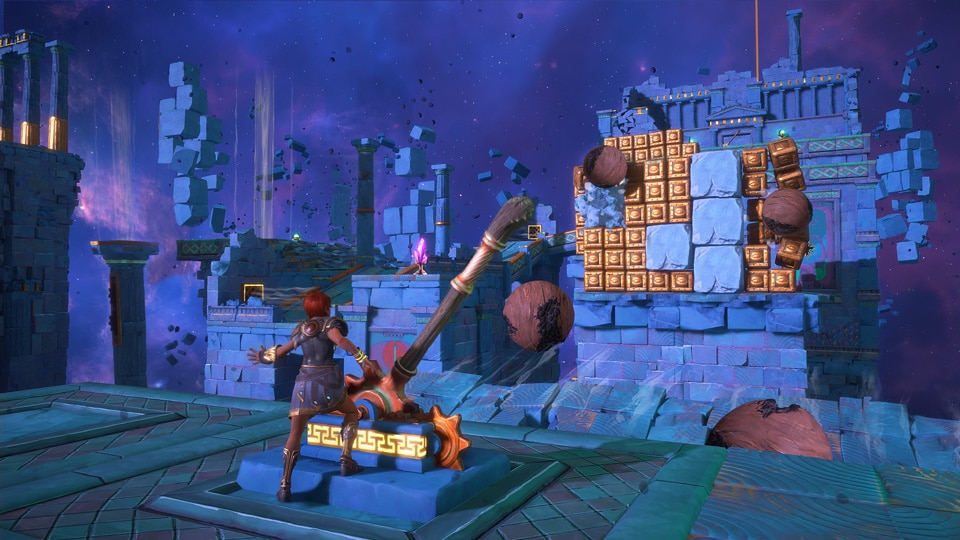 Just how open is the game’s structure? Can you make a run straight for Typhon's volcano once you’ve left the starting area, if you want to?

SP: There was definitely a period of time in the game when we did allow you to go immediately to fight Typhon, and what we found was that it worked, but it didn't allow us to tell the story that we wanted to tell with this game. We wanted to sort of build up to where you get to Typhon, where you climb Zeus’ mountain in order to then fight Typhon, and have a real payoff there. We felt that if you could just go there, it changed the way you imagine the game, and it changed the way we were able to build the narrative, and build a progressive story that had a true payoff in that later part of the game that was meaningful.

So it was something we spent time with, and honestly it was not a not an easy decision, but I think it was the right decision to be able to tell a more interesting story – which allows us to have, I think, a better player experience. We use an open quest structure to entice and guide the player towards their objectives. In addition to quests, the world is filled with content to discover and experiences that will give additional background on Greek mythology and legends, particularly about Zeus, Prometheus, and the Golden Isle and its history.

The Golden Isle is divided into different regions ruled by different gods, each with its own biome and themes. Aside from the visual differences, what does each region offer in terms of gameplay?

SP: I would say there is some specialization, but it's not something we try to super-strongly define as, “this is the only region that you do X in.” Aphrodite’s region is much more plains areas, while Ares’ region has a little bit more verticality to it. Same with Hephaistos, who also has some deep caverns, and then Athena's area is much more forested and a bit claustrophobic, in a way. Each area definitely is unique, and then probably the most tailored one is Zeus’ mountain, where there's a path we want you to follow, and so you go on what feels like a long adventure through this really dangerous location. I think that's a great sort of capstone to the game. 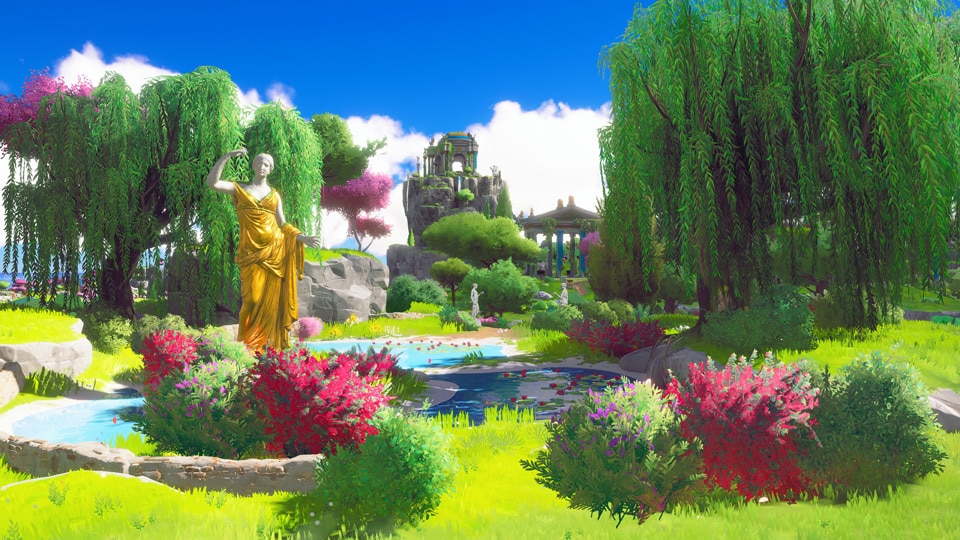 One of the funniest parts of the preview is a quest that has you rolling a pearl to recreate the conditions of Aphrodite's birth, as Zeus takes over the narration to tell a sanitized version of the myth (to Prometheus’ dismay). Was that version created from whole cloth for the game, or is it from a different telling of the myth?

SP: [laughs] I'm not sure that there's a version of the myth where Zeus is just totally unaware of how this happened or where it happened, but a lot of what we do in the game is taking the base of the mythology, understanding it really well, and then sort of putting our twist on it to modernize it, and to tell it in our tone and our style of game. So you'll always find strong elements of Greek mythology, but there's a little bit of a twist. Mythology was never a single story that was told for thousands of years; it was always changed and iterated.

Immortals Fenyx Rising launches on December 3 for Stadia, Xbox Series X | S, Xbox One, PS5, PS4, PC, and Switch, and at a later date for Amazon Luna. Click here to play the demo and pre-order Immortals Fenyx Rising. For more on the game, check out our previous coverage.