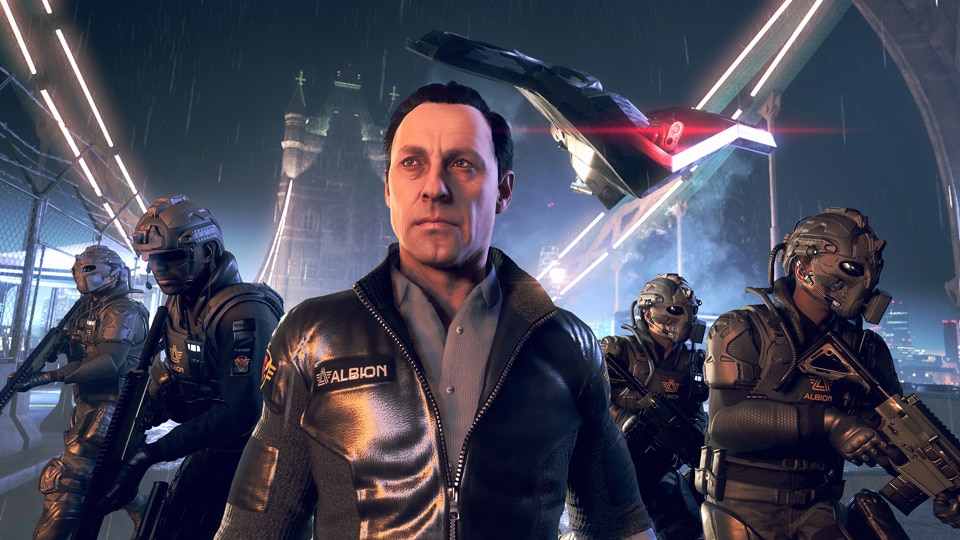 In Watch Dogs: Legion, DedSec has grown far beyond the ragtag group of vigilantes, artists, and hacktivists that starred in the first two games. In London, it’s become a full-on clandestine resistance group that draws people from all walks of life, and nowhere is that clearer than in its introductory mission, which you’ll be able to play when the game launches on October 29. Here, you’ll play as Dalton, an MI5 agent whose impeccable suit contrasts sharply with the more casual looks of Watch Dogs 2’s Marcus Holloway and Wrench. Still, Dalton is DedSec all the way, and he’s uncovered a plot to wire Parliament with several tons of explosives and pin the attack on DedSec.

Guided by Bagley – an all-seeing (and sarcastic) AI who speaks to every DedSec operative – and a handler by the name of Sabine Brandt, we take control of Dalton and sneak through the tunnels underneath the empty building, quietly taking down the masked would-be bombers with Dalton’s badass martial arts skills, silenced MP5, and his hack-filled phone, which can turn some of the more isolated explosives into proximity-activated traps. Several shootouts later, we learn that this was all a setup – Parliament may be saved, but an entity known as Zero-Day has wired several other key sites to blow at the same time, and the blame for it all falls squarely on DedSec as Dalton is cut down by drone fire and his handlers are ambushed in their underground hideout.

Well, that certainly went south in a hurry. From there, we jump to a point much further in the game during our demo, with a handful of DedSec members who we can switch between at any time. A few highlights from our roster:

Growing our resistance group is as easy as scanning people in the open world (or consulting the map to find potential skilled recruits like lawyers and paramedics). Scanning tells you important things about a prospect, like their job, applicable skills, and attitude toward DedSec. You can then add them to a list of hopefuls, and use a deep profiling tool to see the connections and potential concerns that might lead you to convince them to join up. 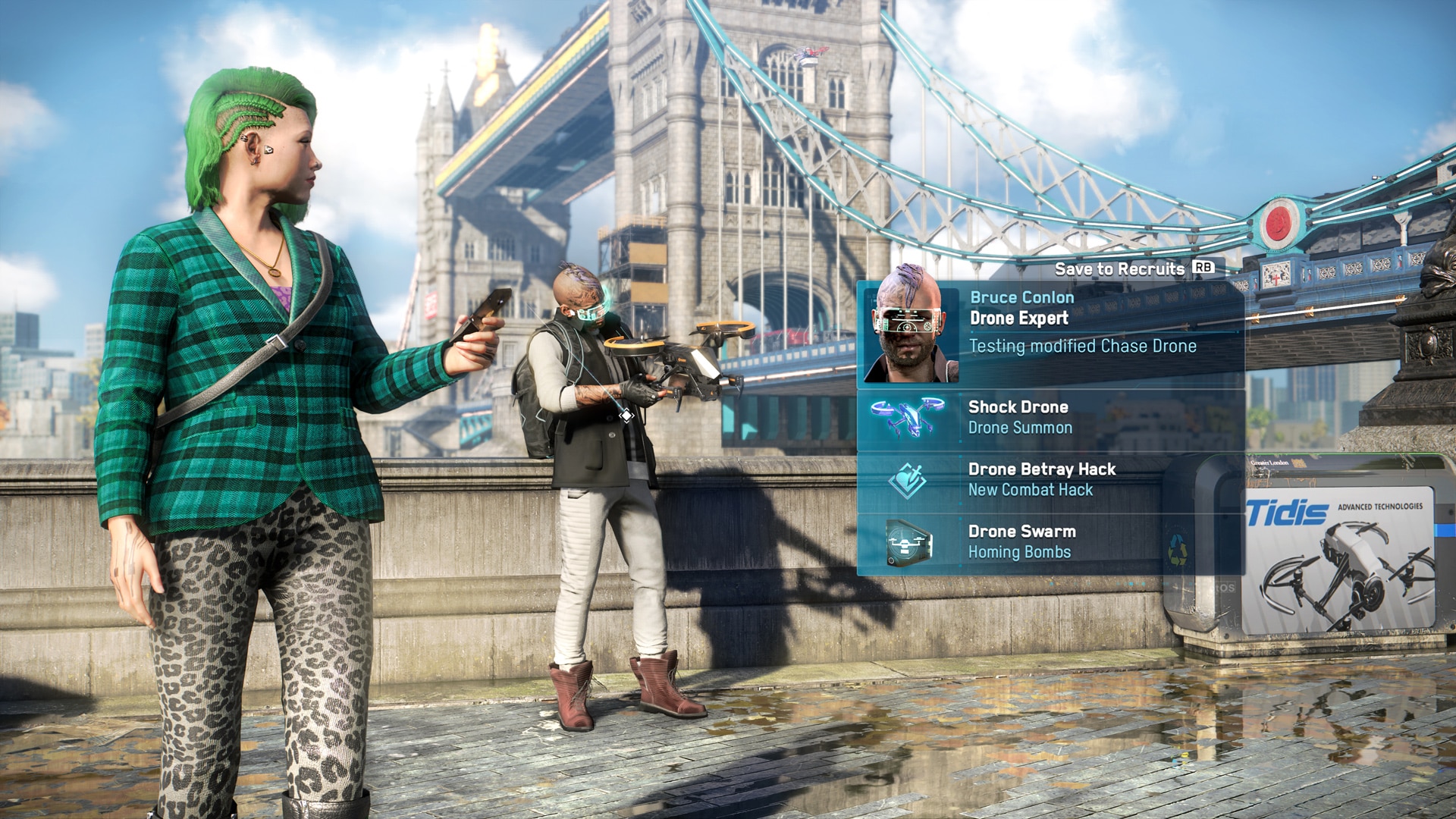 Sometimes this is as simple as destroying a crate of illicit weapons they found, but more often than not the favors are more involved, and include tasks like finding and destroying an AI that took their job, or helping a sick friend who’s at risk of falling through the cracks of the city’s healthcare system. And if someone’s predisposed to dislike DedSec – like, say, one of the guards or agents working for Albion, the corrupt private military company that’s taken over London – that’s not necessarily a deal-breaker, but it may mean you’ll have to work a little harder to win them over.

Once you’ve added a new operative to your crew, you can play as them at any time, leveraging their unique skills to find creative ways around problems and through missions. Just be aware that some may have flaws, like slow movement or a tendency to drop dead or faint unexpectedly, which might affect how they handle in the field.

From oppressor to freedom fighter

We played through two story sequences during our time with Watch Dogs: Legion; the first set us on the trail of Albion, London’s premiere authoritarian, corrupt private military corporation. An engineer named Hamish Bolaji – who was once so close to Albion’s CEO, Nigel Cass, that he was treated like a son – had recently defected from Albion and gone underground somewhere in London.

Bagley, always plugged in to London’s surveillance network, had tracked Bolaji to an apartment overlooking a marina, but we’d need to do some creative hacking to enter the place. First, we needed to make our way to a nearby rooftop hub that was connected to ctOS, the operating system behind all of London’s surveillance and networked machinery. We could do this either by hijacking a couple of hackable window-washer lifts, or flying up with a cargo drone Once we’d accessed Hamish’s security cameras, we saw that he’d rigged his security system to a shotgun pointed squarely at his front door. Trying to shut it down activated a hacking minigame, in which we scanned for a signal and then manipulated nodes to direct it through a virtual pipeline superimposed over the room. 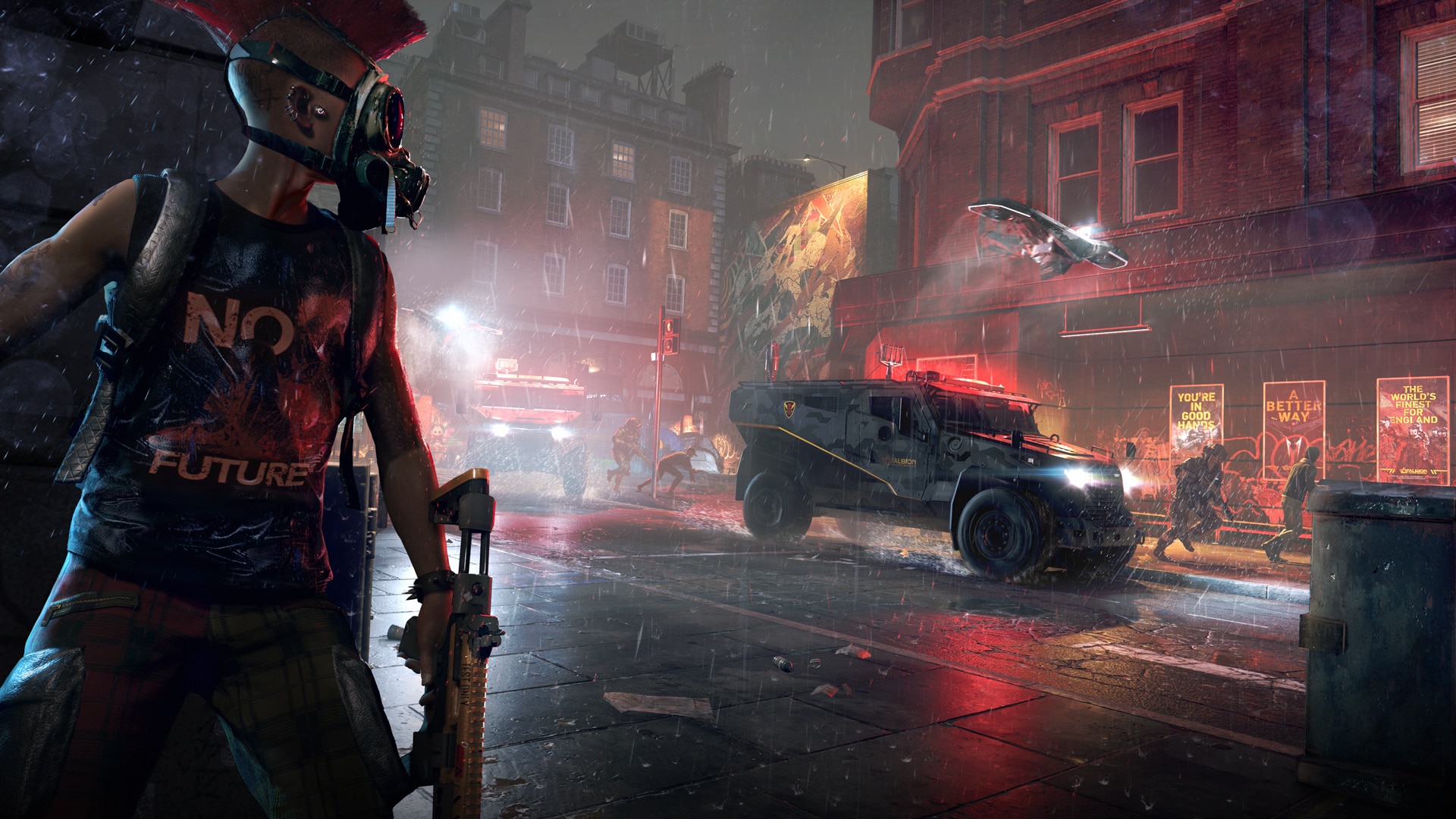 With the traps disarmed, we exited the rooftop with an Assassin’s Creed-style Leap of Faith, swam over to Hamish’s place, and walked in through the front door – and immediately triggered another trap, as Hamish appeared on a monitor to inform us we were about to be blown sky-high. Some quick talking convinced him we were DedSec, and he decided to hear us out – or he would have, if Albion guards hadn’t kicked down the door. One daring dive out a window later, and Hamish’s hideout exploded behind us, taking the guards out with it and leaving us surrounded by their comrades.

From here, we had a couple of options. We could run away, hijack one of London’s many driverless cars or cargo drones, and make a getaway. Or we could stand and fight, which – given that we didn’t have much in that moment besides a nonlethal shock pistol – turned out to not be the best idea, as our operative was gunned down almost immediately.

Watch Dogs: Legion offers players the option to play with permadeath – in which case this would’ve meant the end for that operative – or without it. We were playing without, so our operative survived and was arrested by Albion. Given that Watch Dogs: Legion gives you lots of potential operatives, this didn’t fail the mission; since the key objective had already been achieved, we were able to continue on to the next mission as a different DedSec member.

We’d learned from Hamish that Albion’s CEO was about to host an important meeting at the Tower of London, where Albion had set up an impromptu HQ. To get in, we’d need to enlist the services of a disgruntled Albion guard, who agreed to join up so long as we helped her friend, who’d been unwittingly addicted to a drug by a mob-controlled doctor. This involved stealing a whole van full of said drug from Clan Kelley, London’s top crime family, and after a little bit of sneaking, hacking, gunfighting, and reckless driving, we’d added one of the “bad guys” to our ranks. 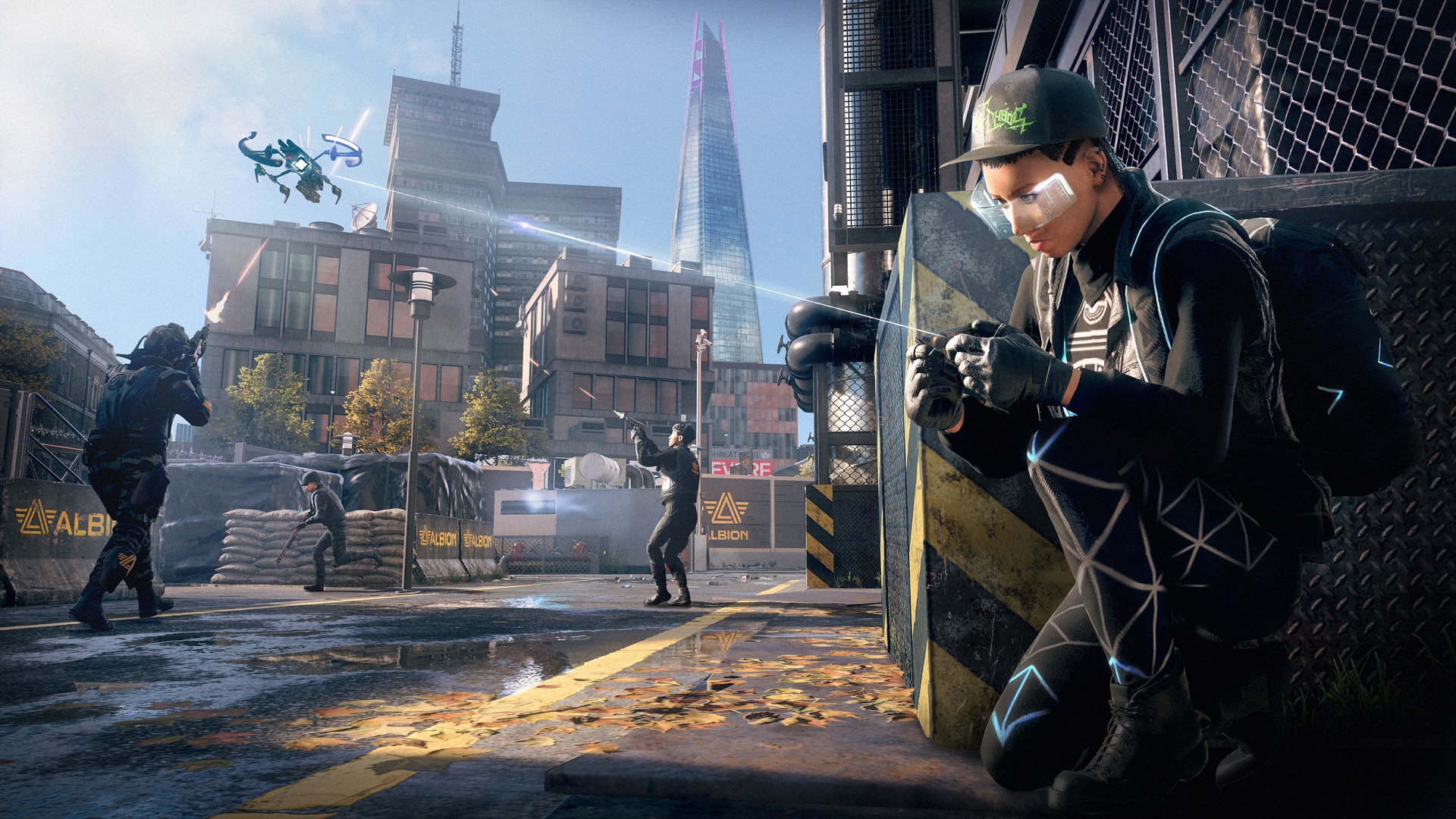 Infiltrating the tower wasn’t as easy as just walking in the front door; our guard’s colleagues had gotten wind of her defection, and while the uniform was enough to keep them convinced from a distance, getting closer would raise their suspicion. If their awareness meters filled up with red, they’d attack and sound the alarm. So to keep the suspicious at bay, we hacked their phones (the “distract” hacking option is great for pulling their attention away from us) and nearby cameras (which can make noise to attract guards) as we strolled casually up to the CEO’s meeting – and witnessed him executing a police official who questioned his plan to deploy lethal anti-crime drones across the city.

Just then, the shoddy fake pass we’d used to bypass a gate triggered an alarm, so we had to flee, something that was made a whole lot easier by a personal cloaking device that let our guard turn invisible for short bursts of time. Hoofing it down to the Tower’s basement, we squeezed inside a partially blocked tunnel, made our way to the catacombs underneath the building, and escaped the dungeon to emerge into the Thames.

The secrets of SIRS

Back on the streets, Bagley informed us that he’d intercepted a very persistent SOS from someone who wanted to get in touch with DedSec. When we showed up for a secret meeting at a café, this someone let us know – via a waitress-delivered flip phone – that he was an intelligence analyst named Richard Malik, and that he suspected some of his colleagues at England’s SIRS secret-service agency might be the masterminds behind the Zero-Day bombings. Making our way to the second meeting place, a disused lot, yielded only a splatter of blood and evidence of foul play – so once we’d accessed another nearby ctOS hub (by piloting a little spider bot through a gap in the locked shed that housed it), Bagley was able to reconstruct CCTV footage into a holographic recording of Malik’s kidnapping, complete with a fleeing van we were able to follow through the streets. 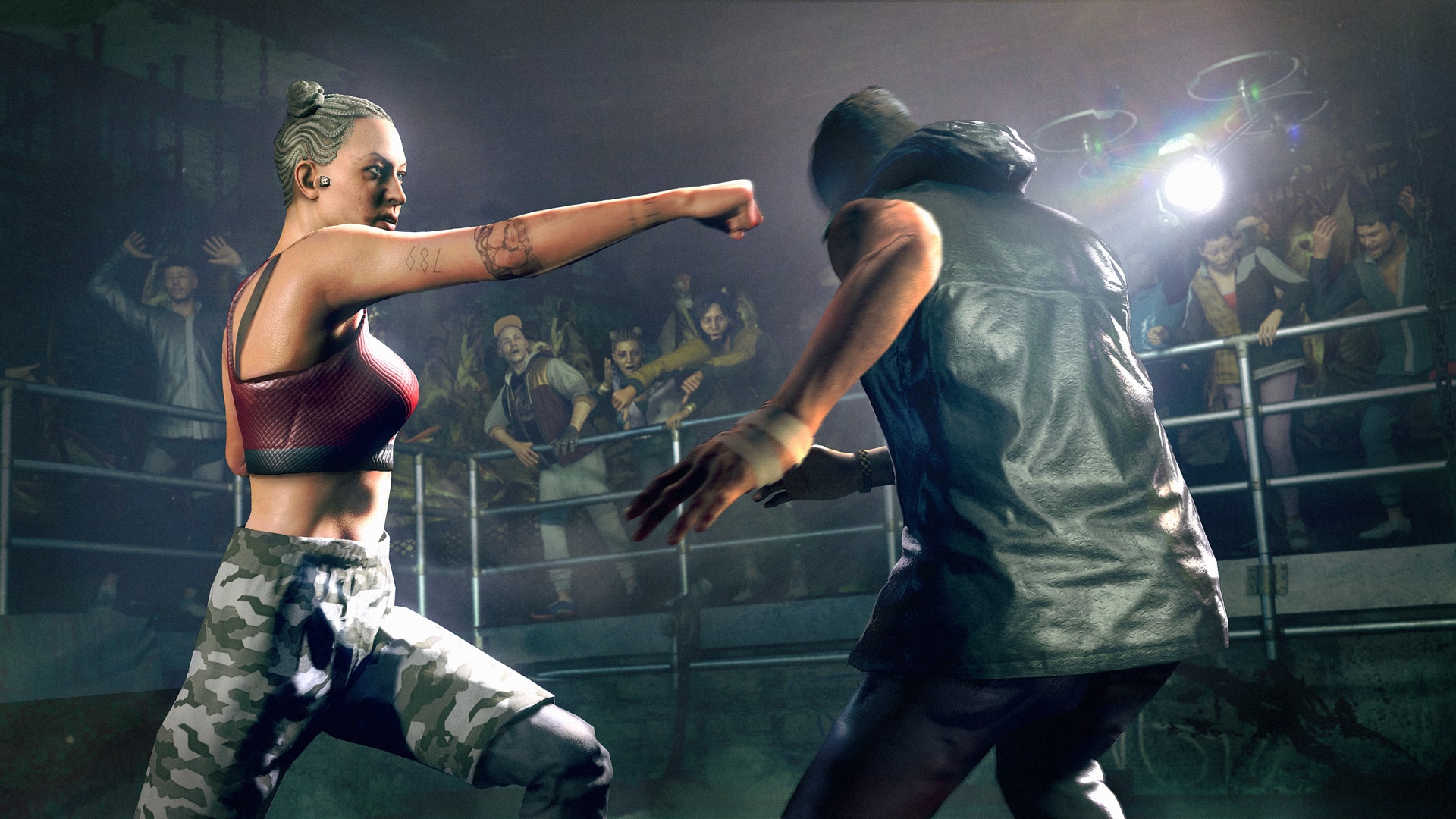 This eventually led us to a construction site crawling with guards, where we called in a cargo drone and used it to hover above the site, far above the notice of any enemies. We then hijacked a second drone, and used it to pick up explosive payloads and drop them on guards, all while keeping their attention firmly away from us. Once the herd had been thinned a little, we flew down, hacked a camera in Malik’s makeshift cell to steal the door’s lock code, and met our new friend face-to-face.

With Malik free, we escaped the yard and started on a new mission: infiltrating SIRS headquarters itself, and hacking into their servers through a service node on the roof. The clearest point of entry was a lightly patrolled parking lot in the back, from which we could shimmy up a couple of drainpipes, fight a few guards, and access the hub to take control of a spider bot deep within SIRS’ server facilities. Skittering and jumping across the casings of a massive supercomputer, we navigated the biggest environmental hacking minigame we’d encountered yet, and downloaded a list of possible Zero-Day suspects.

This concluded our time with Watch Dogs: Legion’s missions, but there’s plenty of stuff to do throughout the open world, and not all of it involves going head-to-head with DedSec’s worst enemies. There are Borough Uprisings that let you take back neighborhoods through sequences of unique side missions (like infiltrating a transport-agency building to remotely hack an auto-piloted plane illegally transporting political prisoners, and divert it back to London); discoverable side activities including underground fighting rings; and no shortage of automated cars and drones you can use to create all sorts of street-level mayhem (particularly if you forget which side of the street to drive on). 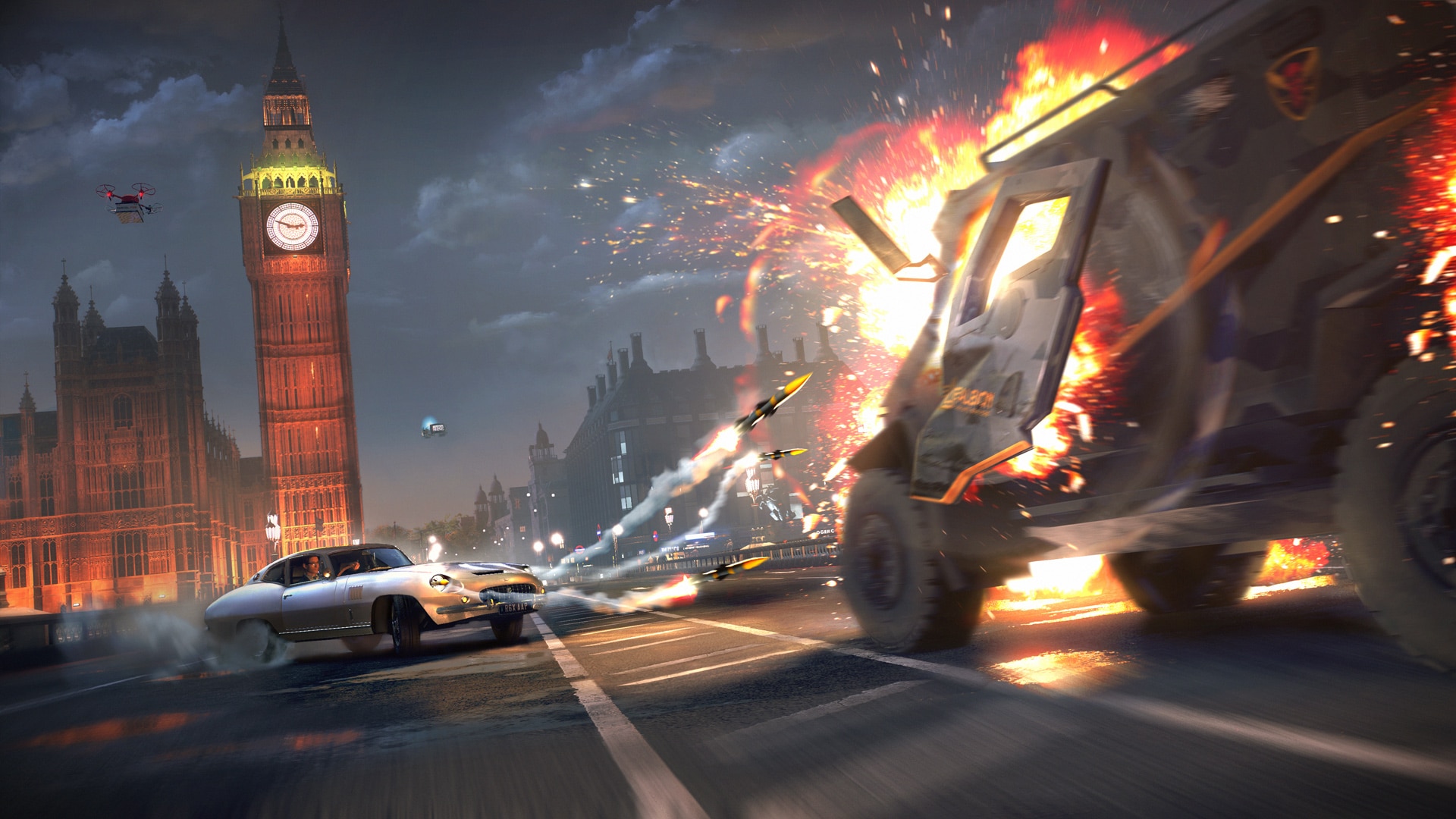 Watch Dogs: Legion is coming on October 29 for Xbox One, PS4, PC (including UPLAY+), and Stadia, and purchasing the Xbox One or PS4 versions will unlock automatic access to the Xbox Series X and PlayStation 5 versions (respectively), enabling players to continue the experience while taking advantage of ray-tracing, haptic controls (on PS5), and other next-gen features. For more on Watch Dogs: Legion, check out our ongoing coverage.