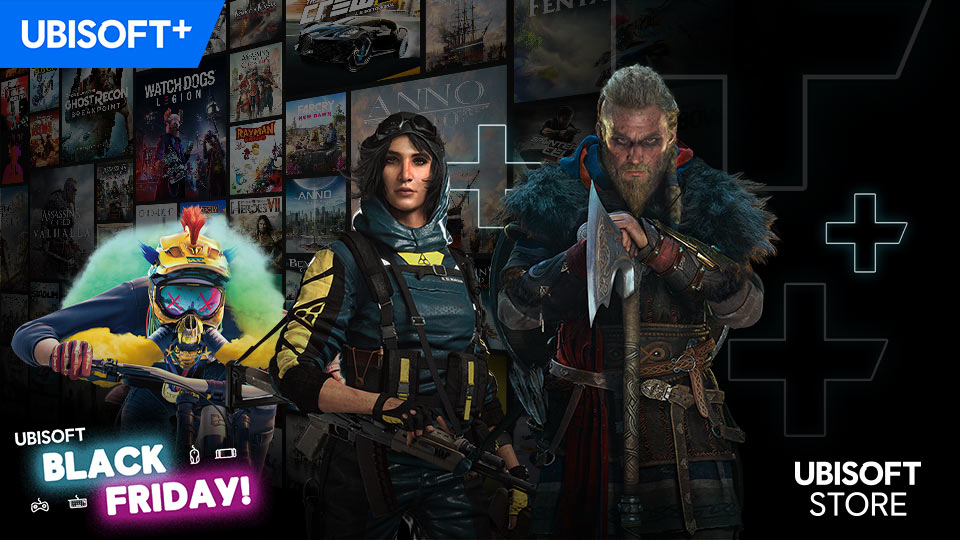 Ubisoft+ is a monthly subscription service that grants access to over 100 Ubisoft titles and DLCs (including day-one access for new releases), monthly rewards, discounts, and more – and now is your chance to take advantage of an exclusive Black Friday offer where you can save 50% off your first month until November 30th. At the end of your first month, you can choose to purchase the PC Access Ubisoft+ subscription for $14.99 per month or the Multi Access plan (granting access to play on Amazon Luna as well as PC) for $17.99 per month. Here’s how signing up for Ubisoft+ will change the way you game:

The size of the Ubisoft+ library cannot be overstated; with over 100 games, DLCs, and third-party indie titles, there’s a game for every occasion. Feel like taking part in a guerilla rebellion on a tropical island? Far Cry 6’s Libertad is ready to welcome you into their ranks. Want to show off your tactical FPS skills? Rainbow Six Siege has an Operator waiting to take you into the firefight. Maybe you want to test your mettle as a god from Norse mythology – Assassin’s Creed Valhalla Dawn of Ragnarök has you covered. For chill days, Lake (by Gamious Studios) lets you deliver mail in its hero’s little hometown. Not only do you get access to all these titles and more, you can play them at no cost whatsoever beyond the Ubisoft+ subscription fee.

You can also earn rewards through your Ubisoft+ subscription! Here’s how it works: Each month, new in-game rewards will drop, ranging from skins to boosters to resources. The number of rewards you get depends on your ranking, which is determined by how long you’ve had your Ubisoft+ subscription. When you first sign up, you’re in the bronze tier, earning one reward per month. In your second month, you rise to the silver tier, earning two rewards. You’ll get three rewards per month when you’ve hit gold status, which is achieved by having the subscription for four months. Finally, having Ubisoft+ for seven months will get you to the platinum tier, earning four in-game rewards every month. Typically, these rewards are earned through gameplay progression or by in-store purchases, so getting them just for having a Ubisoft+ subscription can save you time and money.

Speaking of in-game purchases, Ubisoft+ also offers 10% off in-game currency purchases. For Ubisoft games that have in-game currency, you can purchase unique skins, unlock weapons, and access seasonal battle passes. As long as your Ubisoft+ subscription is active on your Ubisoft account, the discount will automatically be applied when you make the purchase from the dedicated in-game store.

Don’t miss out on your opportunity to save 50% off your first month of Ubisoft+. Remember, the offer ends November 30th for new and lapsed players. For more about Ubisoft+, learn about the recent addition of indie games to the platform, or stay tuned to Ubisoft’s dedicated news hub.