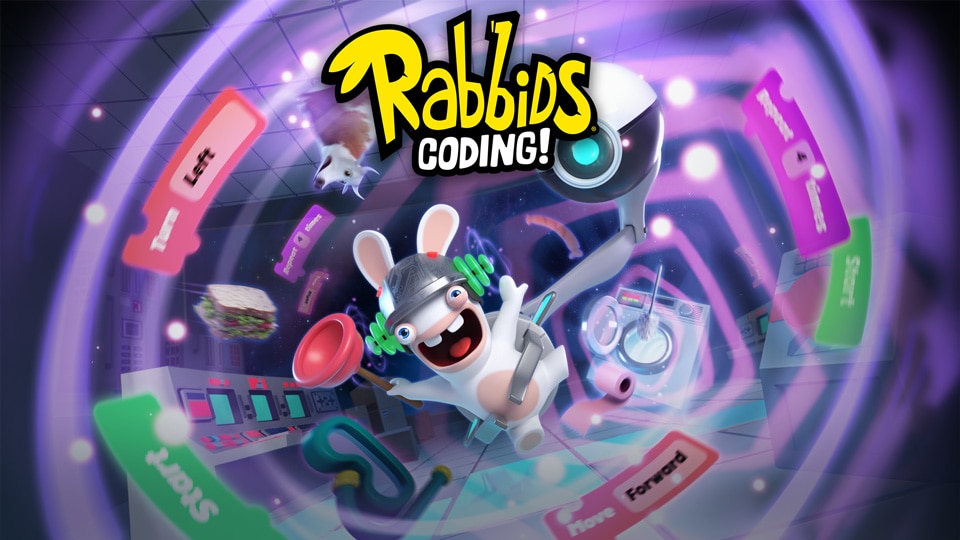 Rabbids Coding is a free, educational game published by Ubisoft with which players can learn basic coding skills while cleaning up a Rabbids-style mess in space. The game doesn’t require any previous coding experience, and it has an easy-to-understand visual display. By simply dragging and dropping blocks of code, the player manages the actions of a Rabbid wearing a mind control device. The goal in each level is to provide the simplest possible instructions for the Rabbid to complete their assigned task. The team behind the game recently held a level design competition for students and have added the winning levels to the game with today’s update, along with five new languages to allow even more people to learn the fundamentals of programming.

The educational aspect of Rabbids Coding makes it a perfect platform for students to learn and expand upon their coding skills, a concept which led Ubisoft to initiate the worldwide level design competition in partnership with Bibliothèque Sans Frontières. The competition was open to students from around the world, drawing over 300 participants and bringing to life 70 different level designs. The eight competition winners, who represent nine universities and five countries, have since had their levels added to the game. “At Ubisoft, we believe that games are an ideal playground for children to learn and grow,” said Mickaël Newton, project manager, Corporate Social Responsibility. “By inviting students to develop new levels for Rabbids Coding, we hoped to not only continue our mission to bring accessible coding lessons to kids around the world, but also to inspire the next generation of video game developers to put their skills to use for a positive initiative.”

Students’ backgrounds were a diverse mix, with some students enrolled in degree programs specifically related to coding, while others entered without much experience but a passion for games. One winning participant, Michelle Liu, chose a university program in animation at NTU’s School of Art, Design and Media in Singapore. Though her team would ultimately be announced as winners, designing level 35 of the game, she wasn’t so sure of her chances in the beginning. “At first, I didn’t think I had what it takes to participate,” said Liu, “as I had little confidence in my coding skills.” However, with the encouragement of her boyfriend, she decided to team up with some of her more experienced friends, while at the same time contributing her own expertise and learning along the way. Another winner, Mattia Beffa, is a former programmer, IT technician, and current game design student at the Italian Academy of Video Games. According to Mattia, he has wanted to work in the video game industry since playing his father’s PlayStation 2 when he was younger. For Mattia and his team, the challenge was to create a level which “reflected the vibe of Raving Rabbids; something different, confusing at first, but clear once you’re in it, and above all a little crazy.” After working on several different drafts of their level, Mattia and his team still felt something was missing. “We thought it was good, but we were missing the casual and fun dimension of the Rabbids. So, we turned the maze into a club, with colorful tiles and Rabbids running around the path.” Finally, they felt they had succeeded.

Teams from all around the world entered the competition, and choosing the winners was tough, but from today you can try out all of their levels in the game. Check out the full list of competition winners and try out their levels now:

In addition to adding the winning level designs, Rabbids Coding can now be played in five new languages including: Arabic, Catalan, Japanese, Portuguese, and Spanish. For the latest news on all Ubisoft games, keep your eyes on the Ubisoft News Hub, and check out Rabbids Coding for free on PC through Ubisoft Connect or through your mobile’s app store.