Assassin’s Creed Valhalla takes place toward the end of the ninth century, a time when Norse tribes were leaving their homes in Scandinavia and sailing to the collection of fractured kingdoms known as England. It’s here, during this age of transition, that you’ll take on the role of Eivor and lead your people to a new land in the search for a new home. As you embark on Valhalla’s epic Viking journey, you’ll lead deadly raiding parties, fight in massive battles, and build up a prosperous settlement, all within the historical backdrop of ninth century England.

To learn more about this period of time so commonly referred to as the Dark Ages, we spoke with Thierry Noel, historian and inspirational content advisor on Assassin’s Creed Valhalla.

When we use the word “Vikings,” who are the exact people we’re referring to?

Thierry Noel: That’s an excellent question. When we say “Vikings” it’s kind of used as a generic word. We know that in the West, it conjures up the image of brutes and plunderers that destroyed monasteries all over Western Europe, but in reality, it’s a bit more complicated than that. The term “Vikings” actually refers to an elite class of the Norse society. They were a certain group of people in Norse culture that were traders, explorers, excellent seafarers, settlers, and, yes, sometimes invaders and plunderers.

The game begins with Eivor’s clan leaving their home in Norway. Why are they leaving? What’s happening in that part of the world at this time?

TN: Historically speaking, it’s still highly debated. We’re talking endless wars and conflict and a lack of resources and land. The answer is probably a mix of all of that. They left because they wanted to discover a new land and find resources. In the ninth century, the people of Scandinavia had recently discovered the use of sails and absolutely mastered them. This helped them travel all over the world. At the end of the Roman period, the world was fragmented, and the Vikings played a very important role in reconnecting it, because they went nearly everywhere.

TN: It’s a fascinating time. It’s been called the Dark Ages because we don’t have as much information relative to certain time periods like Ancient Egypt or Greece. It may be dark, but it’s also a period of transition and transformation. The Roman world has disappeared, and the medieval era has not yet totally arrived. It’s a really interesting period of rebuilding the western world, rebuilding values, rebuilding states and nations, and mixing cultures that were isolated before. It’s not only a period of conflict; it’s a period of intensive cultural exchange between people, and Vikings played an essential role in that rebuilding of the world through exchanges. 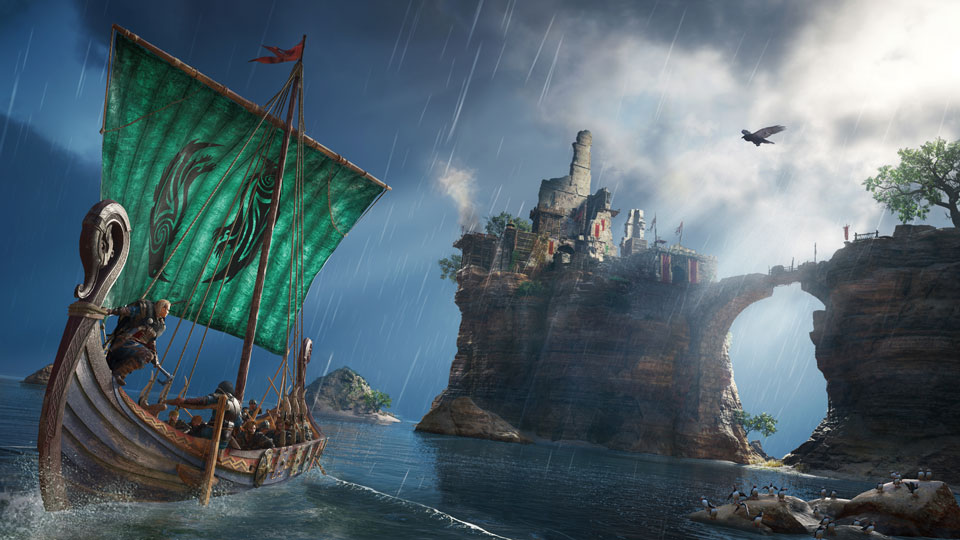 What kind of world is Eivor traveling to? What’s the state of England in the ninth century?

TN: At that time, England was a multiethnic society. It was dominated by the Anglo-Saxons, but there were also Britons, descendants of Ancient Rome, and many others. It was a wealthy land, but it was a divided land, especially between rival Anglo-Saxon kingdoms. This was all very appealing for the Vikings, who took advantage of the situation of a divided England.

We see the king of one of those Kingdoms, Aelfred, in the new trailer. Who exactly is King Aelfred?

TN: King Aelfred is a very important character in England’s history. When the Vikings started to invade and settle England, all the Anglo-Saxon kingdoms fell, one after another. The only one that survived was Wessex, which was the kingdom ruled by Aelfred. It not only survived, but he managed to repel the Viking invasion, and even managed to rebuild modern England. He’s a very important character for us.

TN: We know that combat at the time was rough and rustic. It was really harsh; our research taught us that Vikings were very versatile fighters. They knew how to use a wide variety of weapons; and managed to dual-wield any kind of weapons they could get their hands on. They even weaponized their shields, which is why you can dual-wield them in Assassin’s Creed Valhalla. There was so much variety in Viking combat, and that’s what we wanted to make available to the player as well. Research also taught us that Vikings had many different battle tactics, and that’s where the raids come from. We wanted to make sure to reflect those raids and let players control them. 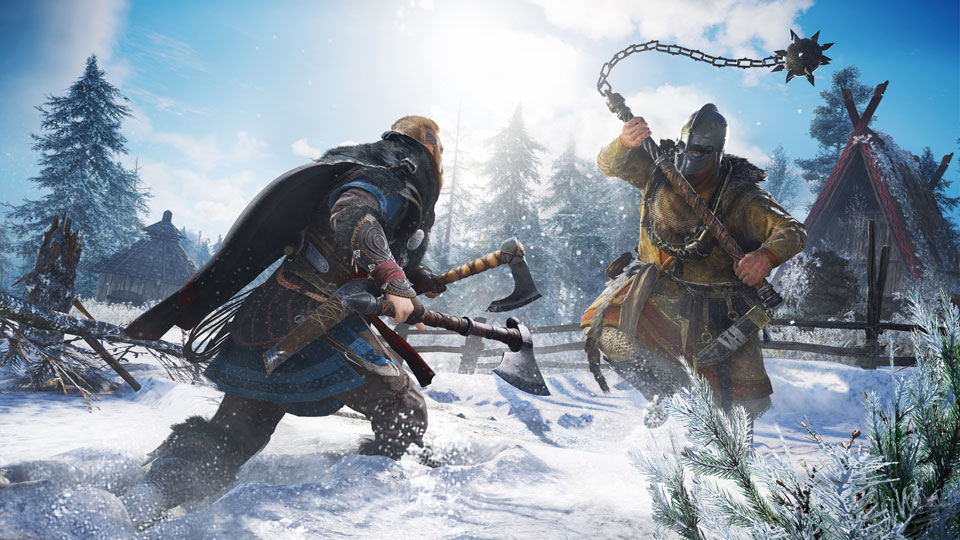 The trailer shows Viking rituals, and includes direct references to their gods. How will that play out in the game?

TN: The gods and myths played a very important role in the daily life of Norse people, through ceremonies, rituals, beliefs, and interpretations of the world around them. They had superstitions and believed in signs, like the appearance of a raven that we see in the trailer. We see the influence even in popular stories and famous Viking sagas. Viking society, ritual, and mythology is a fundamental part of the world of Assassin’s Creed Valhalla.

One of the things you’ll do when arriving in England is build a settlement for your people. How did history inform this idea?

TN: Settlements were so important for Viking society. Not only were they traders and explorers, but they started to settle everywhere they could. We have archaeological information about Viking settlements in England; through that data, we know that settlements were the basis of their community and foundation for their livelihood.

You mentioned that these are referred to the Dark Ages because we don’t have much information relative to other periods. Where does our information come from?

TN: Part of it is archaeological. The other part is from historical sources from that time, from all kinds of chronicles and texts. Unfortunately, Vikings left behind very few texts talking about themselves, so that’s why the negative image we have of Vikings was based on the texts of monks and sometimes from victims of Viking invasions; as you can imagine, they had quite a negative perception. We also had the Viking sagas and myths, which were passed down through oral traditions for centuries and eventually written down to help inform the world.

In later centuries, when countries like England examined their own history, it was important for them to imagine a brutal enemy to help explain why England was a nation broken apart at that time. 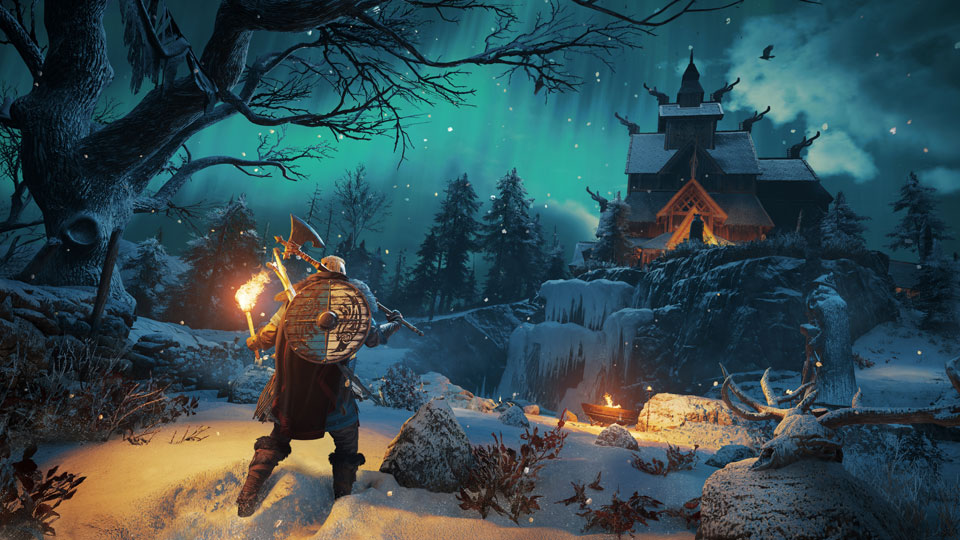 Did anything in your research surprise you?

TN: Oh, totally. The gap between the reality of Norse society and the image we have of the reckless Viking was really interesting to me. They were a very fair society in terms of taxes and how they treated women, who had important rights at the time. It was certainly contradictory to the common image we have of Vikings.

Players can choose to play Eivor as either a man or a woman, and we even see women fighting in the trailer. Were women warriors in Viking culture?

TN: The archaeological sources are highly debated on that specific issue. But the fact is, and I think what’s really important, is that it was part of their conception of the world. Sagas and myths from Norse society are full of tough female characters and warriors. It was part of their idea of the world, that women and men are equally formidable in battle, and that’s something that Assassin’s Creed Valhalla will reflect.