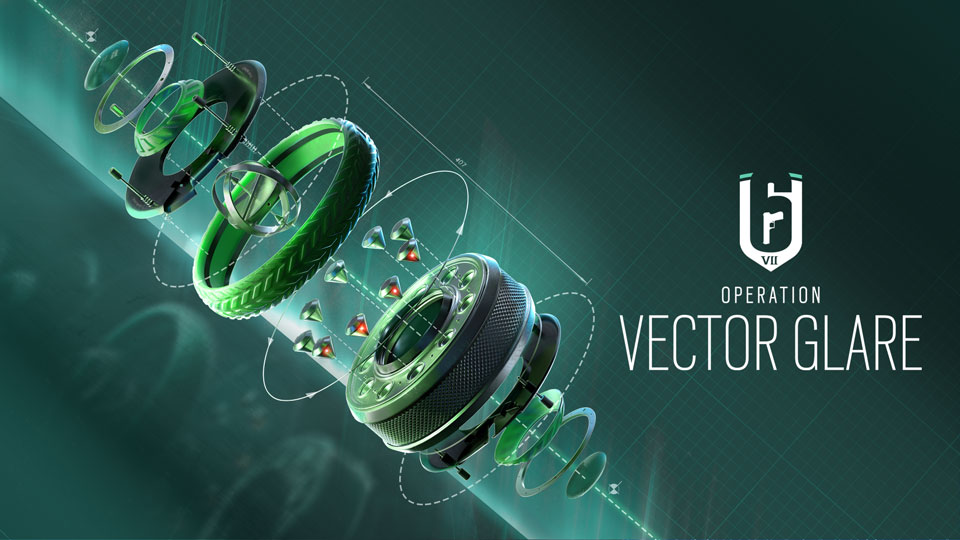 Operation Vector Glare is launching on June 7, bringing the second season of Year 7 to Rainbow Six Siege. It will introduce Sens, a new attacking Operator from Belgium who uses their R.O.U. Projector System gadget to create opaque light walls that block the Defenders’ vision and unlock new tactical opportunities for the Attackers. Sens also brings a new weapon – the high-capacity POF-9 assault rifle – and will be available at launch as part of the Vector Glare Battle Pass, then unlockable two weeks after launch with Renown or R6 Credits. Read on for a breakdown of Sens’ gadget and updates coming with the new season, as well as details on the Squad Up Reactivation program, which allows you to earn free Operators by bringing your former squadmates back into the game.

A bevy of free updates for all players is coming with Operation Vector Glare, including a new shooting range designed to give you a space to practice with the weapons of Siege; you can enter the range as any Operator, even ones you have not unlocked. A new Team Deathmatch map is also inbound; titled Close Quarters, it’s the first map purpose-built for TDM, which means fast-paced action and no areas designed for defensive setups. Vector Glare is also kicking off the first implementation phase of the reputation system which will target players who repeatedly and intentionally incur the friendly fire penalty. And a few Operators will be receiving a third secondary weapon option, particularly those Operators who had an option removed with the addition of the explosive Gonne-6.

The Squad Up Reactivation program is aimed at getting players back into Siege and rewarding the players who bring them back. If you have played Siege in Year 7, then all you need to do is find a friend who hasn’t played in Year 7, squad up, and play five matches of any PVP mode with them. You can do this with up to four players, and you’ll earn a reward for each one. You can unlock three Operators from Year 6 (or equivalent rewards if you have them already) and an exotic weapon skin for the R4C assault rifle.

The returning players will benefit as well. After they play their five matches with you, they’ll be granted a Year 4 or 5 Operator. Then, they’ll be eligible to recruit another four players to come back in, and to earn the rewards mentioned in the previous paragraph. 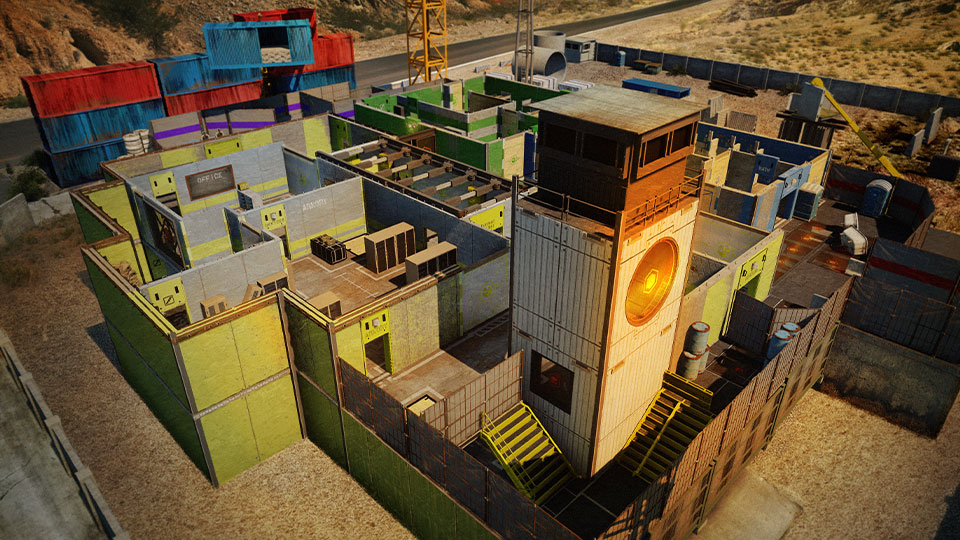 Sens and the R.O.U. Projector System

Speaking of Operators, the new one coming in Operation Vector Glare is Sens, a three-health, one-speed Attacker who brings significant firepower and utility to bear on the battlefield. In their primary weapon slot, they have either the 417 marksman rifle or the new POF-9 assault rifle, complete with a high-capacity magazine. Their secondary options include the SDP 9MM pistol or the Gonne-6, and for gadgets, a hard breach charge or a claymore.

Sens’ unique gadget is the R.O.U. Projector System. This device looks like a wheel about the circumference of a dinner plate. When Sens throws the wheel out, it’ll start rolling as soon as it hits the ground, moving in a straight path. If it hits a surface, it will ricochet and keep rolling, and eventually, it will run out of juice and self-destruct. All along the path, the R.O.U. drops small projectors that create walls of bright blue-green light that are taller than an Operator and completely opaque. These walls link together along the path that the R.O.U. follows, allowing Sens to create lengthy visual obstructions. Note that the obstruction is only visual; you can easily walk, shoot, or throw gadgets through them. But in a game in which lines of sight are so powerful, Sens is an impressive force for disruption.

The R.O.U. allows Sens to mask the Attackers activities, perhaps setting them up for entry into an objective room, a cheeky defuser plant, or a heroic teammate revival. Their gadget also pairs very well with Glaz, as his HDS Flip Sight can see through the wall and target any Defenders on the other side. Even if you’re not actively obscuring your movements, deploying an R.O.U. to simply distract Defenders can be a powerful tactic, as they can’t easily ignore a place their foes might be hiding. 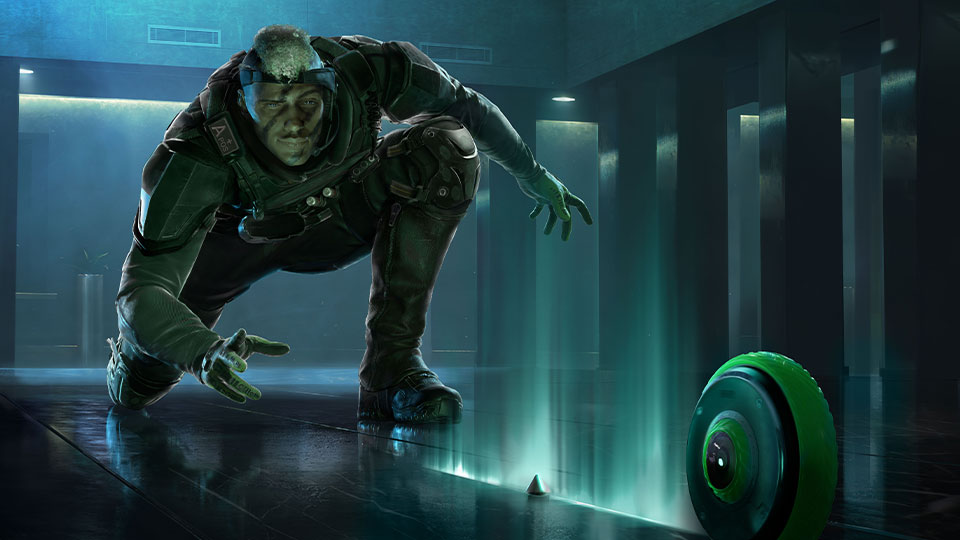 This is where the Defenders might want to bring Warden along. His Glance Smart Glasses can see through the R.O.U. walls, making him a hard counter for Sens. Other Defenders who can help mitigate Sens’ meddling are Jäger, whose Active Defense System will destroy the wheel and prevent it from dropping more projectors, and Wamai, whose Mag-NET gadget will catch the wheel, then release it on an unpredictable new trajectory. Aruni’s Surya gates will destroy the wheel, unless it scoots by underneath, and while Mute’s jammers won’t stop the wheel, they will disable any projectors that the wheel drops within their range.

Bulletproof cameras can similarly disable the projectors with their EMP burst, and they can also be used to look through the walls and spy on what the Attackers are up to. Maestro’s Evil Eyes can also see through the walls, but their lasers cannot destroy the projectors. Nor can bullets; to clear out Sens’ projectors, you’ll want explosives; a quick impact grenade does the trick nicely.

Sens’ gadget is deeply entwined with the strategic interplay of loadouts and gadgets that happens around a Siege objective, and there are even more potential interactions to consider. For example, barbed wire slows the R.O.U. down, shortening the distance it can cover, and a well-placed proximity alarm can help a Defender monitor an entryway even if an R.O.U. wall is obscuring it from sight. Sens introduces a new strategic catalyst to Siege and, with their hard-hitting loadout, is sure to be one to watch.

Operation Vector Glare hits the Test Server on PC on May 24, with the full season launch slated for June 7. Rainbow Six Siege is available now on PC from the Ubisoft Store and through a Ubisoft+ subscription; it’s also out on PS5, PS4, Xbox Series X|S, Xbox One, and Stadia. Catch up on the current season with our Demon Veil Operator and Gadget Guide and be sure to read our interview with the Creative Director of Rainbow Six Mobile.