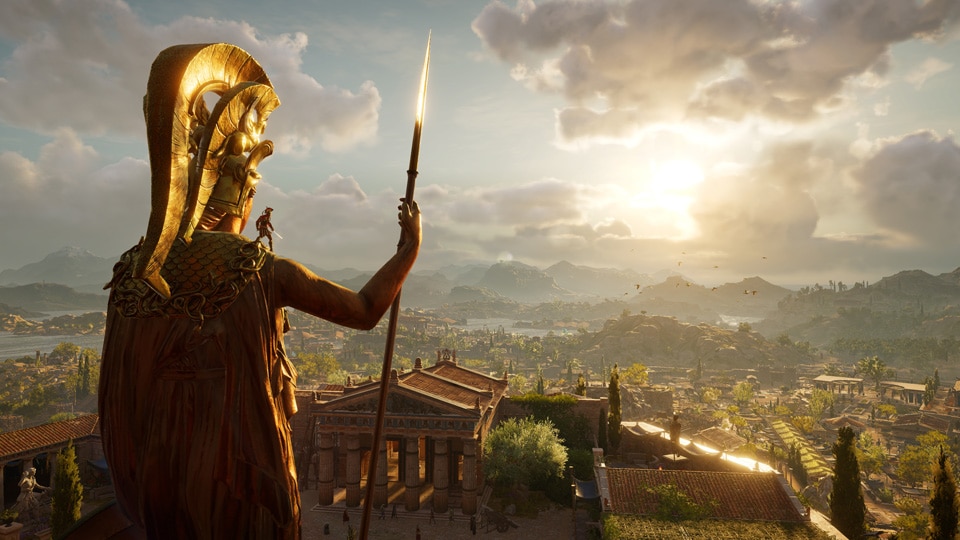 What Could an Assassin’s Creed Theme Park Ride Look Like?

In Assassin’s Creed IV: Black Flag’s modern-day setting, you play as a member of Abstergo Entertainment, a division of the neo-Templar organization responsible for turning animus experiences into consumer entertainment. While we may never have devices that allow us to experience the genetic memories of 18th-century Caribbean pirates, that doesn’t stop us from wondering what an Assassin’s Creed theme park attraction could look like. That was exactly the topic of a recent Game Developers Conference 2021 Game Narrative Summit, titled Storytelling Siblings: The Kindred Connection Between Games and Theme Parks. The summit was led by The Bezark Company, who has specialized in designing attractions, entertainment, and events for more than 20 years. They were joined by Ubisoft’s Location-Based Entertainment Manager Mathilde Bresson to imagine an Assassin’s Creed theme park attraction.

The Bezark team was composed of President Adam Bezark, Lead Creative Director Michael Balzer, Creative Technologist/Producer Vaughn Hannon, and Creative Coordinator Lex Rhodes. Right off the bat, the experienced team made it clear what the challenges would be for adapting Assassin’s Creed to a theme park ride: how do you facilitate agency and individualization? It’s a question that all theme park designers must consider, one that presents challenges and opportunities. Rollercoasters can be incredibly thrilling, but once a visitor takes a seat and straps in, the experience is nearly universal for all riders. It was quickly decided that a hypothetical Assassin’s Creed attraction would need to embrace agency and individualization. 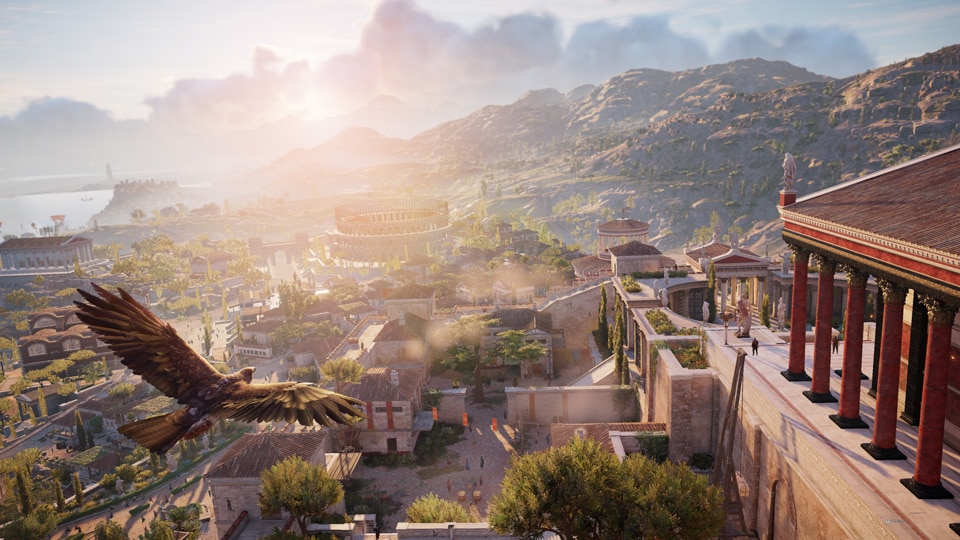 The challenge of agency is doubled when adapting a videogame, Rhodes was quick to point out. Video games are already interactive, and satisfy the promise of choice; when adapting it to an attraction, the last thing you want is to have it fall short of an experience you can have at home. So, what experiences can players not have at home? What experiences are core to the Assassin’s Creed franchise? What would a visitor’s expectation be for an Assassin’s Creed ride? The team identified two main aspects that the attraction should offer visitors that can’t be experienced at home and are essential to the Assassin’s Creed experience: parkour and the leap of faith.

To conceptualize this, the team took reference from Shanghai Disneyland’s Challenge Trails. This attraction places guests in a secure harness connected to a rope, which travels along rails and challenges them to move through various obstacles, like crossing a precarious bridge over a large gap, or navigating a small ledge on the edge of a cliffside. The trail is designed to be safe and ensure success, while not faking the challenge of scaling the obstacles it presents. Additionally, guests can move their harnesses along rails and at multiple checkpoints, and can choose to travel down a hard, medium, or easy difficulty track.

An Assassin’s Creed theme park ride would be less of a ride and more of a physical immersive experience, the team reasoned. Guests would have complete freedom of movement and the individualization to overcome the parkour challenge however they wanted, as well as the agency to decide their route with varying difficulty. Perhaps a difficult route navigates the balconies and clotheslines of an urban environment, while a medium route takes to the rooftops, and an easy track sees guests hiding in plain sight at street level. Not only is it accommodating to people of different physical abilities, it adds a non-linear, variable approach that encourages multiple visits.

While Assassin’s Creed games largely take place outdoors, there’s always the possibility of ushering guests into indoor areas to present special effects and projections to add in a storytelling element as well. Perhaps Ezio or Evie is helping you chase down an escaping Templar? Maybe Juno presents herself to you through a Piece of Eden? Thanks to modern technology, theme parks can create incredibly realistic projections for audiences that boost the theatricality of any attraction. 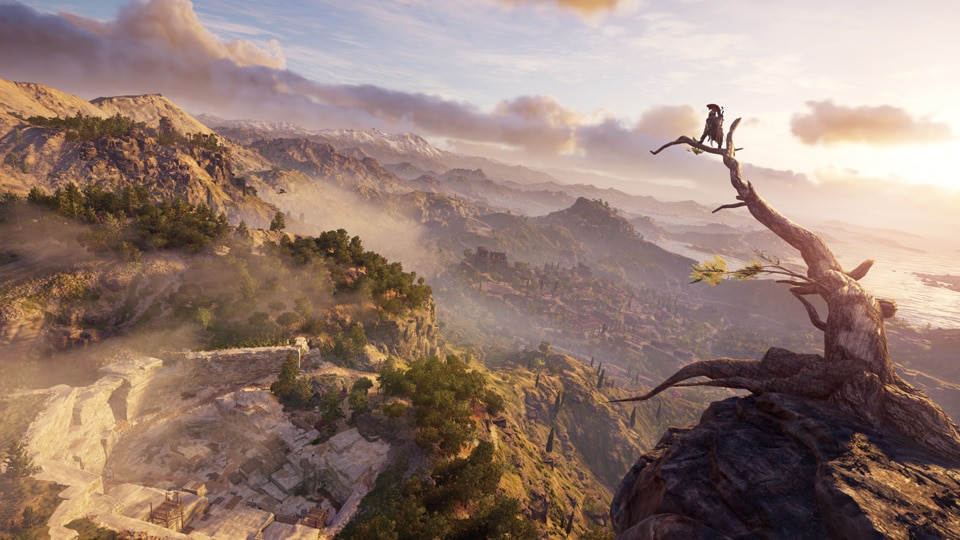 One of the most important considerations for attraction designers after making sure something is fun to participate in, is making sure it’s also fun to watch. Guests walking past an attraction or waiting in line need to be entertained and enticed into trying it themselves. Think about the final drop on Splash Mountain at Disneyland. Leaping from rooftop to rooftop and climbing towers can certainly be entertaining to watch, but what about the ride’s climax? The team still needed to work in the leap of faith as a finale, but do it in a manner that would provide the most thrills.

Balzer highlighted that at times, Assassin’s Creed is about slow, methodical movement followed by incredible speed and swiftness. What if the team could take the harnesses into a motorized track to propel visitors on a zipline to a tower’s peak? The rush of a speedy ascent could serve nicely as the penultimate thrill of the attraction, before the final plummet into a conveniently placed bale of hay (or much more likely a net, in this case).

If the attraction was going to mimic a true Assassin’s Creed experience, the leap of faith couldn’t be rushed. As fans of the series know, leaps of faith are proceeded by a synchronization, in which the Assassin surveys the land and is treated to a breathtaking vista. Since visitors would at this point be on a motorized track, the intense speed of the ascent could be interrupted by a moment of pause and calm in which the full theme park and city below would be in sight, just before the climactic moment of leaping off the tower and landing safely on the ground.

The team at Bezark was clear that, in a brainstorm like this, there’s no wrong answers. Could there be an Assassin’s Creed rollercoaster? Absolutely. An Assassin’s Creed ride-along ride? Sure! The team utilized their expertise to imagine just one possible iteration of an Assassin’s Creed-themed attraction, but the possibilities are limited only by our imagination.

For more on Assassin’s Creed, be sure to visit the game’s dedicated news hub, and for all the news from GDC 2021, visit Inside Ubisoft.