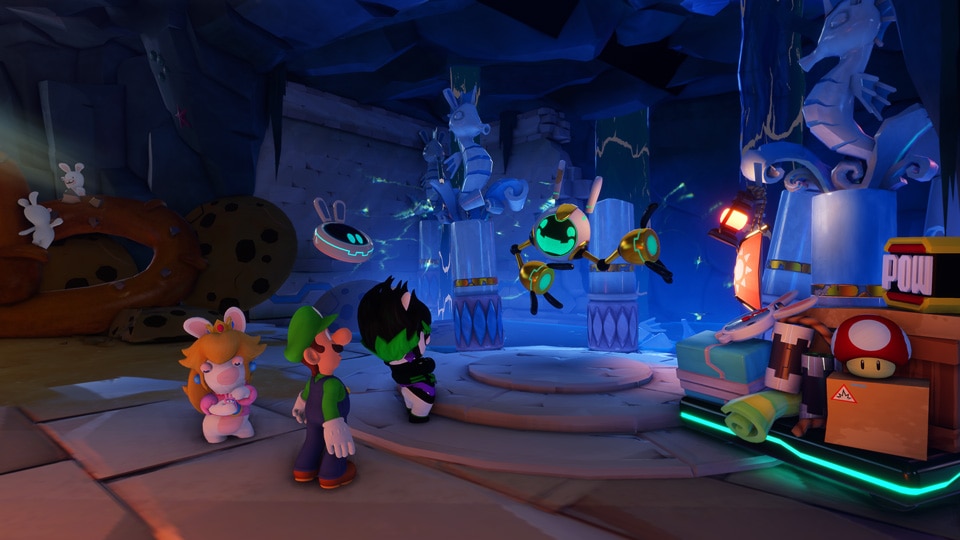 Mario + Rabbids Sparks of Hope reunites the Mushroom Kingdom crew with their Rabbid counterparts for a new adventure that pushes far beyond the bounds of Mario + Rabbids Kingdom Battle in just about every way imaginable. The new game catapults the heroes into outer space, where they’ll explore Rabbidy new open worlds in which every enemy is a doorway to a self-contained, turn-based battlefield. And it gives them new powers that can play off one another, encouraging players to customize their heroes to create the most devastating team synergies possible.

While Mario + Rabbids Sparks of Hope continues to deliver turn-based tactical battles, every fight unfolds in its own bespoke arena, which you’ll enter by colliding with enemies in the open worlds, or by investigating blobs of Darkmess – the goopy physical manifestation of Cursa’s powers. By decoupling the exploration from the combat, the developers were able to do more with each aspect of the game; the new planets are now freely explorable and filled with puzzles, side quests, dungeons, and optional enemies to tackle, while the battlefields can deliver focused combat experiences without any need for consistency with a larger landscape – or even with themselves, as battlefield layouts can be reshuffled with different configurations of enemies, obstacles, and hazards to keep players guessing.

These battles also ditch the traditional tactical grid, instead letting each hero move freely within a limited radius. Attacking will lock your heroes in place (meaning you’ll still need to worry about finding cover), but until then, you’ll be able to freely slide into enemies, leapfrog across the map with team jumps and pipes, and – in Mario’s case, after unlocking a few abilities – stomp on enemies from the air, or use his Dual Slinger blasters to target and fire from high above the battlefield. 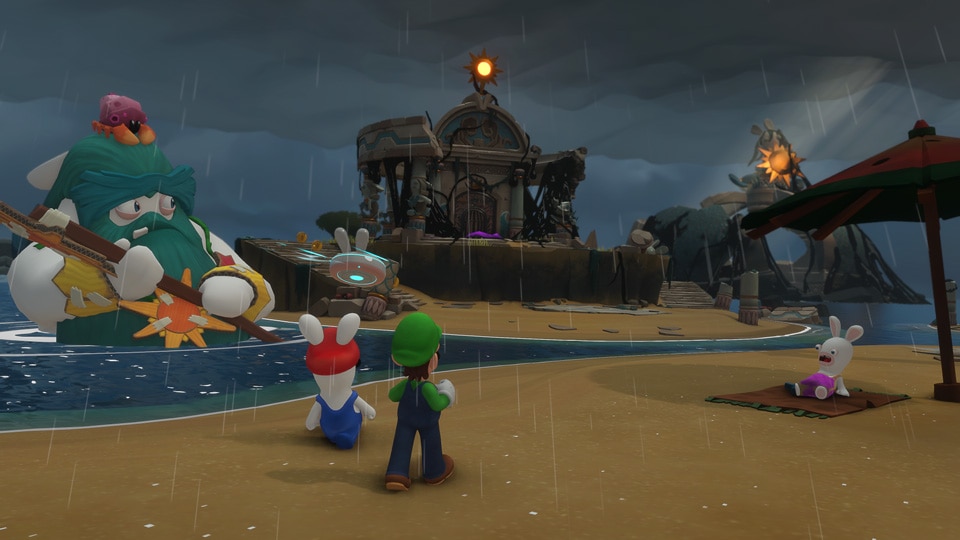 Mario’s not the only one sporting cool new moves; in fact, every hero has completely unique weapons and abilities this time around. Mario’s Dual Slingers can target two different enemies at once or deal big damage to one, and Luigi’s a top-tier sniper with the Sharpshooter bow. Mario and Luigi also keep their Hero Sight and Steely Stare abilities from the first game, which keep enemies in check by firing on the first one to move into the brothers’ line of fire.

Rabbid Peach, now so fixated on her phone that it’s actually mounted to her weapon, can effectively ignore enemy cover with an airborne salvo of rockets (or heal nearby heroes with a cry of “Hashtag healing journey!”). Rabbid Luigi can bounce his new Discruptor between multiple enemies and weaken them with his breakdancing, while Rabbid Mario’s powered gauntlets make him a devastating melee combatant and counter-puncher whose fists can reach longer distances as he levels up.

Peach now packs a shotgun-like Boom-brella, which attacks enemies in a wide arc similar to her previous Boomshot, and she can also create a Team Barrier, which protects nearby heroes with floating shields that grant full damage immunity from the next few hits. Rabbid Rosalina – whose plush Kaboomer can spray devastating hails of bullets – can bore nearby foes into a defenseless stupor with the power of Ennui. And Edge, a mysterious punky newcomer (and possibly the first-ever serious Rabbid) can slide-dash into enemies to deal damage up to three times per turn before hurling her massive sword like a boomerang to devastate everything in its path. 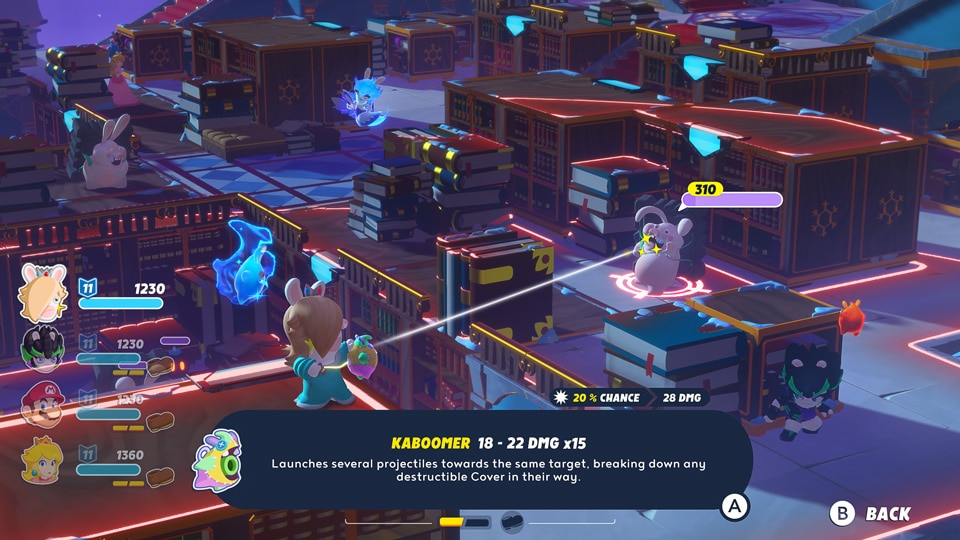 These abilities can all become more powerful depending on how you build out your heroes’ individual skill trees, and learning to effectively use them together can be the key to winning a quick victory – and to building a killer team. Want to send an indestructible tank behind enemy lines? Try casting Peach’s Team Barrier on Rabbid Mario, and point him toward the densest grouping of enemies you can find. You can also squeeze in a couple of (blatantly unfair) extra shots before the enemy’s next turn by setting Mario, Luigi, and/or Edge to attack the next thing that moves, and have a remaining hero slide-dash an opponent into the air (or better yet, blast them with a fire-infused attack to send them running) to trigger every motion-activated attack in range.

If you’re not happy with your current abilities, you’re free to re-spec and reshuffle your team at any time to find a combination that better suits your play style. Want to unlock Mario’s stomp at the expense of his health or weapon damage? Go for it. You can always unlock (or re-spec) those abilities later. 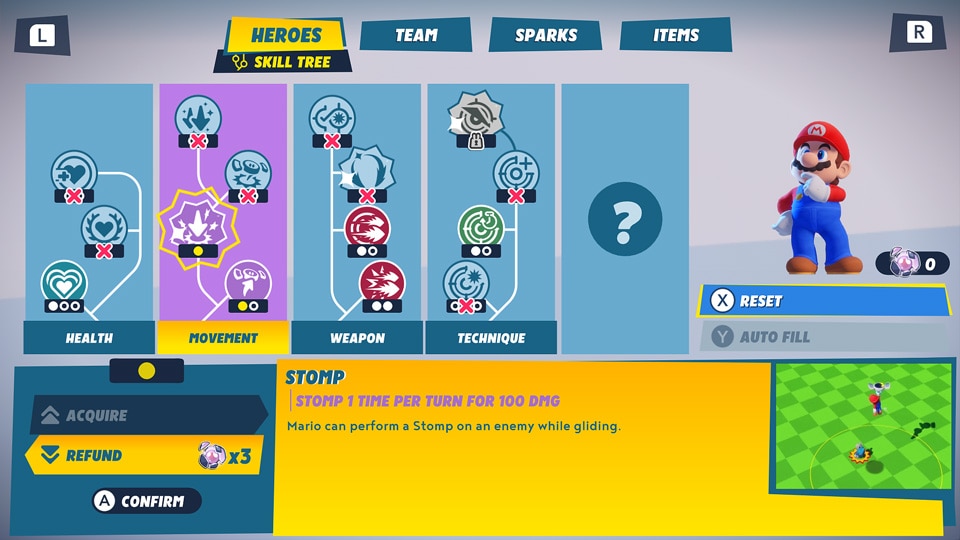 Another big addition is the arrival of the Sparks, fusions of Rabbids and Lumas that you’ll find hidden throughout the adventure. Once found, up to two can be assigned to each hero to augment them with elemental attacks and defenses, as well as passive buffs, like the ability to not get bounced into oblivion every time a Sea Stooge (a malevolent Rabbid wearing a seahorse costume) does a splash attack.

Sparks can be swapped between heroes, and each one has a name and a unique power; some can bestow helpful bonuses, like Starburst’s damage bonus for nearby heroes, or Aquanox’s splash-effect enhancement for their hero’s next attack. Other, like Toxiquake, can unleash powerful attacks that inflict lingering status effects on enemies. Each one can also be independently leveled up by feeding them the Starbits earned by defeating enemies, letting you make your favorite Sparks even more formidable. 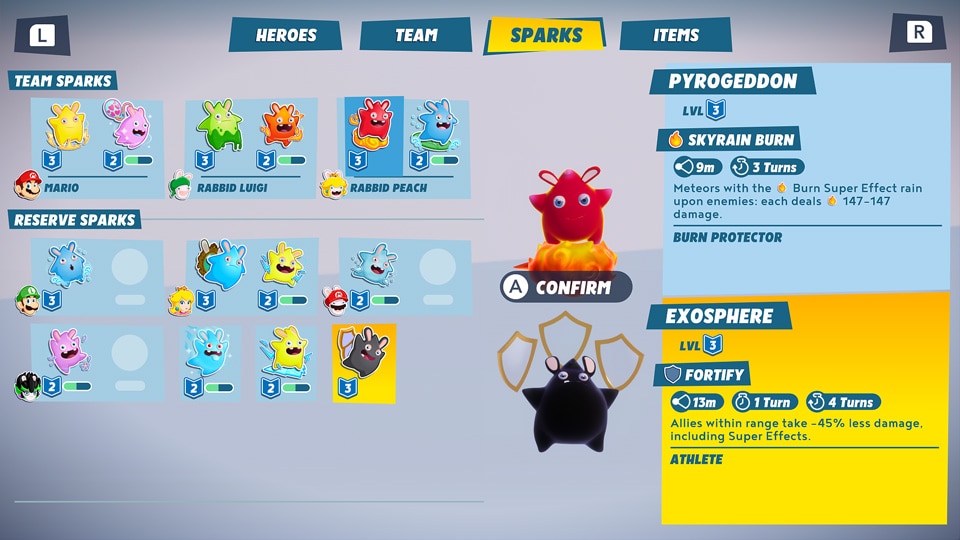 You’ll be able to experience the mayhem for yourself when Mario + Rabbids Sparks of Hope arrives on Nintendo Switch on October 20. In the meantime, check out the Rayman announcement and Wiggler boss fight from Ubisoft Forward, and get a look at Bowser’s big reveal as a teammate.