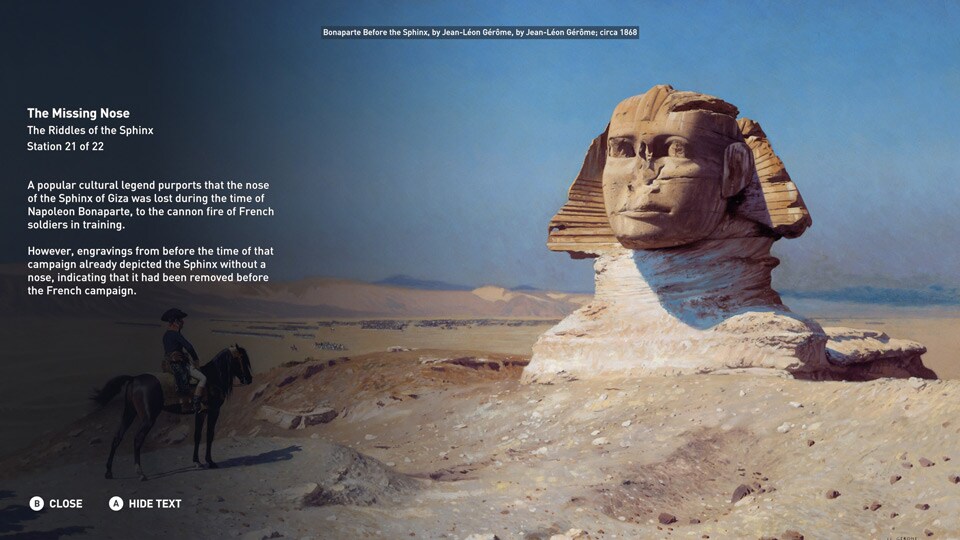 Discovery Tour by Assassin's Creed: Ancient Egypt is now available as a free update for Assassin's Creed Origins owners (or as a standalone purchase for $19.99 USD on PC), giving players the option to experience its sprawling, Ancient Egyptian open world as a living museum. Letting players explore non-violently as one of 25 different avatars, the new mode features 75 interactive tours that dive into the history behind the game's reconstruction of the ancient world.

Designed as an evolution of the series' Animus Database, as well as a way to make the game more accessible to teachers and students, Discovery Tour's exhibits feature illuminated pathways that players can follow at their own pace, with stations that showcase (for example) the histories of Egypt's landmarks, its geography, the day-to-day activities of its people, and the lives of its historical figures.

"We want the Discovery Tour to be accessible for anyone," says Maxime Durand, the Assassin's Creed franchise's resident historian. "That's in terms of content, but also in terms of accessibility in the game design. All the tour starting points are physically available in the 3D world, but you can also browse the tours on your 3D map, look at them with your eagle and fast-travel to tours, look at the content menu, and then you can go deep into all the different tours in the menu directly.

"Our goal is to be as generous as possible, to give as much information as possible, and also to explain the way we make these games," says Durand. "That was something we felt would enrich the experience a lot."