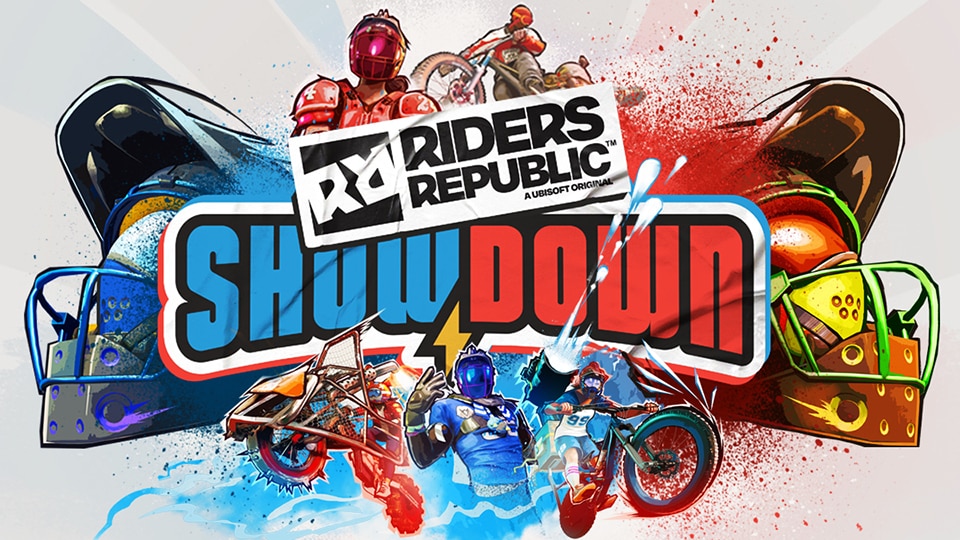 It's about to go down in Riders Republic Season 2: Showdown, available tomorrow on Xbox One, Xbox Series X|S, PS4, PS5, PC, and Stadia. Take on the competition in new mass races, get access to the new Showdown arena with its own multiplayer mode, and equip new gears called "toys," which open up a brand-new way to play. And for bike enthusiasts, you can now ride on a single wheel in style on your front or back wheel on all bikes except heavy ones.

Enter the Showdown arena and face off in a 6v6 multiplayer mode where two teams compete to collect as many lightning bolts as they can. You and your team can select one special toy at the beginning of the game, which you can use to help the squad or disrupt your opponents. Choose your toy wisely: use the Spider to drop traps and super-jump all over the map, use the Juggernaut to charge at your enemies and destroy their traps, or use the Sniper to fire snowballs at your enemies. As you collect lightning, deliver them to your banking zone to score points. But beware - opponents can trick you into bailing before banking and collect your fallen bolts.

Season 2 also introduces the new clan feature, which lets you create your own community of players using an in-game specific friends list of up to 64 members. You can name your own clan, make it private or public, and each member will have their clan tag added to their username throughout the game. Squad up with your teammates and take on the new season progression, where over the course of seven weeks players can unlock exclusive rewards and take part in special activities and live events, like the Rabbids Takeover event starting May 18.

If you own the Year 1 Pass, you'll get early access to two toys, the Spider and the Juggernaut. Get the Year 1 Pass with the Riders Republic Gold or Ultimate Edition, or as a stand-alone purchase. Also available for separate purchase is the Welcome Pack, which comes with 2,300 Republic Coins and a new legendary outfit. For more on Riders Republic, read about how algorithms were used to create Riders Republic's trail network, and check out gTV's behind the scenes documentary.