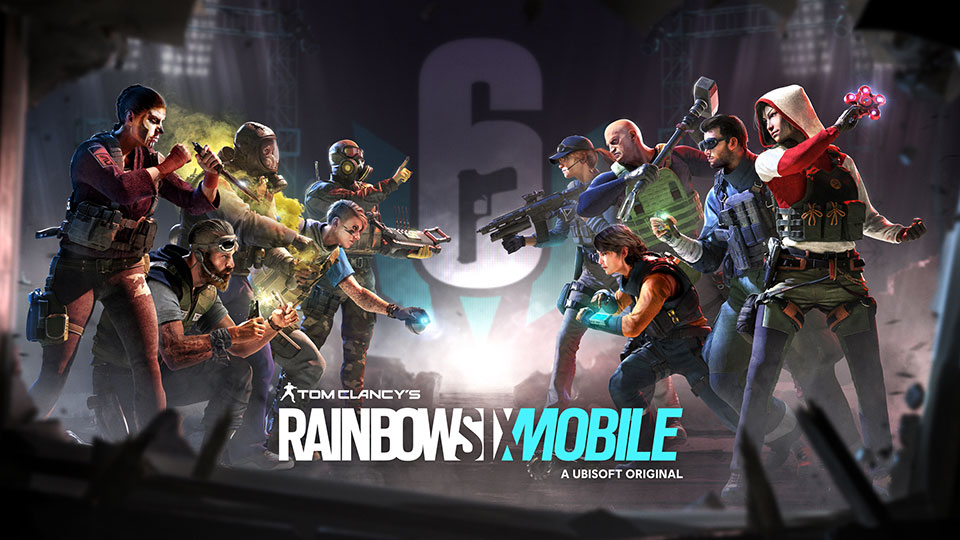 Rainbow Six Mobile is coming to iOS and Android devices, adapting the tense, tactical firefights of Rainbow Six Siege into a free-to-play mobile package. Featuring voice chat (along with a single-tap ping system), and cross-play between iOS and Android, Rainbow Six Mobile’s 5v5 matches unfold across such familiar maps such as Border and Bank, with a variety of game modes including Bomb and Secure Area. The action is streamlined for mobile, but the gameplay is far from simplified; players can smash holes through destructible walls (or reinforce them), customize weapons and loadouts for familiar Operators, and deploy their unique gadgets.

That’s just the beginning, says Creative Director Justin Swan. Players looking to try Rainbow Six Mobile early or get the latest updates can sign up for upcoming tests at rainbowsixmobile.com; in the meantime, we sat down with Swan to chat about the process of bringing tense, high-stakes, close-quarters shooter action to mobile.

Is Rainbow Six Mobile a re-creation of the Rainbow Six Siege experience on mobile, or will it be something completely new?

Justin Swan: It's both, actually. First, it’s like the full-fat version of Rainbow Six Siege that everyone knows and loves – the Operators, their abilities. Not all the Operators that Siege now has in its roster, we’ll have more to share on the exact Operators closer to launch. The maps are roughly the same maps; there's a bit of destruction that's been changed, and other little things have been optimized for mobile – like removing ladders, because they don't really add that much to the mobile game; there are other ways to get to different spots, and they just add more complexity to navigation.

But then we're trying to expand in a lot of places, which is why I'd say it's not just the same thing. We're adding more onboarding into the game, and different in-depth Operator unlock and progression systems. And looking toward the future, there's a reason it's not called Rainbow Six Siege Mobile; it's called Rainbow Six Mobile, because it is the mobile representation of the entire Rainbow Six brand. It's starting off like Rainbow Six Siege, but it'll evolve very much into its own thing. 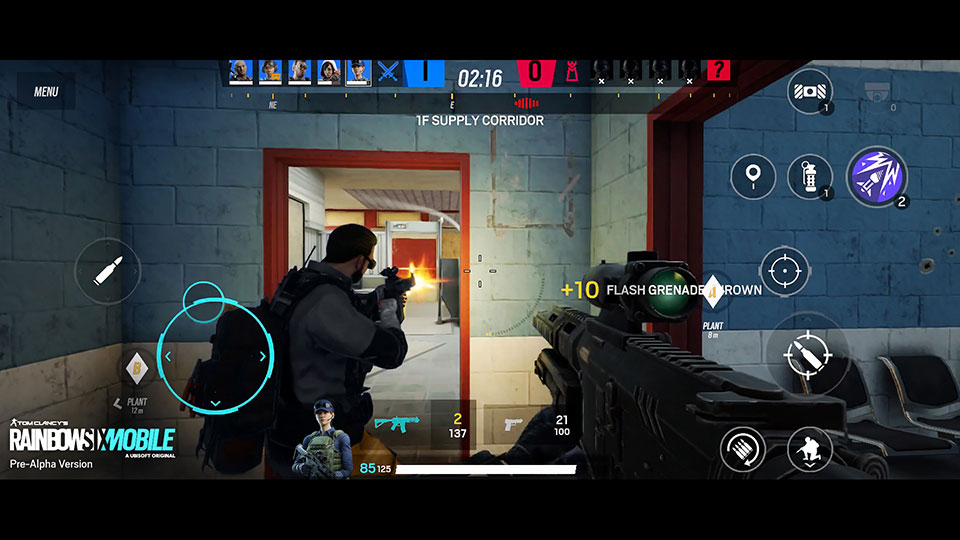 Rainbow Six Siege has been through some seven years of refinements and balancing. Is your goal to recreate that balance, or will Rainbow Six Mobile have its own?

JS: We do want a little bit of a different balance, mostly for approachability. And as I mentioned earlier, we’re trying to expand the audience quite a bit. Two quick examples: One is that we want time-to-kill to be a bit slower. It takes about 50% longer to take down an enemy in Rainbow Six Mobile than in Rainbow Six Siege. That's still a really fast time to eliminate, but it's a little nicer, and a little more forgiving than in Siege.

Also, we have guaranteed DBNO – down, but not out. In Siege, you can be revived by another player. And this creates really cool moments. Some of the most interesting moments are, like, “oh, I'm down! Come save me before I bleed out!” But then the other team is like, “it's a trap!” And they're waiting for your teammate to come and try to save you. We wanted to create more of those moments.

It’s making some changes like that, while still maintaining the same iconic weapons that the Operators all have; Mute still has his shotgun and his Uzi, and we didn't change that, but their tuning has been adjusted. Recoil is another good example; the recoil system is very strong in Siege. We've brought it down a little bit, but it's still there. Every weapon still has its own recoil pattern, but it's been reduced a little bit to, again, make things a bit more approachable to your normal player on a touchscreen.

We’ll also make changes along the way with help from our community. They will play a large role in helping shape and improve the game and their feedback during our test phases will be invaluable.

How did you decide which Operators to launch with?

JS: It was a combo of two things: first, from a gameplay perspective, which Operators create the most interesting meta? You've got the soft walls that get reinforced and then destroyed by Thermite; Thermite getting blocked by Mute; but Mute being stopped by an EMP grenade. And those are the kinds of things that make up the Siege experience. 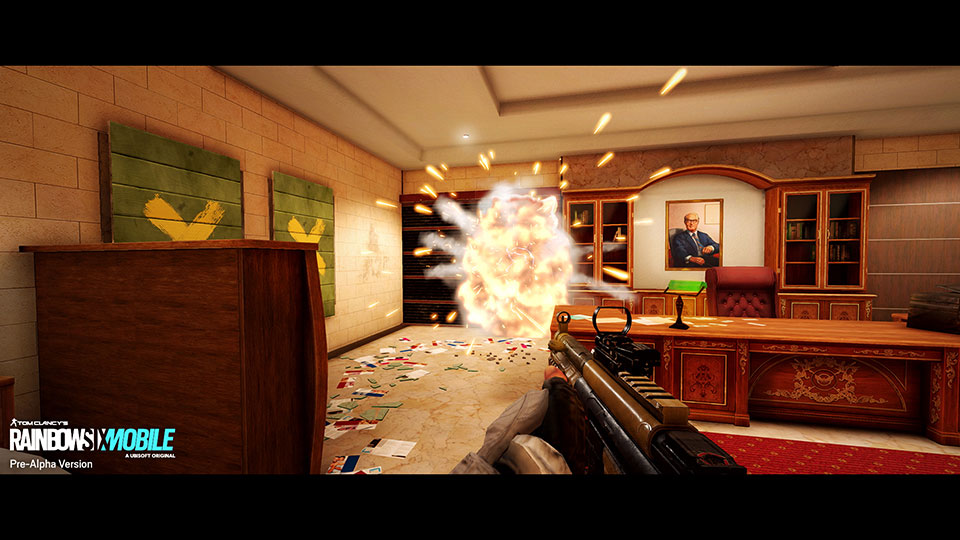 So that was part one; part two was, which Operators are the most popular? In collaborating with the Rainbow Six Siege team, we know that Ash is really popular. Hibana is very popular. Sledge, Thermite – these really well-known, classic Operators. We’ll combine those two things to come up with our starting roster.

Other than portability, what does developing for mobile let you do that a console or PC might not?

JS: The portability is of course huge. Mobile also lets us reach more players, because it is a free-to-play game, so a lot more people will give it a try and come in and test it out. Also, we can be extremely fast around live operations; we can push content out a lot faster, and also manipulate the game through the live operations. Because we got to build everything from scratch, knowing that we're going to have these live game ambitions, it let us do things that were a bit more in line with mobile expectations.

Also, portability helps us increase the number of players, reaching a much larger group and a newer audience. It doesn't just have to be people who have high-end gaming PCs and consoles. That really is pretty cool, and it lets us do other things, too. With a larger daily userbase, you can have more playlists, because you have more people in the matchmaking pool.

The ease of updating the games lets you do really cool stuff. When you're moving that fast, you end up with a really engaged community, and that's what we see with Siege: They've got a great community, and I think we're going to really be able to run that engine and get people coming in every day when there's something new in the game.

How will progression be handled in Rainbow Six Mobile? What will players be encouraged to purchase?

JS: Mostly it is around cosmetics. We do have an unlock system for the Operators; just like in a lot of games, you might save up a bunch of in-game currency, and then you'd use that currency eventually to permanently unlock an Operator. We've done a different approach that I think is pretty cool and innovative, where we offer the ability to one-off try Operators that you don't yet own – and through trying them, you slowly, permanently unlock them and earn them yourself. So it's a play-to-get-it type of thing. 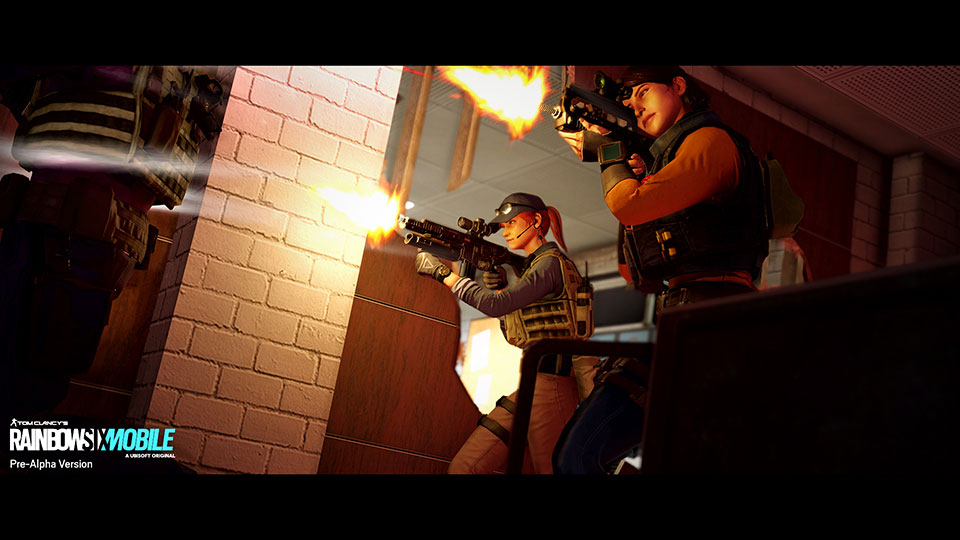 Once you’ve unlocked an Operator, then you have the progression story with that operator. There's no power growth or what I would normally call vertical progression. We have what I call a horizontal progression. If you look at collectible card games, you want to collect all the cards so you can build the coolest deck, and that's kind of how we're looking at our Operators. You want to get all of their loadouts, you want to get all of their different attachments. We are also introducing perks into the game, so every operator can equip three perks. You're going to want to collect all these things, and take part in live events where new ones are coming out.

But the goal is for it all to be equal. Really, you're just choosing: “How do I want to play? How do I want this Operator to work?” A really cool example is Sledge. He can knock down soft walls with his sledgehammer, and he can do it 20 times in a match before he can't use his hammer anymore. One of the perks you can eventually get for Sledge is Hard Hammer, which is a one-use perk where you can hit and make a small hole in a reinforced wall, but then your hammer breaks. So now, if you choose to have this perk equipped on Sledge, you have a very weak hard breacher, but you could also choose to do a different perk for Sledge. We joke around, like, what if he had two sledgehammers, and he's swinging like crazy and smashing everyone in a room?

Will players be able to use their existing Rainbow accounts with this? Will anything carry over in terms of cosmetics or other unlocks?

JS: Yeah, via Ubisoft Connect; the shared Ubisoft Connect account will connect you across both games. Because the games are so different, though – especially with one being free-to-play and one being premium – we can't share their economies, so you won't be getting R6 Credits in one game and use them in the other.

Directional audio is an important part of the Rainbow experience. How do you recapture that on mobile? Will you encourage players to wear headphones?

JS: We know there’s a lot of great feedback on the directional audio in Rainbow Six Siege, and we wanted to recreate it for Mobile, but with the sound off. We’re really excited about how we’ve transformed the audio experience for Rainbow Six Mobile. 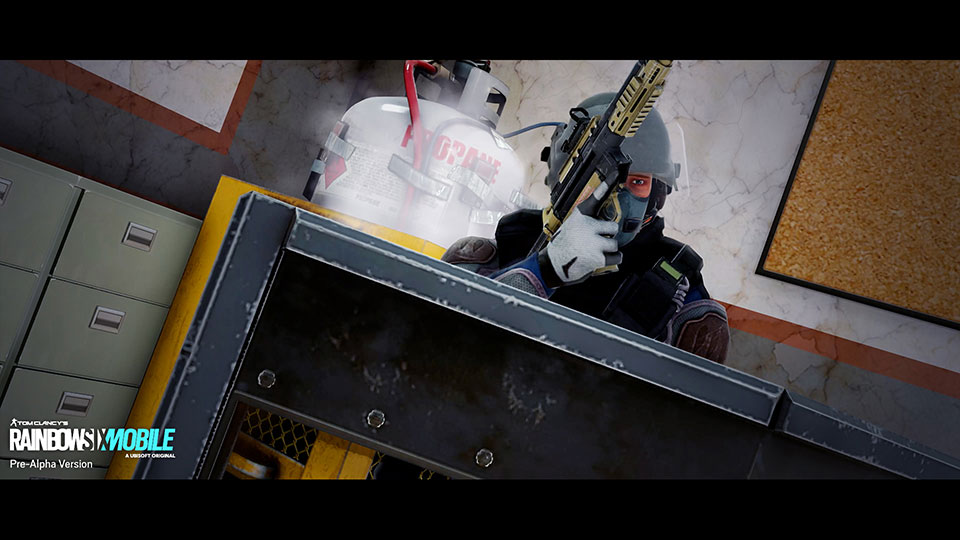 We knew this was important and we’ve been putting a lot of time and testing into it, and we can’t wait to get the community’s feedback.

JS: One feature that I really like, we call it tactical focus or TAC focus, which tries to support Siege-like gameplay. One of those things you do in Siege is, you lean around corners, you hold the line, especially if you're in defense and you're waiting. You just know someone is going to come down this hallway. If you're a pro player, you're going to always make that shot. We wanted to kind of make even a newer player feel like a pro player. If you press and hold your ADS, or aim-down-scope button, for two to three seconds, it zooms in, the edges of the screen darken, the sound visualizer weakens, all the sound dims, and you move way slower – but if someone enters into your reticle, you'll get the shot. It'll instantly fire at them, but only if you're in TAC focus.

How do you recapture the precision that Siege requires with a touchscreen?

JS: Touchscreen controls have gotten pretty advanced. There's so much stuff you can do around how you smooth the movement curves and things. 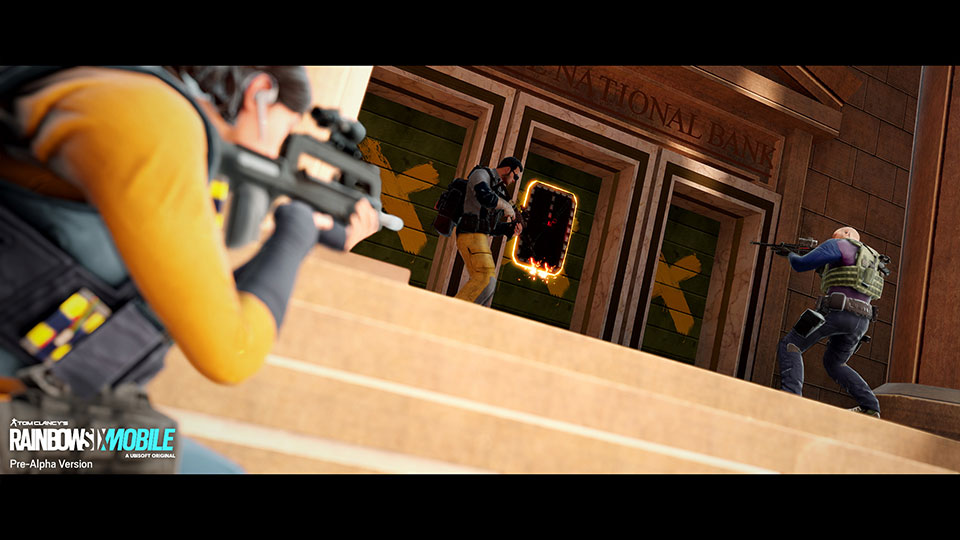 For example, for drones and small gadgets – very small on a screen, very hard to hit if you're in action – we use our Aim Assist, which will mean that you don't have to be totally on it; you'll make the shot and still get it. Again, it's part of the idea that if a pro player would be able to do something no matter what, very easily, how do we make it so that a new player can also do that thing? Because it's not about pixel-perfect precision in aiming, it's about the strategy, and the tactics, and the thinking. We want to try to get the difficulty of the actions out of the way as much as possible, so I can spend my time, my effort and energy, thinking about how I play the game.

To sign up for a chance to test Rainbow Six Mobile, visit rainbowsixmobile.com. For more on Rainbow Six Siege, check out our Demon Veil Operator and Gadget Guide, visit our dedicated news hub, and find it for purchase at the Ubisoft Store.