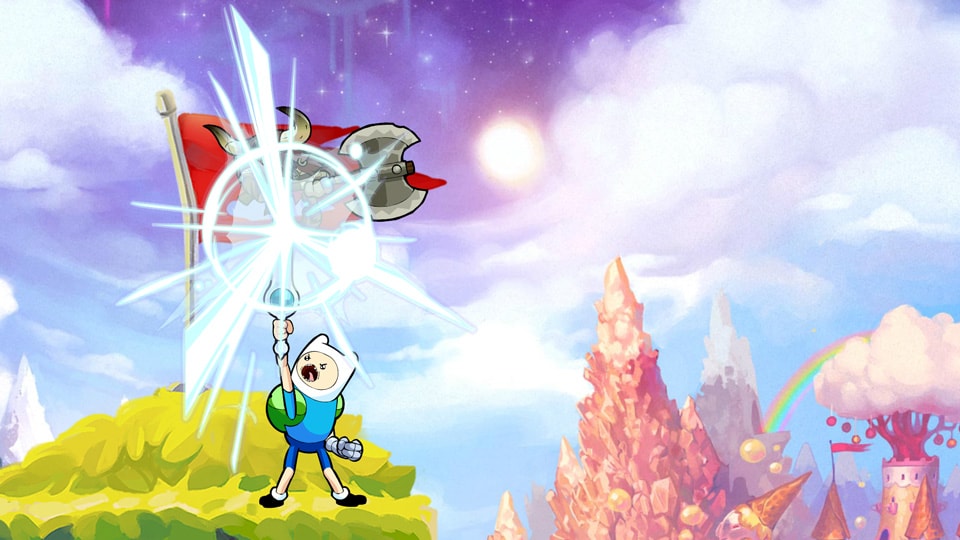 It's adventure time in the halls of Brawlhalla, so come on, grab your friends, and prepare to get mathematical! Jake the Dog, Finn the Human, and Princess Bubblegum from Adventure Time are available for 300 Mammoth coins each in Brawlhalla as of right now during a limited-time event ending June 25. Additionally, the crossover brings a new mode, map, and themed KO effects that will stick around after the event ends.

Finn, Jake, and Princess Bubblegum exist in Brawlhalla as alternates to existing Legends, but they're more than just reskinned characters; they're Epic Crossovers that feature their own appearances, signature powers, animations, and sound effects. Finn's powers and abilities mirror those of Jhala, Jake mirrors Kor, and Princess Bubblegum mirrors Lord Vraxx. Each character comes with six signature attacks and two Adventure Time-themed weapons. After the special event ends on June 25, all Adventure Time Epic Crossovers can be purchased from the in-game store for 300 Mammoth coins each.

If our heroes have taught us anything, it's that they're stronger together, which is why the new Buddy Mode lets you control two Legends simultaneously. Once the event ends, you'll still be able to play Buddy Mode as a custom match type. Additionally, a new Adventure Time-themed map, The Treehouse Stage, will be permanently added to the roster, while themed KO effects featuring Lady Rainicorn, Lumpy Space Princess, Gunter, and other sweet townspeople from the Land of Ooo will be added.

Brawlhalla is a free-to-play platform fighting game on PS4, Xbox One, PC, and Nintendo Switch, and features cross-platform play between Xbox, PC, and Switch. For more updates on all things Ubisoft, check out our E3 2019 news hub.