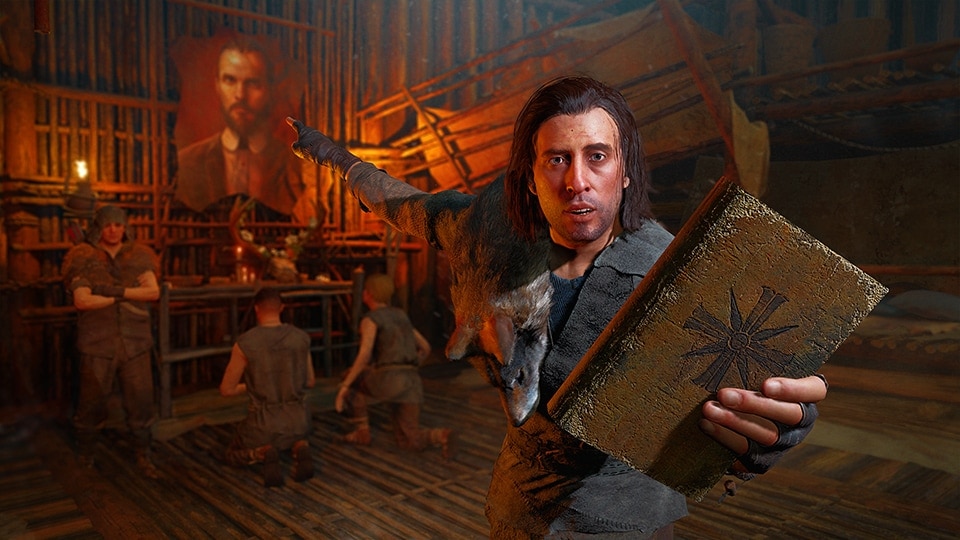 Far Cry New Dawn's Hope County isn't the pastoral wilderness you might remember from Far Cry 5. The landscape has been twisted and reshaped by 17 years of nuclear apocalypse, followed by a superbloom that filled it with brilliantly colorful plants and bitey wildlife. A rampaging legion of scavengers known as the Highwaymen have moved into town, grabbing territory from the survivors and building ramshackle outposts amid the ruins. It's a beautiful but deadly place, and the changes Far Cry New Dawn brings run much deeper than its setting, affecting everything from how weapons work to how you'll get around in this brave new world.

Far Cry New Dawn casts you as the captain of security for a man named Thomas Rush, who travels the ruined US to help pull struggling settlements to their feet. Upon arriving in Hope County, you're ambushed by the Highwaymen, an army of live-for-today bandits led by twin sisters Mickey and Lou. The nihilistic Twins don't appreciate you busting up their post-apocalypse party, and they're a constant presence throughout Far Cry New Dawn; when they're not onscreen, you'll see their influence reflected in their colorful, anarchic followers, and they'll rage in your earpiece whenever you interfere with their plans.

Separated from your crew, your main goals are to regroup, build up your home base at Prosperity – a fortified settlement of Hope County survivors – and make life as difficult for the Highwaymen as possible. After settling in at Prosperity, you're free to wander and pursue missions however you see fit. Specialists, Guns for Hire, and Fangs for Hire are scattered across the map, and they all need your help. Follow their radio signals, and you'll encounter a mix of familiar faces – including Grace Armstrong, Sharky Boshaw, Hurk, and Nick Rye – along with new ones, like sharpshooter Nana and enterprising survivalist Bean. There are even a few lethally loyal animal friends you can recruit, including Timber, a friendly Akita; and Horatio, a hulking boar that doubles as a living battering ram.

If you do them a solid – like finding Grace's stolen Saw Launcher prototype in a fortified trainyard, for example, or rescuing Horatio from slaughter – they'll repay the favor by lending you their skills. Guns and Fangs for Hire can use their abilities to help you in battle and pull you out of danger, while Specialists will join the brain trust at your growing settlement, letting you upgrade Prosperity's facilities to craft better gear, unlock new fast-travel options (which once again include the option to air drop to a destination, with help from a parachute or wingsuit), and leave Hope County on Expeditions.

Expeditions offer a chance to explore huge, self-contained locations across the former US, including a beached aircraft carrier, the occupied ruins of Navajo Bridge, and a not-so-abandoned theme park. The goal of Expeditions is to locate and steal back special packages from the far-ranging Highwaymen, defend yourself while your chopper pilot finds an extraction point, and then make a frantic getaway while trying not to get swarmed by angry Highwaymen.

The need to upgrade your base will become clear when you start meeting enemies who can stay upright after you empty an entire LMG clip into them. Taking a light RPG approach, Far Cry New Dawn's weapons and vehicles now have ranks, and to craft better ones, you'll need to upgrade your workbench back at Prosperity. A Rank II pistol can do more damage than a Rank I LMG, for example, and higher-ranked weapons tend to include cool additions like scopes and silencers that offset their ramshackle looks. With help from recruited Specialists and ethanol looted from outposts, you'll also be able to upgrade your selection of craftable vehicles, explosives, health items, intel maps, and even your maximum health.

Actually crafting all those things, on the other hand, takes raw materials. You can scavenge these from hidden treasure caches, which usually involve unique and potentially dangerous puzzles; or steal them from the Highwaymen, either by hijacking convoys or raiding outposts. You'll also have the option to "scavenge" outposts you've conquered, which repopulates them with a tougher contingent of Highwaymen and challenges you to take the outpost again and earn greater rewards.

Not everyone you'll meet in Hope County is a Survivor or a Highwayman. You'll also be able to make contact with the remnants of The Project at Eden's Gate, now reborn as New Eden. Embracing a more peaceful, reclusive, back-to-nature philosophy, the New Edeners can also become allies, helping you hunt the Highwaymen and tasking you with fulfilling strange prophecies. And while they may have rejected technology, they still harbor a mythic reverence for their missing Father, Joseph Seed, and his mind-control drug Bliss, so you can still expect plenty of hallucinatory weirdness when dealing with them.

Post-apocalyptic Hope County is filled with mystery, danger, and explosive potential for chaotic fun, especially if you bring a co-op buddy along for some road-warrior hijinks. Far Cry New Dawn launches on PS4, Xbox One, and PC on February 15. For more on Far Cry New Dawn, check out our previous coverage.