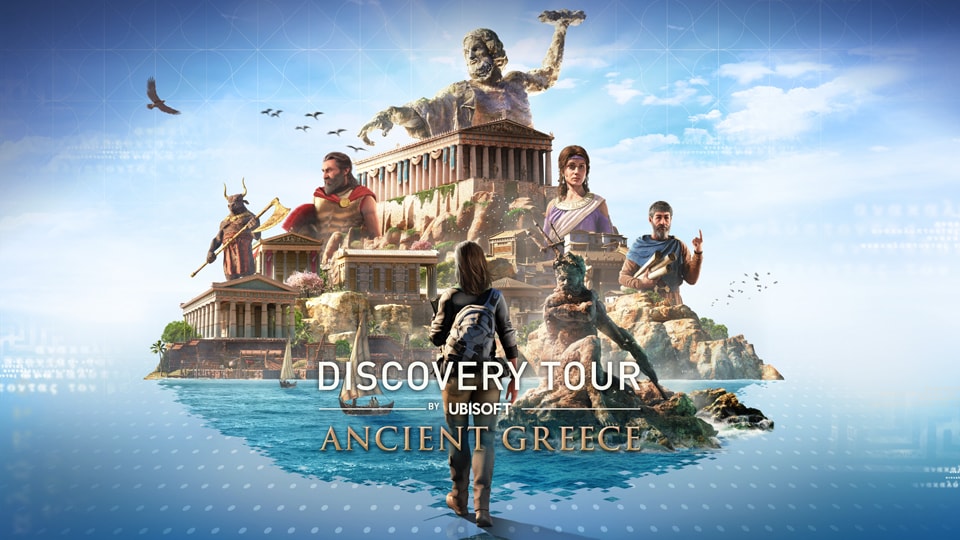 How did King Leonidas and his Spartans choose Thermopylai as the best place to defend against the invading Persian armies? When the Athenians faced overwhelming odds at the Battle of Marathon, how did they prevail? And what were the original Olympics really like? Discovery Tour: Ancient Greece, launching on September 10, answers these questions and more. Like Discovery Tour: Ancient Egypt, it was developed as an educational tool for teachers (but is open to anyone), and turns the immense landscape of Assassin's Creed Odyssey into a conflict-free, open-world museum of Greek history and culture.

Available as a free update for Assassin's Creed Odyssey, or as a standalone purchase on PC via Uplay, Discovery Tour: Ancient Greece is a chance to delve into the past and learn more about the conflicts, philosophy, myths, cities, art, and daily life of Ancient Greece. Its 30 different tours – to which you can fast-travel directly, or discover organically by running or riding across the landscape – are divided into narrated stations that fit their surroundings, often accompanied by paintings or photos of artifacts. Visit the ivory-and-gold statue of Athena inside the Parthenon, for example, and you can learn that the statue's immense cost was justified as a way of storing gold for emergencies, and that the pool in the statue's chamber was a way of regulating humidity and keeping the ivory from cracking.

An illuminated path runs through each exhibit, guiding you from station to station and helping to keep you on track. The path you've already followed will turn blue, while the route ahead shines gold, which can come in handy after the camera cuts away from you to showcase nearby sculptures or buildings, or to re-enact famous battles (using flags as stand-ins for armies). In addition to the off-screen narrators, each tour is also guided by one of five historical or fictional characters from Odyssey – Leonidas, Aspasia, Herodotos, Markos, or Barnabas – who will greet you at the start of each tour, and reappear at the end of it to quiz you on what you've learned.

You can jump straight to any tour at any time by finding it on the map, by picking a point on an illustrated timeline, or by browsing a menu of tours organized by topic. You don't even need to visit the tours to see what's in store, as the topic menu also lets you browse the exhibits and hear their narration. Conversely, if you're on the scene and want to get an even closer look at your surroundings, you can do something you can't in Odyssey: switch to playing in a first-person view, even while climbing, free-running, or exploring the depths of the sea. And Photo Mode is part of Discovery Tour: Ancient Greece as well, letting you preserve your favorite discoveries.

If you're more attracted to the "discovery" aspect than the tours, there's plenty of incentive to explore. Scattered across the landscape are hundreds of Discovery Sites, which are small, self-contained exhibits focusing on a particular landmark, event, or other point of interest; and a number of Behind the Scenes exhibits to give you more insight into how Assassin's Creed Odyssey was made. You can find all of these on the map, or spot them with the help of your eagle, Ikaros (but unlike the tours, you can't jump straight to them).

You'll be able to explore the world using six different avatars at the start (including two children, a boy and a girl), and as you complete tours and find Discovery Sites, you'll be able to unlock 29 more, including Sokrates, Pythagoras, Layla Hassan, and a (fraudulent) minotaur, as well as different versions of Alexios and Kassandra in a variety of outfits. (To avoid any confusion when using Discovery Tour: Ancient Greece as a classroom tool, each named character is marked as either fictional or real.) You can also unlock up to 15 different mounts for tearing across the landscape, including a unicorn, the winged Pegasos, and the fiery Abraxas.