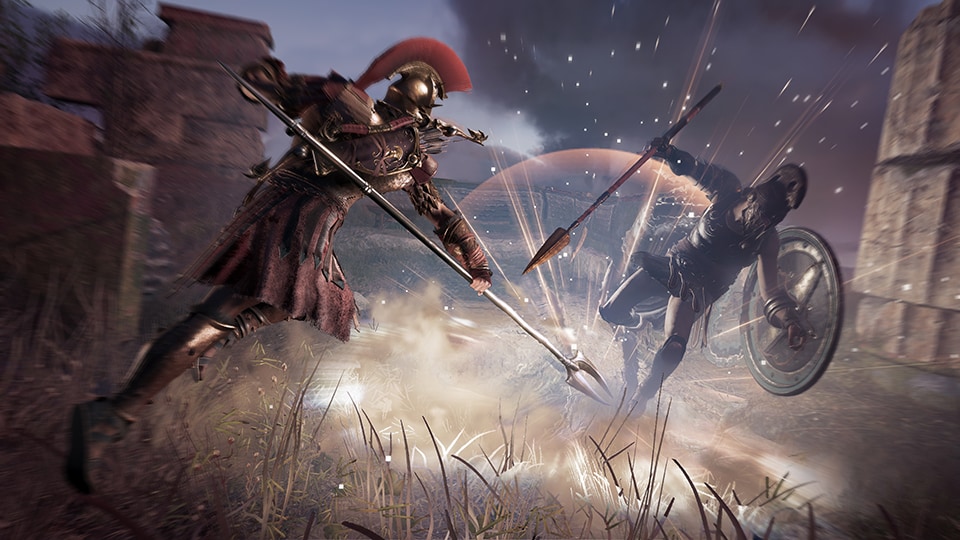 Over the course of Assassin's Creed Odyssey, you will explore the far reaches of Ancient Greece, gain powerful new abilities, and unravel hidden mysteries about your past. To aid you on your journey, we've compiled a list of some handy starter tips that cover combat, exploration, abilities, and more. Check out the video below and read on for spoiler-free tips to help you be the best misthios you can be.

On the starting island of Kephallonia, spend some time exploring off the beaten path and collecting a glowing ore called Orichalcum. Later on, you'll meet a vendor who trade exclusively in the rare resource, and in exchange, he'll give you epic or legendary gear. Exploring is often rewarding, and not every interesting spot or hidden treasure is marked as a question mark on your map.

Keep an eye out for cliffs or buildings with significant drops; these are great places to Sparta Kick enemies off of to take them out fairly quickly. The fall is often deadly, but there are situations when you won't want to kill your opponent. High-level captains or mercenaries can make valuable additions to your ship's crew if you recruit them, but you have to knock them out first. Here are four effective non-lethal takedown tactics:

You can also knock out the wild predator animals that attack you and, if you unlock the Beast Master ability, you can tame them to be your ally. They'll follow you around, fight anyone who messes with you, and make you feel a little less lonely.

If you're not sure wolf-taming is for you, remember that you can always reset your ability points using a small sum of drachmae on the abilities screen. This is a great way to try out different abilities, see which ones suit your style, and discover their different benefits. For example, the Rush Assassination ability not only lets you deal major Assassin damage to multiple enemies, it will also propel you quickly across whatever gap is between you and your target. Use it to move across spaces undetected and cross gaps you might otherwise have to climb around. And even though the Hero Strike ability is in the Assassin branch of skills, it's best used during full-on combat to do massive damage in a single, sweeping strike.

When you're out on the high seas, remember that you can stop your ship at any time and leave command, freeing you up to dive shipwrecks and sunken ruins or go ashore anywhere you like (not just the dock in the island's harbor). If there are sharks where you want to swim, use Ikaros to scout them from up high, then shoot them with arrows to clear the seas before you dive in. You can also dive into the water after cleaving an enemy ship in two in order to loot any chests before they sink into the briny deep.

You don't have to leave a beloved weapon behind just because it's a few levels too low. Visit a blacksmith to upgrade it to your current level, and while you're there, add some engravings to your current gear. They're not expensive, and the stat boosts can really add up to make your arrow shots more damaging or your hero more resilient to damage. And remember that you can toggle your head gear display on or off, in case you like the stats of a helmet but don't like how it hides Kassandra's awesome braid.

Finally, here's a list of some handy things you can do with your unlimited supply of torches:

Assassin's Creed Odyssey is out now for Xbox One, PC, and PS4. For more tips, check out the video above – and to learn more about the game and the historical locations that inspired it, check out our previous coverage.