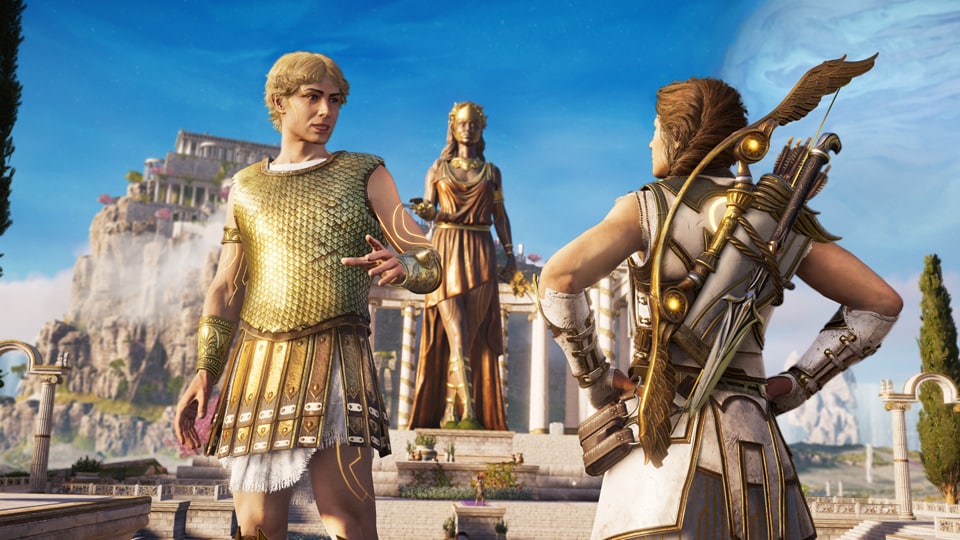 Assassin's Creed Odyssey took a big step into Greek myth this year with The Fate of Atlantis, a three-part post-launch story arc that brought Alexios or Kassandra into the Greek afterlife – and, eventually, to the titular lost city of Atlantis, once a teeming center of the mysterious First Civilization. If you haven't yet begun your journey into The Fate of Atlantis, its first episode – titled Fields of Elysium – is free from August 26 through September 1. During that period, players can download and keep Fields of Elysium on PS4, Xbox One, and PC (via Uplay, Steam, or the Epic Games Store).

Fields of Elysium transports players to Greek mythology's equivalent of heaven, a vibrant paradise of white cliffs and flowering meadows presided over by the Greek goddess Persephone (actually a member of the First Civilization, or Isu). However, this seeming utopia hides dark secrets and super-powered enemies, as well as treasure-filled labyrinths and four new enhancements for your Abilities, which let you wield the powers of the Isu in battle.

Once downloaded, Fields of Elysium is open to Assassin's Creed Odyssey players who've reached at least level 28 and finished the Between Two Worlds questline, along with the Heir of Memories questline. Players who want to jump straight into Fields of Elysium's content, meanwhile, can take a shortcut option and begin playing with a pre-leveled character (although you'll still need the Assassin's Creed Odyssey base game to play). Should you decide to continue your journey by purchasing The Fate of Atlantis or the Season Pass, any character progression or loot you earn in Fields of Elysium will carry over into the second and third episodes, Torment of Hades and Judgment of Atlantis.

Assassin's Creed Odyssey and its post-launch content, including The Fate of Atlantis and Legacy of the First Blade story arcs, are available now on PS4, Xbox One, and PC, and will be included in UPLAY+ when the subscription service launches on September 3. For more on Assassin's Creed Odyssey, check out our previous coverage.