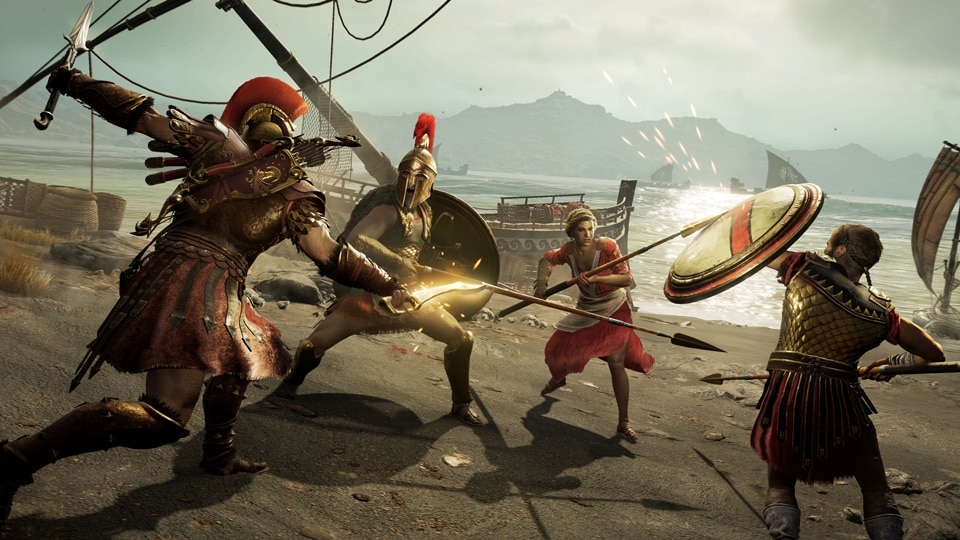 Announced and released during E3 2019, Assassin's Creed Odyssey's Story Creator Mode was quickly adopted by fans and would-be game designers, boasting 210,000 players, 4,700 creators, and 6,000 stories created within the first few days of release. We sat down with Assassin's Creed Odyssey Story Creator Mode Product Manager, Ellie Rhodes, to discuss how the update works and what the team is hoping players will learn from the toolset they've created.

Tell us how the Story Creator Mode in Assassin's Creed Odyssey works.

Ellie Rhodes: So, it's three different parts, basically. There's the story creator, which is [browser-based], and those are the tools that you use to create the quests themselves. You click and drag different quest objectives, write dialogue, and build your quest within this toolset. There's also the Story Creator Mode website, which is where you can browse stories that everyone has created. You can explore content, you can edit and publish your own content; it's kind of the hub for everything. And you have the in-game segment as well, which is completely cross-platform. Everyone can play anyone's quest as long as it's been published. You can find it in your main game and play people's stories.

**What do you feel is so important about allowing players to create and share their own stories within the Assassin's Creed universe? **

ER: I think that because the fans are so passionate about the world and the lore, and they've got so many stories that they want to tell, it's a really cool opportunity for them to actually do that. Everybody wants things to work out differently, everybody wants to tell a story that plays out the way they'd like it to, and now we've given them the ability to do that. We've always said that history is your playground in Assassin's Creed, and now you can actually do that! You can create your own playground within that world, which we think is super cool.

**During development, were there any particular stories created that stood out or stuck with you? **

ER: There's one that I love! One that one of the developers came up with when we were testing the limitations of how many characters you can have within one story. [In this story,] a character from late in the game tells you that a horrific army has been created, and they're terrible and fearsome. And you go to fight this army, and it turns out it's an army of Sokrateses. They're all clones of Sokrates! And you have to fight them all and take them all out. That's one that's definitely stuck with me [laughs].

Looking at all the different permutations and characters, is there a finite limit to the number of stories that can be told, or quests that can be created here?

ER: Essentially, it's infinite. We have some limitations on the tools, but it's very similar to what we actually have in-game with regards to the amount of lines that you can have with one instance of dialogue, or the amount of quests you can have within a story, or the number of objectives you can have within a quest. It's very, very close to what we actually use to make the game and has similar limitations with regards to the actual tech itself. Beyond that, it's endless possibilities, really. We have six different quests objectives that you can mix and match that we've chosen for simplicity and ease of use. They're objectives that will integrate well into stories and won't involve too much thinking; it'll mean that people can get started really easily.

**What do you hope that players take away from learning how to create narrative threads and build stories within games? **

ER: I would hope that players gain a new level of appreciation for the amount of effort and work that actually goes into creating games and I hope that they'll appreciate how difficult it can be to craft stories, make things make sense, and to make things engaging. I also hope that people will learn some of the skills they would need to break into the games industry themselves. We based the tools on our actual game engine and the tools the designers use every day. We did a lot of research into the UI, because the version that we use in the studio is much less engaging! We wanted [Story Creator Mode's UI] to fit within the branding, but we also wanted it to be exciting to look at, as much as possible. A lot of effort went into accessibility and making sure that people could understand clearly what was going on; it couldn't be too busy, and we tried to make it as easy-to-read as possible. I think players will gain a basic understanding of how we create quests in the game industry, which is awesome, and I think it'll be really useful for budding game designers.

Story Creator Mode is a free update to Assassin's Creed Odyssey that is now available on PS4, Xbox One, and PC. For more, check out previous coverage.