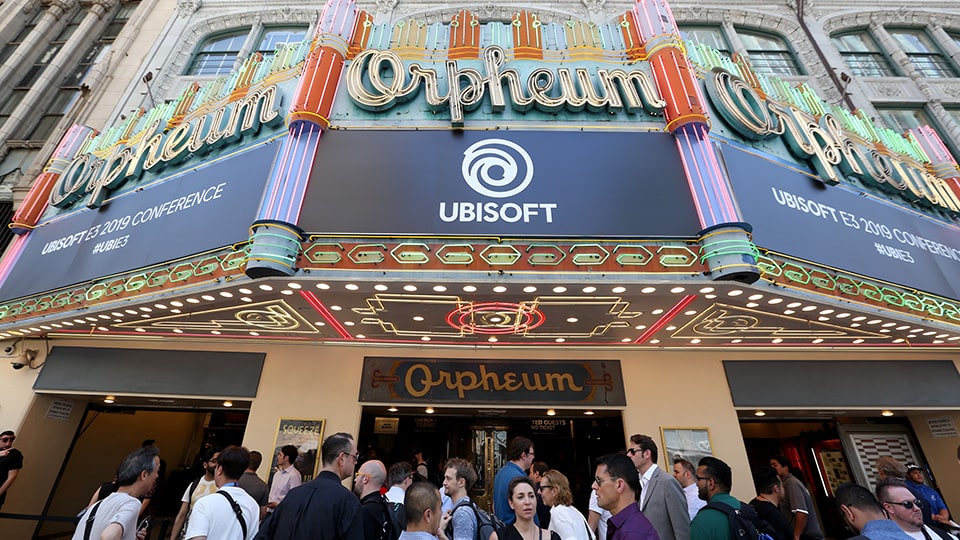 E3 2019 delivered a ton of exciting news, trailers, announcements, and updates. If you happened to miss any of it, we've got you covered with a quick recap of everything Ubisoft announced during E3, beginning with a quick look behind the scenes:

In the near future, London is being squeezed by the forces of corruption, crime, and oppression, and it's up to you to form a resistance and take back London. Luckily, Watch Dogs: Legion turns the city's entire population into potential recruits, any of whom you can play as. Adding a new operative to your squad can be done by profiling them with your phone, finding something they need help with, and doing a mission or two to bring them into the DedSec fold. You can then mold them into a tough Enforcer, a sneaky Infiltrator, or an even sneakier Hacker, using their backgrounds and innate perks to decide the roles and missions they'd be best for as you hack, drive, and fight through the campaign. You can recruit up to 20 people at a time, so if one of your recruits dies, you can easily switch to one of the other characters in your roster, or recruit another person.

Giving players a chance to fight back by turning future London's drones, self-driving vehicles, and vast surveillance systems to their advantage, Watch Dogs: Legion will arrive on March 6, 2020, for Xbox One, PS4, PC, UPlay+ and Stadia.

Set several years in the future, Quarantine will task teams of three Operators with stopping a deadly alien parasite from infecting human hosts before it's too late. The reveal trailer showed off well-known Operators Ela and Vigil, but that's just the tip of the iceberg, as many more will be deployed when Rainbow Six Quarantine launches on PS4, Xbox One, PC and UPlay+.

Strap on your skates and race for the goal in Roller Champions. This new game from Ubisoft Montreal is a fast-paced PvP action-sports romp. Teams of three face off in arenas around the globe as they race to rack up points and defeat their opponents.

Momentum and strategy are your keys to success, and you'll need to master shooting, tackling, passing, and dodging to become a true Roller Champion. Consecutive laps mean higher-scoring shots, so you'll need to decide when to maximize speed, when to deliver a punishing tackle, and when to shoot for the goal. Roller Champions just wrapped up a free E3 demo period, but look for more on the game as we get closer to its launch in early 2020.

Created by the team behind Assassin's Creed Odyssey, Gods & Monsters puts players on a quest to save the Greek gods on the Isle of the Blessed, a vibrantly colorful open world filled with mythological monsters. Playing as a nimble, fully customizable hero named Fenyx, you'll be able to wield gifts from the gods that range from magical weapons and attacks to abilities like gliding from cliffs, or chopping down trees and telekinetically hurling the resulting logs around the landscape.

Unfolding as a campfire story told by the poet Homer to his grandchildren, Gods & Monsters' storybook-inspired adventure is coming to PS4, Xbox One, Switch, PC and UPlay+ on February 25, 2020, and is also coming to Stadia.

Just Dance is turning 10 this year, and Just Dance 2020 is here to help you properly celebrate a decade's worth of dancing with 40 new songs that promise to have you moving and grooving, including:

Just Dance 2020 also packs fan-favorite classic modes like Sweat Mode and Kids Mode, and also features the return of co-op mode, so you can cut a rug with your favorite dance partner. It's also bringing an enhanced recommendation and playlist system; the ability to use the Just Dance Controller App on your phone; and Just Dance Unlimited, the on-demand subscription service with more than 500 songs from past games. Just Dance 2020 is coming to Wii, Switch, PS4, Xbox One, and Stadia later this year.

The new subscription service Uplay+, offers more than 100 games including new and upcoming releases, premium editions, DLC, and post-launch content, as well as Ubisoft's extensive back catalog of games, for $14.99/month. The service launches on September 3 for PC, and players who sign up between now and August 15 will be enabled with free access from September 3 through September 30.

Subscribers will also be automatically included in all betas for upcoming games and have access to the premium editions of those games when they launch. With Uplay+, you can download games directly to your PC and opt out at any time if you choose. If you decide to rejoin, all your previous game progress will be preserved. Uplay+ will be available at launch on PC, and is coming to Stadia in 2020.

Subscribers will also be automatically included in all betas for upcoming games and have access to the premium editions of those games when they launch. With Uplay+, you can download games directly to your PC and opt out at any time if you choose. If you decide to rejoin, all your previous game progress will be preserved. Uplay+ will be available at launch on PC, and is coming to Stadia.

The worlds of Splinter Cell, Ghost Recon, Rainbow Six Siege, and The Division collide in Tom Clancy's Elite Squad, a mobile RPG that lets you build a fighting force out of iconic Clancy operatives. Developed by Ubisoft Owlient, Elite Squad lets you assemble, outfit, and deploy five-person squads and take them into battle, both in a story-driven campaign and in skirmishes with other players. Coming to iOS and Android devices, Elite Squad is currently open for pre-registration – and players who sign up will get an exclusive in-game character, Ghost Recon Breakpoint's Cole D. Walker.

Speaking of Cole D. Walker, Jon Bernthal – the actor who portrays Ghost Recon Breakpoint's central antagonist – stole the show by bringing his dog Bam Bam onstage during the Ubisoft E3 2019 Conference. It was all a prelude to giving fans a fresh look at Ghost Recon Breakpoint, which pits the Ghosts against an army of drones and former comrades in the fictitious tech-company utopia of Auroa. Here, treacherous terrain can be as dangerous as any enemy, and serious injuries can hamper your aim and movement until you can pull yourself to safety and patch them up.

Challenging players to work together and think strategically while being hunted by highly capable enemies and automated weapons across a vast open world, Ghost Recon Breakpoint will arrive on October 4 for PC, Xbox One, PS4 and UPlay+ , and is also coming to Stadia.

During Ubisoft's E3 2019 Press Conference, new game announcements weren't the only focus. Several big updates were announced for many of Ubisoft's high-profile titles, such as:

For a full rundown of all the news we published during E3, take a look at our E3 hub.