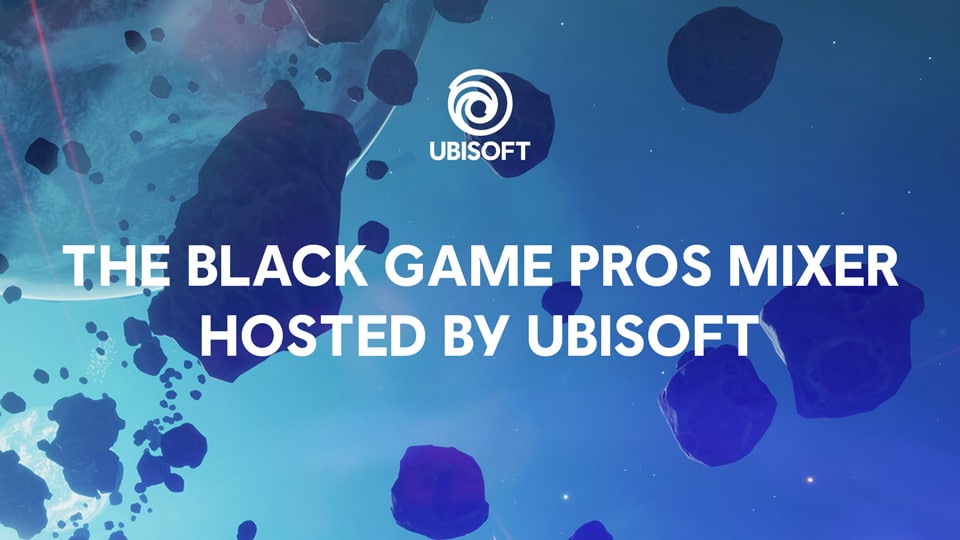 On the eve of E3 2019, dozens of Black gaming professionals gathered in downtown LA for an evening of food, drinks, and networking. The event was conceived by Ubisoft's own Director of International Events, Leon Winkler and Ubisoft Toronto Product Manager Andrien Gbinigie, and put on with the assistance of Media and Community Relations Specialist, Bélinda Yem. To kick off the mixer, Gbinigie and Winkler delivered opening remarks that immediately set the tone for the night that quickly became a casual meeting of peers, colleagues, and friends building connections and relationships without pressure.

"We have no agenda, we're not here to sell you games or anything," said Winkler during his opening remarks. "It's really about sharing experience and knowledge, networking, and getting to know each other."

To find out more about how the event came to be, why it remained casual, and how its organizers hope it will evolve, we caught up with Gbinigie, Winkler, and Yem during the mixer.

**How did the Ubisoft Black Game Pro Mixer get started? **

Andrien Gbinigie: It was an initiative that Leon and I came together on. We had an idea that spawned off of 28 Days of Black Cosplay, which is an initiative that many Black cosplayers do in the month of February to celebrate Black History Month. We wanted to take something like that and expand it to Black game professionals in general, and thought that E3 would be a good place for it. We took a lot of inspiration from what Xbox is doing with their own internal diversity and inclusion effort, Blacks in Gaming. Ubisoft has really been improving on that front in terms of what we do with women in gaming and what we do with disabled gamers.

Leon Winkler: I was inspired by what I saw at SXSW. They have this Black in Tech networking event that they do every year and I've been going to SXSW for the last few years. It made me wonder, "Why isn't there an event like this at E3? Why aren't there things like this at our industry's global events?" After that, I started talking with Andrien because I saw on his Instagram that he did this Black cosplay series. I saw that there was an entire community of Black cosplayers that I wasn't even aware of. So at first, the idea was maybe at E3 this year we could do a meet and greet for people of color that do cosplay, but sounded a little too niche, so I thought, "Why not have Ubisoft create a Black Game Pro Mixer?" So we did.

Bélinda Yem: I became involved a little later on. I'm part of the global communications team along with Leon. When he and Andrien came up with the idea, they came to me and asked me what I thought of it. I was really excited about it all because one of my main focuses in my role here is diversity and inclusion and I'm very passionate about it. I feel that as a Black woman, I am a representation of it, and it's a topic that matters a lot to me.

**What about Ubisoft helps enable an event like this? **

AG: Ubisoft genuinely believes in these types of causes and has these beliefs instilled in it as a company. We're a multinational company and we're already incredibly diverse and we're working towards bettering that all the time. Ubisoft's not about checking boxes, but rather making sure that we have diverse and inclusive teams that help us make better games and reaches out to different audiences. I feel like it was a no-brainer. Once we pitched the idea, there was pretty much unanimous support for it.

LW: I've been working at Ubisoft for 13 years and one of the reasons is because I know that I'm not judged on my color or my background, but my results. I've worked in the music and TV industries and it was different there. I feel at home at Ubisoft. Sometimes, at Ubisoft, if you want to do something, you just need to do it to create a benchmark and show that there is a lot of interest in a good idea. I think it's good for a company like Ubisoft to take a stance and go for something like this and do it unapologetically. It says a lot about the type of company Ubisoft is, the fact that we can do this, the fact that Yves personally said, "I like this idea, go do it."

BY: It makes me feel proud to work at Ubisoft. I am fortunate to work for a company that has ethical values and wants to include people that are as diverse as the world we live in. At Ubisoft, when we have an idea, when we want to put something together and create an initiative, people will always listen to you. If they think it's worth trying, they'll tell you to go for it.

**Why do you think an event like this is needed? **

AG: The tagline for the event is "Representation Matters." At the end of the day, videogames and the videogame community aren't homogenous. It's not just straight white men. There are a number of different communities and identities that are represented in the player base. Being able to see that representation in the games we make, and at events like this, is vital. I think an event like this is really needed; the response we had was phenomenal. We sold out in two hours and that shows that there's a demand for spaces like this where people can come together to network, exchange ideas, celebrate successes, and plan for the future.

LW: I think the main reason is that there is still a lack of diversity in the gaming industry. Ubisoft is very open to diversity, but it's a shame that when I started 13 years ago, there were no role models for me in this industry. I had no idea a career in games was even possible for me. That's why we're doing this, to show people who may attend this event, see that it exists, or read this article that there's an entire new world out there and you don't have to be a game developer to work in videogames. On top of that, there's an entire career path open to you even if you are a person of color or a minority and don't often see yourself reflected in these spaces. After 13 years, I find myself in a position where I lead the team that produces E3 and I have the feeling that I need to give back. I've come so far, the least I can do is to try to inspire people to keep on pushing and show them that it's possible no matter where you're from.

BY: It's very important to have events like this. The industry isn't as inclusive as it should be, but an event like this shows that not only are we aware of the imbalance, but that we're working to contribute to making a change. For me, it's very important to try to help. Having the courage and taking the initiative to host these types of events is meaningful. We just wanted to gather people from different backgrounds within the same room, so they could interact and learn from each other.

**You said during the opening remarks that there was no agenda or programing for the evening. Why did you decided to leave it relatively unstructured? **

AG: We wanted to take the pressure off people. Maybe in the future, as this develops, we might have some structured programming, but for the first one, we really wanted people to come together and have a place where they could unapologetically be themselves. A rising tide raises all boats, so the best thing that could come from an event like this is people coming together to work on or create something new.

LW: I always like listening to the community and hearing what works for people, and I think it would be a bad idea if Ubisoft was deciding how to dictate this event. It should be bottom up, and coming from the people we invited to this event and the feedback they can give us for the future. I'd like to co-develop this event with the people interested in attending.. If you make this a career event or a pitching event, people would be more nervous than they are now. It should be casual and for the benefit of the community, not Ubisoft.

BY: I've been talking to quite a few people at the event and it's a very relaxed vibe. Everyone just seems happy to be here and talk to people who are similar and who look like us and feel what we feel on a daily basis. Being able to be around other people like us makes me feel good, and that's how it's felt mingling among the attendees.

What would you like this event to become in the future?

AG: I would love for this to become a regular fixture at gaming events, be they industry-focused or player-focused. We called it the Black Game Pros Mixer because we wanted to be inclusive; it's not just devs, it's anyone who works in games. To be able to make spaces for people to be unapologetically themselves at more events on a more regular basis would be the dream.

LW: I hope this is the start to something bigger. I want this event to grow and become bigger. We have plenty of partners here from other organizations, so I'd love to see how we could partner with them in the future to see how we as an industry can take a stand and really push events like this. It's not only about lifting up Black people and people of color, but stimulating diversity.