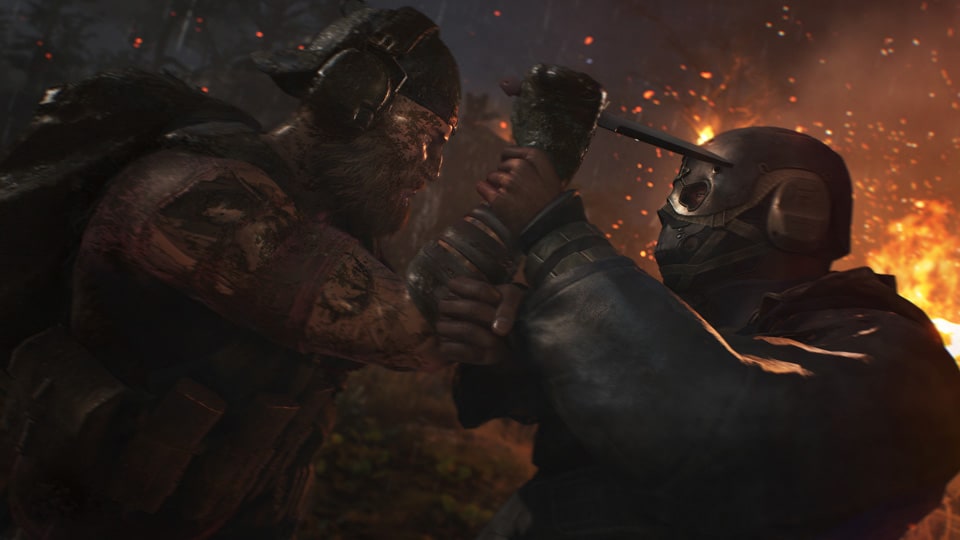 The first rule of the special forces is to always look cool. At least, that's according to Alex Auberton, one of the military consultants working on Ghost Recon Breakpoint. If you've ever seen an image of an operator (as special forces commandos are called) standing and holding their weapon in a relaxed way, you know what he's talking about. In fact, Auberton says, other soldiers tend to make fun of them for it. But it's about much more than looks.

"'Looking cool' is the codename for ‘stay relaxed, stay quiet, stay confident in any situation until the fight comes,'" says Auberton, himself a former Tier 1 operator in the French special forces. "And we know the fight will come, because when we are deployed, we sometimes have to fight several times during a single week. So we have to go into this battle, into this fight, full of energy. It can make the difference between living and dying. So we stay relaxed, and we handle our rifle in a very relaxing way. That's why we look cool."

In Ghost Recon Breakpoint, you'll need all the energy you can get. In addition to being relentlessly hunted by military drones and rogue operators who call themselves the Wolves, the terrain itself is your enemy, and underestimating a downhill slide can leave you seriously injured. To counter these threats, your Ghost is extremely capable, able to prep for missions, specialize into classes, and blend in with their environment. But they're not superheroes. In fact, they're more human than ever.

Auberton's experiences as an operator – as well as his motion-captured movements – are among those being used to bring a high degree of believability to Ghost Recon Breakpoint, its vast open world of Auroa, and in particular to the movements of the Ghosts themselves. When you're not in the middle of a firefight, for example, you might notice your Ghost idly slap the magazine on their rifle to make sure it's secure, or pop it off to glance at the ammo inside. They'll occasionally pat down their vest to ensure their equipment's still there, or – if you've got a flashlight or laser attached to your weapon – they might hold a hand in front of the light to check it. These actions might seem small or even fidgety, but each is based on the real-life habits of operators, and each has a purpose.

"When you work with operators, what you learn really quickly is that every move they do is calculated," says Jonathan Gingras, previsualization game designer on Ghost Recon Breakpoint. "This is built on years of combat learning, hours of training and repetition, and muscle memory, and in the end it's all about efficiency, economy, mastery, and safety. This is how they make order emerge out of chaos. This is how they control the elements around them."

All of the seemingly little animations your Ghost goes through add up to a small but significant part of building a convincing spec-ops fantasy. And they're not limited to equipment checks. For example, Ghosts moving through thick brush will push it aside with their free hand, while keeping their weapon at the ready. When they're trudging through water, they'll move slowly and keep their weapon raised above the waterline. When they're scrambling up a steep incline, they'll shift their balance with the terrain, and sometimes use their arms to climb or brace themselves. And when your Ghost goes prone to blend in with the environment, the way they camouflage themselves will adapt to their surroundings, whether they're digging into muddy terrain (that actually displaces with their movements) or pulling foliage over themselves.

"It's a nice puzzle, putting all the animations together," says Gingras. "It's fun. And then you start navigating, and you're like, ‘Man, it's working!'"

Even the way your Ghost interacts with other characters can change depending on context. When picking up a body, for example, a wounded ally will be treated much more gently than a dead enemy. And speaking of enemies, attacking them close-up – whether silently or in the heat of combat – takes the form of brutal new close-quarters combat (CQC) attacks. These tend to be even rougher – with broken limbs, smashed faces, and whatever else it takes to quickly disable an enemy – if your Ghost wants to keep a target alive and interrogate them for intel.

"Taking somebody out is no small task," says Gingras. "It takes willpower, it takes skill, but it also takes resolve. The enemy wants to survive just as much as you do. And we really wanted the player to feel that struggle, to feel that life was on the line. So we went to great lengths to try and cover all the different scenarios that were linked to those CQCs, and also to try and match reality as much as possible."

These animations come straight from motion-capture sessions with Auberton and others, which were often performed on difficult terrain. That means that when your Ghost loses their footing and takes a tumble downhill, it was captured by an actual stunt performer. And if you suddenly switch your stance or direction while running up a hill, and your Ghost's whole body twists with the effort, well, that's because someone like Auberton did that, too.

"My legs still remember" one of those motion-capture sessions, says Auberton. "[Gingras] asked me, ‘Alex, are you able to do three days of motion capture [running up and down] a slope in a row?' And I was like, ‘Dude, I'm a Tier 1 Special Forces operator, I have nothing to worry about with a slope!'

"Then [Gingras] asked me to walk, run, turn, crouch, aim while crouching, like hundreds of times," Auberton says. "I remember [he] asked me to run into the slope and then to turn back crouching, aiming, and to keep moving in reverse. I didn't do any more working out during the whole week."

Ghost Recon Breakpoint launches on PS4, Xbox One, and PC on October 4, and will be available on Stadia at launch. For more on Ghost Recon, check outour previous coverage .