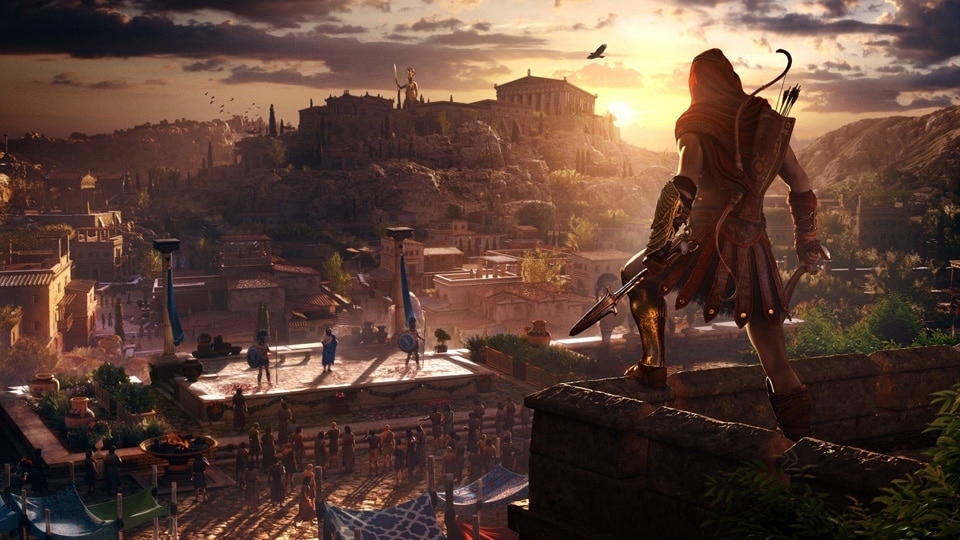 In Assassin's Creed Odyssey, you can fight in massive beachside battles, dive off the tallest cliff in the Peloponnese, and captain a warship of fierce warriors. While each of these features function as new or returning gameplay opportunities, they're also the product of the Ancient Greek setting. Odyssey's Greece is unlike any setting in franchise history, and it was up to the teams of World Director Ben Hall and Art Director Thierry Dansereau to craft an authentic recreation of that world.

To start, the teams closely examined mainstream depictions of Ancient Greece, focusing on films and videogames that took place in the region. While there are many forms of media centered on Greece, none had accomplished what Odyssey was setting out to do: take a pivotal moment in history (the Peloponnesian War), and build a deep and fleshed-out world that would keep players engaged and empowered as they explored every inch of it. To fully understand the world they were trying to create, the development team needed to see Greece for themselves.

The problem with visiting Greece today, and attempting to recreate it as it was 2,500 years ago, is that most of the remnants of that time lie in ruin. The team quickly realized that they would need expert help if they were going to do the setting the justice it deserved. Luckily, they met Dr. Stéphanie-Anne Ruatta on their first scouting trip to Greece. With a PhD in classical languages and literature and the ability to read ancient Greek, Ruatta was just the expert the development team needed. In fact, she was such a valuable resource that they soon offered her a role on the project full-time as an in-house historian. With Ruatta's knowledge and connections, the development team took three scouting trips to Greece to visit as many locations as possible to ensure that their version of it felt authentic. In the end, the scouting trips proved invaluable, not only in teaching the team what Greece was, but also what Greece wasn't.

"After going through all the media we had gathered and watching lots of cool movies, quite often Greece was overcast and brown," says Hall. "It was de-saturated, monochromatic, arid, and flat. That is not what we experienced when we went to Greece." Instead, what Hall and Dansereau found was a colorful and vibrant country with a wide variety of natural landscapes. In fact, their research revealed that Ancient Greece was even more colorful than the contemporary country.

"Most people, until recently, thought that everything was white when it comes to architecture, statues, and pottery," says Dansereau. "But according to archaeologists, color pigment was found on almost everything. Using this knowledge to our advantage, we had to add colors to almost all man-made structures. This gave us the unique opportunity to more accurately recreate Ancient Greece as it was two thousand years ago. The bright colors helped to give detail and depth to the sculptures."

Coloring the man-made buildings and monuments allowed the team to inject a much-needed dose of color into Greece, but it also helped reveal one of the reasons the Ancient Greeks decided to paint them in the first place. It can be difficult to see the artistry in shallow relief sculpture when it's carved out of white marble; exponentially so when they're placed dozens of meters above the viewer on a temple façade. By coloring their buildings and sculptures, the Ancient Greeks added a necessary layer of contrast to make their creations more legible, a benefit the Odyssey team was able to take advantage of as well. While this knowledge presented an advantageous opportunity for Dansereau's team, Hall's team was challenged by Greece's unique topography.

"The first thing [Creative Director Jonathan Dumont] said to me when he got back was, ‘Ben, you're going to have to look at the world, the terrain is insane. It's going to blow your mind.' And it really did," says Hall. "I remember sitting in Sparta, looking across at Mt. Taygetos, and just thinking, how the hell are we going to make that in the game? But we also needed to make sure that players never got fatigued. So if you wanted to climb one of these mountains, you could. If you saw something, you could go there. But it wasn't going to take you forever to get there, or be boring to get there. So early on, that was definitely one of the biggest challenges."

Once the teams had conducted all their trips, they had to distill all the information they had gathered into their work on the game world. So they did what all good world designers-turned-historians do: they built maps! By layering information over their map of Ancient Greece, the teams were able to identify how each of Odyssey's seven different biomes could fit the various regions of Greece. However, with a map as big as Odyssey's, seven biomes wasn't necessarily enough variation to make each region feel distinct.

"We used that information to try and inform what was going to happen," says Hall. "For example, in the Peloponnese, we've got Arkadia, which is the big region right in the middle. And it was known for being the wheat fields and the bread basket of the Peloponnese. That's what it actually did. That was its function during historical times. So then, it became super easy for us to say, right, OK, we're going to use that theme for Arkadia. When you go into the city, you see all the different types of animals that are traded and worked on. So we built on those different themes that we researched upfront to give each of the different regions of the world its own flavor."

While each region was developing its own visual identity, they needed to be populated with more than just buildings to feel real. To do this, the team created more than 4,000 unique props in the world. These include things like clay jars, baskets of fruit, ropes, furniture, tents, chests—pretty much all of the man-made objects in the world. With so many props, it would be nearly impossible to place each of them by hand in order to create the dense cities and marketplaces Ancient Greece needed to feel authentic. To get around this time-consuming challenge, the team decided to build individual components that would be already be populated with props, say a table filled with pottery and jewelry or a wagon holding baskets of produce. These individual components could be mixed and matched to fit together to form a cohesive market stall that was unique and didn't require the placement of each individual prop. The team called this system of design, "Lego Kits" because a wide variety of components could fit together in numerous ways.

These "kits" also applied to statues as well, allowing the team to mix and match body parts and heads to create more than 1,000 compartmentalized statues in addition to the 120 unique statues throughout the world. The team was even able to utilize this technique to construct Odyssey's many underground caves, ultimately resulting in a process so intuitive that even someone with no level design experience could build a cave or construct a statue (the team even tested it on producers to make sure).

By building Ancient Greece through historical research, the team ensured that the world felt authentic. However, their goal was never to reconstruct Ancient Greece, their goal was to make a fun game. That meant implementing new and returning gameplay mechanics that could take advantage of the knowledge they had gained and world they had built. For example, with so many tall mountains and steep cliffs, the risk of fall damage could make navigating the world a slow process. As a result, the team decided to make it impossible to die from fall damage, and to eventually give players the ability to leap from the tallest peaks without a scratch.

Mountains weren't the only natural feature to bring about critical gameplay opportunities. Greece is composed of many islands, which means that 60% of Odyssey's map is covered in water. If the team was going to create the seamless open-world adventure they envisioned from the beginning, they knew they would need to allow players to sail from one end of the map to the other. Naturally, this also meant the return of naval warfare, which fit perfectly into the wartime setting.

Speaking of war, Odyssey's time period meant that players would be visiting Greece during the Peloponnesian War. Given the constant conflict between Athens and Sparta during this time, the team was inspired to create bigger battles than ever before, which led to the development of Conquest Battles. Greece's wide-open landscapes and picturesque beaches were a natural setting for massive battles with hundreds of NPCs, with the player acting as the secret weapon for the army of their choice. It's a feature that offered a brand new gameplay experience while at the same time fit right at home in Ancient Greece.

Assassin's Creed Odyssey is the product of more than three years of hard work, culminating in a game featuring a rich, detailed recreation of Ancient Greece. While the development team is proud of the end result, they also understand the value of the process, and the odyssey they undertook to create this game.

"After all, it's not the end result that we are aiming for, it is the journey," says Dansereau. "We're world creators. So we'll always be creating a world somehow, no matter the project. The goal is to have fun while making these worlds. I think that the whole point of working is to enjoy your day-to-day. It's not to reach something at the end. So the fact that we did it while staying friends is probably the thing that makes me the most proud."