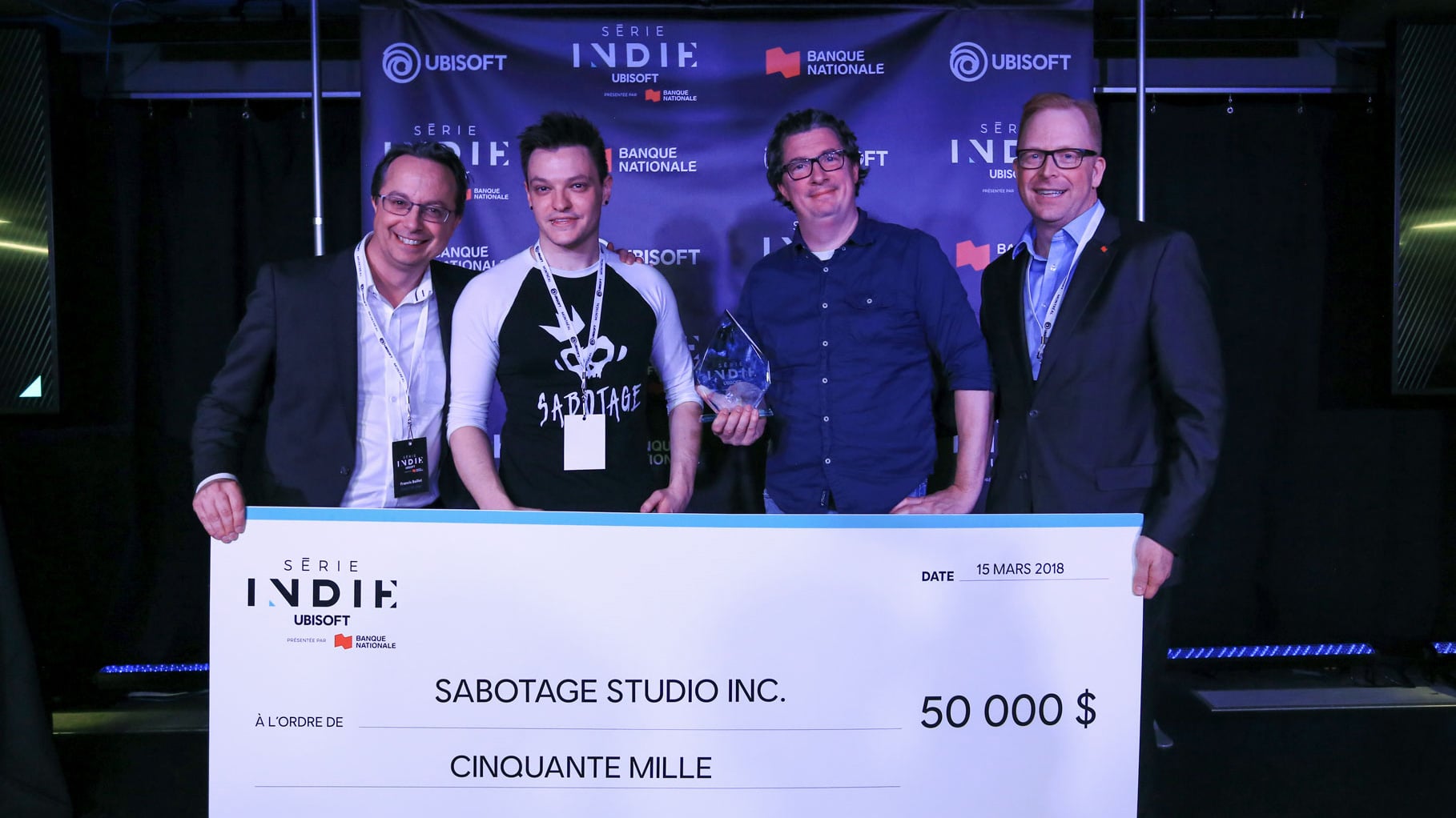 In 2017, Ubisoft launched the Indie Series, a yearly competition open to indie game development studios from Quebec and Ontario, Canada, which includes prize money, mentoring, marketing, creation tools, and financial advice in order to elevate the winning studios and their games' success. The Indie Series is held in collaboration with National Bank and other experts in the industry.

Sabotage Studio won first prize in the 2018 Quebec edition of the Indie Series last spring, and their first game, The Messenger, is out now on Nintendo Switch and PC.

Ninjas, demons, and a side-scrolling, retro aesthetic define The Messenger. Assuming the role of a young ninja threatened by the arrival of a demon army in their village, players will be confronted by convoluted obstacles and deadly enemies to deliver a scroll vital to their clan's survival. Sabotage Studio's co-founders, Martin Brouard and Thierry Boulanger, believe that The Messenger's goofy tone and solid gameplay design makes for a fun and engaging experience.

"Development started in 2016, but the project dates back to primary school" explains Boulanger, creative director of The Messenger. "I grew up in the ‘80s playing NES with my friends. Ninja Gaiden, TMNT; for me, ninjas were always the coolest heroes."

Boulanger's passion for game development was already blossoming during that period of his life. Flash animations for a ninja side-scroller he started making in his childhood became the first sources of inspiration for what was a highly anticipated indie game.

Even as the buzz around the game grows, Sabotage's developers don't take themselves too seriously, and that's reflected in The Messenger's bosses, which – while a challenge to defeat – err on the side of goofiness.

"We wanted to represent parts of a child's relationship with authority through our boss battles," says Boulanger, pointing to one of the game's sillier bosses – a skeletal sorcerer whose imposing cape conceals that he's only two feet tall – as one example. "Authoritarian figures are often seen as ridiculous when we're young. We tend to want to delegitimize them by exaggerating their flaws. Since the idea for the game came to me when I was a child, it was something we wanted to convey in the game. Bosses are still hard to beat, but they're often a bit ridiculous."

Throughout the process, Boulanger and Brouard have aimed for a lighthearted approach to The Messenger's ‘80s-action-game aesthetic. For them, The Messenger is about bringing back concepts that have always been pure fun for players.

"It was important for us not to take ourselves too seriously," Boulanger says. "This gaming style is a bit kitschy and over the top, that's what makes it interesting. We make an agreement with the player to be proud of our nostalgia and just have fun, that's how everyone will have the best experience."

"We were only two people at Sabotage in the summer of 2016," he says. "In January 2017, with other sources of financing, we were able to grow significantly."

The search for talent to develop The Messenger and grow Sabotage as a studio was relatively straightforward. Armed with their address book and more than 10 years of experience in the industry, Boulanger and Brouard focused on recruiting people that shared their passion for the project, prioritizing compatible values and a strong bond between team members in their recruitment criteria in order to build a studio in their image. Two years later, 10 developers and artists had joined forces in Sabotage's offices to create original and engaging gaming experiences.

As for tasks that required more specific skills, the co-founders carefully selected talents that inspired them personally. For example, they reached out to Rainbowdragoneyes, a multi-talented technical death metal drummer from Denver, for the composition of their full chiptune soundtrack (find him on Bandcamp).

Once these talents were mobilized behind the project, the Indie Series gave Sabotage Studio an opportunity to bring some final additions. Notably, the developers had the opportunity to use Ubisoft playtest resources to polish and optimize the game.

Ubisoft is proud to have had the chance to honor Sabotage and The Messenger in the 2018 edition of the Indie Series. The Messenger is out now on Steam and Nintendo Switch.