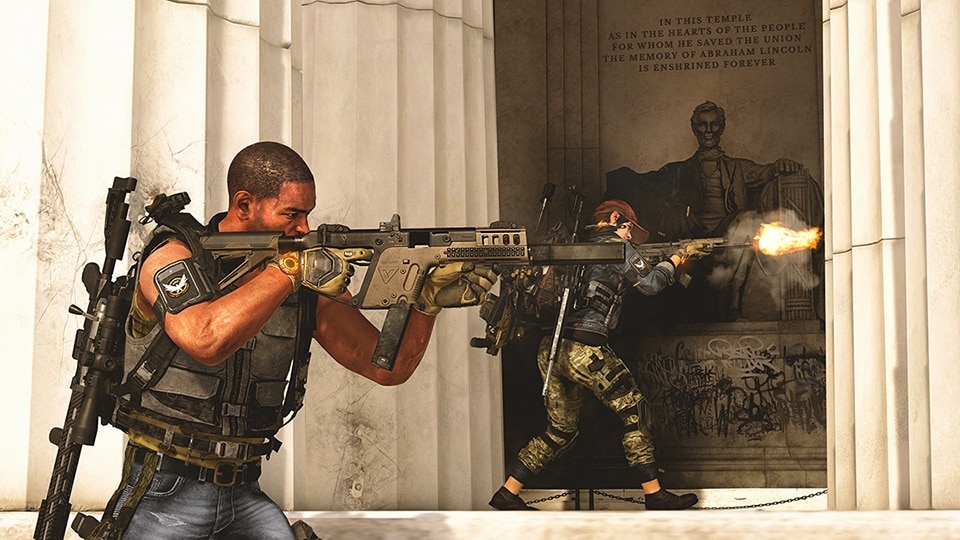 On March 15, players on Xbox One, PC, and PS4 will dive into The Division 2 and fight to reclaim the conflict-ravaged streets of Washington, DC. In the months following launch, the game will be updated regularly with free new missions, challenges, specializations, rewards, and more. While this content will be free for all players, players who want to secure access to it can get the Year 1 Pass, available as a standalone purchase or as part of the Gold and Digital Ultimate Editions of the game.

The free content kicks off with the addition of Tidal Basin, a challenging faction stronghold where the Black Tusks have dug in, and it will be up to you and up to three other players to dig them out. Then, your team size will expand when you take on the franchise's first eight-player raid: Operation Dark Hours. And starting this summer, free major content updates called Episodes will give you and your fellow Agents new ways to test your skills and flex your loadouts. Read on to learn more about Episodes, and to see details on the Year 1 Pass.

From new stories and missions to explore, to new PvP and PvE modes, to entirely new endgame specializations, Episodes will expand the scope of The Division 2. The first one, due this summer, is titled D.C. Outskirts: Expeditions. This episode will take you outside of the city center on two new main missions, and introduce a new game mode in which you investigate the fate of a lost convoy. Episode 2, Pentagon: The Last Castle, will charge you with infiltrating the iconic headquarters and uncovering the secrets it hides when it arrives this fall. And in winter of 2019, Episode 3 will draw the first chapter of The Division 2 to a close, and pave the way for what's to come.

If you own the Year 1 Pass, you will have seven-day early access to all of the Year 1 Episodes listed above. Furthermore, you'll also get early access to eight classified assignments covering the fall of DC, as well as exclusive cosmetic items and additional in-game activities. Finally, the Year 1 Pass will grant instant access to the new Year 1 specializations as they release, giving you the first crack at powerful new signature weapons and their respective skill trees.

The Division 2 is launching on Xbox One, PC, and PS4 on March 15, and players who purchase the Gold or Digital Ultimate editions can get in the game early on March 12. For more on The Division 2, check out our previous coverage.