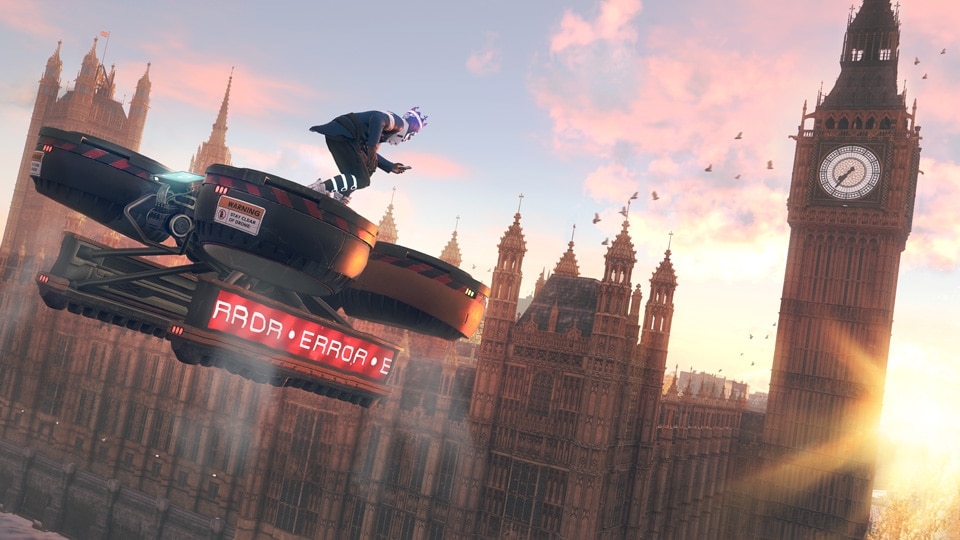 In Watch Dogs: Legion's London, traditional government has all but fallen; a corrupt privatized military corporation called Albion imposes martial law on the civilians, gangs rule back alleys, and there's a surveillance camera for nearly every person. This near-future dystopia is ripe for hacker group DedSec to step in and free the people of London from violent oppression and subjugation. It takes a city to save a city, and in Watch Dogs: Legion you'll be able to recruit from London's entire population, turning them into DedSec operatives and playable characters when it arrives on PS4, Xbox One, PC, and Stadia on March 6.

You don't play as a central protagonist in Watch Dogs: Legion, because every single character you encounter in the open world can be recruited to your cause and become a fully playable character. Each one is unique in appearance, backstory, and combination of gameplay traits, and they'll appear, fully voiced and with their own personality, in all cutscenes.

You can recruit a team full of hacker grandmas if you like, but you're likely better off diversifying your squad based on their unique traits, which provide various boosts and nerfs to particular gameplay attributes. These distinct character attributes aren't decided randomly, but rather are informed by a character's background. For example, a quick scan can reveal that a nearby street performer posing as a human statue is an avid fan of zombie movies, and as a result deals 40% more headshot damage. The amateur boxer walking past might deal 50% more melee damage, while the doctor riding her motorcycle down the street will give your entire team a 25% reduction in healing time. One particularly volatile therapist we recruited dealt 100% more damage, but came with the caveat that they may die randomly at any point. A closer look at their profile reveals that they refuse to visit a doctor to check out their lingering chest pain.

To recruit a character to your cause, you'll need to profile them in the open world to reveal their background information. Add them to your contact list and you'll be able to read in-depth profiles about them, including their personal opinion about DedSec. If a character has a low opinion of DedSec – maybe because of some misinformation they were given about the hacker group – you'll have to raise their opinion before you can even approach them with an offer to join. This is where recruitment missions come in, because in Watch Dogs: Legion, every character is a possible questline.

All characters in Watch Dogs: Legion's open world abide by specific daily schedules. They'll wake up in their apartment, head out into the city, meet up with friends and family, and pursue recreational activities with other characters. They also have their own problems and helping them with those problems is a great way to get them to change their tune about DedSec.

Build Your Own DedSec

Let's say you're hoping to recruit the aforementioned amateur boxer to your team, but she's far too stressed to join DedSec, because Albion has issued an unjust warrant for her arrest. It turns out breaking into New Scotland Yard and erasing their file from the Albion database makes an excellent icebreaker. Depending on a character's initial feelings towards DedSec, you may need to help them out of a few more tricky situations before their DedSec meter will be high enough for you to approach them and find out what they really want. Help them with their final request, and you'll have a shiny new member of the resistance.

This type of recruitment mission is just the tip of the iceberg for what's truly possible. In one scenario, an octopus wrangler who excelled at grappling looked like the ideal member to rise through the ranks of an underground bare-knuckle boxing circuit. The only problem was that his opinion of DedSec was low, due to the fact that his father had been a collateral casualty in a firefight with Albion guards we'd gotten into earlier. Checking his schedule revealed that he visited his newly deceased father's grave before being confronted by a loan shark to whom he was deeply indebted.

Motivated by equal parts guilt and a desire to recruit him, we decided to help him out of his dangerous debt situation. There were many possible ways to wipe his debt: beating up the loan shark and sending him to the hospital would make it impossible for him to collect the money, and outright killing him was always an option, but these routes would likely draw attention and have potentially wide-reaching negative effects.A much subtler way to handle the situation would be to break into the Albion database, put out a warrant for the loan shark's arrest, and make the oppressive military force work to your advantage.

In another scenario, a member of the Kelley Clan gang was harassing a computer scientist who looked prime to fill in a Hacker role we had on our team. Scaring off the gang member would certainly improve the computer scientist's opinion of DedSec, so we decided to confront the harasser. Unfortunately, our prospective recruit caught a stray fist and was sent to the hospital, meaning not only did his opinion on DedSec fall, but he was in no condition to join the resistance from a hospital bed. In an effort to right our wrongs, we hacked into his hospital's database and prioritized his medical care to get him released from the hospital faster so we could start to rebuild his trust in DedSec.

You'll be able to assemble a team of up to 20 DedSec members (though the entire population remains available for you to recruit should you lose operatives or wish to replace them), and recruiting a character doesn't mean they stop being an active participant in the world. Opening up your map will reveal the locations of all your operatives within the open world, and you're free to switch between them at any point, effectively turning them into roaming fast-travel locations (London's famous Underground stations will also act as more conventional fast-travel destinations).

Once you gain a new member of your team, you'll be able to assign them one of three distinct classes – Enforcer, Infiltrator, or Hacker – each of which has a unique skill set. Enforcers can equip heavier weapons like assault rifles and have a shock sticky mine skill. Infiltrators are expert sneakers; everyone in London has mandatory augmented-reality implants, which Infiltrators can hack to cloak themselves or knocked-out enemies. Hackers have access to the Spider Bot, which is great for the operative who doesn't like to get their hands dirty. All classes can perform basic hacking on objects like doors, cars, and cameras, but only Hackers will be able to hijack military drones to use to their advantage.

While you're free to assign any class to any character, their distinct traits are a good indicator of the role for which they're best suited. Take the amateur boxer we recruited: with her buff to melee damage, she excels at taking down enemies in close quarters without firing a weapon, making her a good Infiltrator, as the sneaky class frequently finds themselves in close proximity to enemies.

As you start to take your new operatives out on missions, they'll level up and eventually gain perks that can be used to modify their class-specific skills. This allows you to build an even more diverse team, as operatives within a particular class can have their skills modified differently. Take the Hacker class's Spider Bot, for example; by default, it has two modes – an active mode that allows you to navigate through vents and sneak through locations, and a passive mode in which you throw it out into the world to become a shock turret that stays cloaked until a combat scenario arises. As you level up your Hackers, you can use perks to modify how you use your Spider Bot. One Hacker might augment their bot to use its turret in active mode, neutralizing guards from a distance. Another might use a perk that allows for the deployment of multiple Spider Bots at once, opening up the possibility to place multiple cloaked Spider Bot turrets in a location to surround your enemies and give you a tactical advantage.

Fight To Take Back London

If you prefer to let your fists do the "hacking," Watch Dogs: Legion also boasts a reworked melee system featuring punches, grapples, and dodges, making operatives with melee-boosting traits all the more valuable. In fact, the entire game can be completed using only melee attacks, because enemies will escalate their violence to match yours. If you don't use your guns, enemies won't use theirs, meaning that even if you get caught sneaking, you can dispatch your target without raising the alarms to maintain a stealthy approach. If you feel like taking advantage of the reworked cover-shooting system, but aren't quite comfortable with killing, you can utilize a number of non-lethal guns (which make up about half the game's total arsenal) with four non-lethal ammo types: shock, concussion, gas, and tranquilizer. But be warned, not all enemies carry non-lethal weapons, so if you start shooting them with shock rounds, they may just fire back with deadly force.

Speaking of death, when one of your operatives dies, they're gone for good, so think twice before you engage in a firefight against a small army of Albion officers. While the threat of permadeath is always there, you don't have to worry about completely losing someone instantly in the heat of a firefight. Before they die, a character will be downed, at which point you can decide whether you want to get back up and keep fighting or surrender yourself. Chose the former, and you're playing with your last life; catch one too many bullets or crash through the windshield of a car while trying to make a getaway, and that operative is permanently dead. If you decide to surrender, you'll lose access to that operative while they sit in a jail cell, but you'll be able to take over as another team member and break them out of prison to rejoin your resistance.

If the people of London are going to take back their city from the violent and oppressive ruling bodies, they'll need to join the DedSec resistance, and you'll need to be the one to recruit them when Watch Dogs: Legion launches on March 6.

Stay tuned for more information on Watch Dogs: Legion and updates for all Ubisoft games at E3 2019.