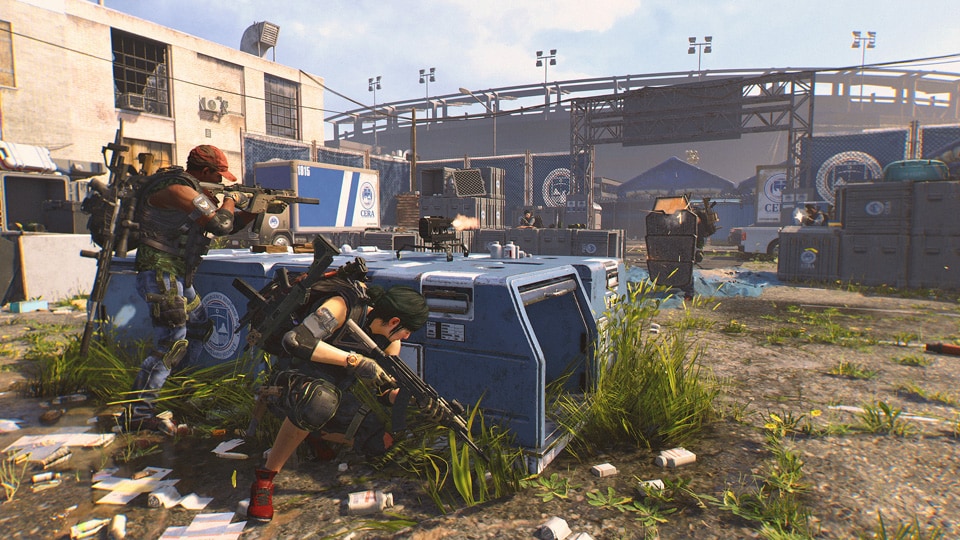 The Division 2 is coming on March 15 and launching with two major avenues for multiplayer. The first is the Dark Zone, or rather, Dark Zones. There are three of these lawless and lucrative hybrid PvE/PvP areas where players can hunt and be hunted by enemy factions and other players. Each claims its own unique neighborhood of Washington, DC, and each has its own stories to tell. Their gameplay dynamics are evolving as well, giving you more ways to go Rogue, and more opportunities to earn valuable loot. The second multiplayer destination is Conflict, where players will face off in fierce organized PvP firefights. We've played both and here's what we've learned so far.

There's a new way to go Rogue for fun and profit in the Dark Zones: become a thief. Break into a locked chest or steal the entire contents of a DZ drop, and you'll earn more loot than you normally would. You'll also be marked Rogue and become vulnerable to attack from your fellow Agents, but your thievery will reveal a hidden signal. Follow it by completing more Rogue actions, and you can eventually unlock a secret entrance to the Thieves' Den, where you'll have access to a special vendor with tempting wares. As a bonus, you'll have your Rogue status cleaned and cleared, so you can resume life as a normal, law-abiding Division Agent. For now.

Some of the gear you loot in the Dark Zones will be contaminated; in order to equip it or sell it, you'll need to head to a designated area, signal for an extraction, wait for the helicopter to arrive, secure your loot to the rope, and then protect it until the helicopter flies away. Extractions are a tempting target for other players looking to go Rogue and rob their fellow Agents, so securing your contaminated loot is always a bit risky. However, in The Division 2, some of the loot you find in a DZ will be clean. That means you can equip it whenever you like and you can't lose it if you die, so your DZ runs will be that much more lucrative.

If a player with powerful gear rolls up on a player with weak gear, the results could be messy. That's where normalization comes in. In The Division 2, most Dark Zones will be normalized, which means all gear and weapon stats are brought within a narrow range, ensuring no one totally outclasses anyone else. So while you can still take your prey down quickly with a clever ambush, you now have a better chance to react, survive, and decide whether to engage or retreat.

Most Dark Zones will be normalized, but some will not. Once you reach the Endgame, Dark Zones will start becoming Occupied for set periods of time. An Occupied Dark Zone is not normalized, so every ounce of juice you can squeeze out of your gear will give you an edge. Furthermore, there are no icons to tell you who's Rogue and who isn't, and friendly fire is always on. Really makes you wonder what sort of loot is in store for players willing to brave those conditions...

Take this short quiz to discover how Rogue you are:

Knowing the four Dark Zone states is essential to living your best Dark Zone life, as is knowing how to clear your Rogue status. Visiting the Thieves' Den, dying and respawning, hacking a Manhunt terminal, or letting your timer expire without performing Rogue actions are reliable ways to get clean. If you want to double down, though, you can sabotage the Manhunt terminal. This will make your Manhunt more difficult, but also more rewarding. Just remember you'll still have to find and access another terminal to lose the Manhunt and get your loot.

If you're having visions of getting jumped by other players immediately upon entering a Dark Zone, fear not. Your first visit to a Dark Zone will be a PvE mission, so you'll only have enemy factions to worry about. These missions give you a chance to learn how that Dark Zone turned dark, and to get to know the lay of the land. For example, one of the DZs began as a depot for shipments of military gear, so be on the lookout for ways to use shipping containers and rail cars to your advantage. Keep an eye on the vegetation as well; Washington, DC is pretty overgrown these days, and the tall grass can obscure your position while you and your teammates stalk your prey.

If you just want to get right into firefights with your fellow Agents, Conflict is the place to do it. This is where you'll find organized PVP, with three custom-made maps and two modes at launch (Skirmish, a team deathmatch in which deaths deplete your teams' respawn tickets; and Domination, a battle for control of strategic points). These fights will be normalized, just like the Dark Zone, and be set up with skill-based matchmaking. Conflict will have its own progression track and rewards, although the opportunity to scare the crap out of other players with explosive crossbow bolts is a reward unto itself.

We're going to learn a lot more about The Division 2 in the lead-up to launch on March 15 on PS4, Xbox One, and PC. Pre-order now to guarantee access to the private beta, or register at thedivisiongame.com/beta for a chance to get in. For more on The Division 2, check out our previous coverage.