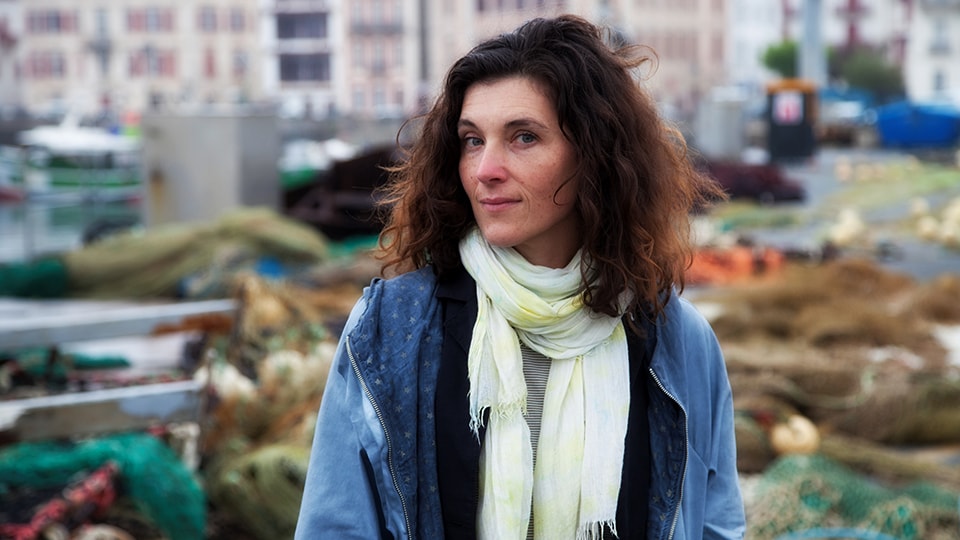 Beyond Good and Evil 2 is a huge game that takes place across a massive star system, where cities are built into the sky, human-animal hybrids are commonplace, and statues of Hindu deities can be seen from space. It takes a great deal of creativity to craft the world of Beyond Good and Evil 2, but it's a challenge that Lead Artist Salomé Strappazzon relishes.

The daughter of a painter and child psychologist, Salomé Strappazzon grew up in a small village in the south of France. Following in the footsteps of her father, she spent much of her childhood outside drawing and crafting tiny worlds in her sketchbook. Despite the artistic influence on her life, Salomé Strappazzon decided to study electrical engineering and data processing at university. After graduation, she began working as an electrical technician at a telecom company before realizing she wanted to pursue a career that fit her passion for art. Seven years later, Salomé Strappazzon joined the team at Ubisoft Montreal before moving to Ubisoft Bordeaux to work on Beyond Good and Evil 2 as lead environments artist.

How did you go from working as an electrical technician to a videogame artist?

Salomé Strappazzon: About 20 years ago I was fortunate enough to meet an art director at [French videogame developer] Kalisto. After speaking with him, I realized that with my technical knowledge and my interest in drawing, I could have a job in videogames. Most videogame professionals were self-educated at the time, so most knowledge and skills were just taught from person to person. He told me, "If you want to learn, you just have to bring your computer to the company, and we'll install 3DS MAX on for you and we'll teach you a bit." Well, I didn't own a computer at the time, so my stepfather gave me one. I carried it into Kalisto's office, gave it to the technician, and while they were installing 3DS MAX, I was showing my drawings to the art director. He told me they looked very promising, and to go home with my computer and start learning 3DS MAX by myself.

Unfortunately, by the time I was proficient in the software, Kalisto had gone under. So I took my portfolio and applied elsewhere, and eventually got a job working at Darkworks in Paris in 2000. But it was all due to the nice people I met at Kalisto.

**Why didn't you pursue a career in art earlier? **

SS: I've drawn my entire life. My father was a painter, so it was something we used to do at home. I never studied it in school. I probably would've liked it, but I saw that it was difficult for my father, and I figured I'd never be able to find a job as an artist. It felt like you were either a devoted painter, or you weren't an artist. My father didn't have another job; he was always painting, and it was very difficult for him. I wasn't able to imagine having that future, or any future tied to art. I thought becoming an engineer would be more stable, but I realized very quickly that it wasn't for me.

"My mother is a real feminist, so I grew up in a family where everything was possible for a woman."

**If you realized that your previous job wasn't for you, what made you realize that working in videogames was for you? **

SS: I never really realized it, because I never played videogames. What changed for me was understanding that I could mix my love for drawing with my knowledge for technical fields. I realized that I could take my degree and combine it with my hobby. I found a way to make a living with what I wanted to do. The atmosphere and the process of making a game was so much more appealing to me. I could have a creative and stable career that I had previously thought didn't exist.

SS: Well, it's different for every game, but as a lead artist on Beyond Good and Evil 2, I work closely with the art director to ensure that the art direction wanted is going to be feasible, and also to communicate the direction to the artists. The goal is to make the art direction shine in the environments of the game. I also work very closely with the technical and programming teams to make sure that our artistic productions respect their technical restrictions, and challenge them when we need new tools and innovation to achieve the artistic goal.

The ultimate goal of the job is to have a game with an inspired and original art direction. I know I've done a good job when I can look back at the work we've done and know that all of us are better artists now than when we began, and that the tools we're using have improved because the technical teams have helped us fulfill our vision.

What qualities are important to become a lead artist?

SS: I think experience is very important, because you really have to know how we make games, the different phases of a production, the different roles involved in the production. As an artist, it's very important to have an eye, to know exactly when – artistically speaking – the goal is reached. And as a team leader and key member in producing a game, you have to know the priorities at any step of the production.

Art directors want everything to be perfect, and you already know by experience that perfection is not possible. The lead artist is meant to be challenged by art direction during the conception phase, but it's also our role as lead artist to know where you have to push the quality.

Also, a really important quality is an attention and concern for the job being done well. It's not just about the result; for a lead artist, the process is also really important. Curiosity, open-mindedness, and flexibility are important too, because in videogame design, everything is changing all the time, and you have to be able change your habits and production process!

"The atmosphere and the process of making a game was so much more appealing to me. I could have a creative and stable career that I had previously thought didn't exist."

**How does someone become a lead artist? **

SS: There's no one way to go about it, but to become a lead artist, it's important to first work for several years as an artist in videogames. It also helps to have a multifaceted knowledge base so that you can work with other teams on a deeper level, not just superficially. Share your knowledge, communicate with all of the team, not just the artists. You have to really understand the roles of everyone in production.

**Beyond Good and Evil 2 is such a large game that anything feels possible. For a lead artist, is that a dream come true or a daunting task? **

SS: It's very challenging, but it's such a great opportunity, because the team is very creative and there's so much opportunity to learn. I'm really happy to be a part of it. I've loved all the projects I've worked on in my career, but this one feels like a very unique challenge because it's such a big universe.

**Videogames have changed a lot in the 20 years since you joined the industry. How has the culture of game development changed in that time? **

SS: My mother is a real feminist, so I grew up in a family where everything was possible for a woman. It was just obvious for our family, so it wasn't something I was fighting to achieve. I didn't really ask myself the question, "Are videogames for me?" because I am a woman. I always felt like I was welcome, but I have noticed that things have changed.

When I first started in videogames, there would be a tendency for men to behave more paternally towards their women colleagues, but many of us were very young and learning. I have to say, even if I never really encountered any obvious differences between men and women, I think advancement in our industry is still slower for women than for men. I think it's something that will only improve as more and more women begin working in game production.