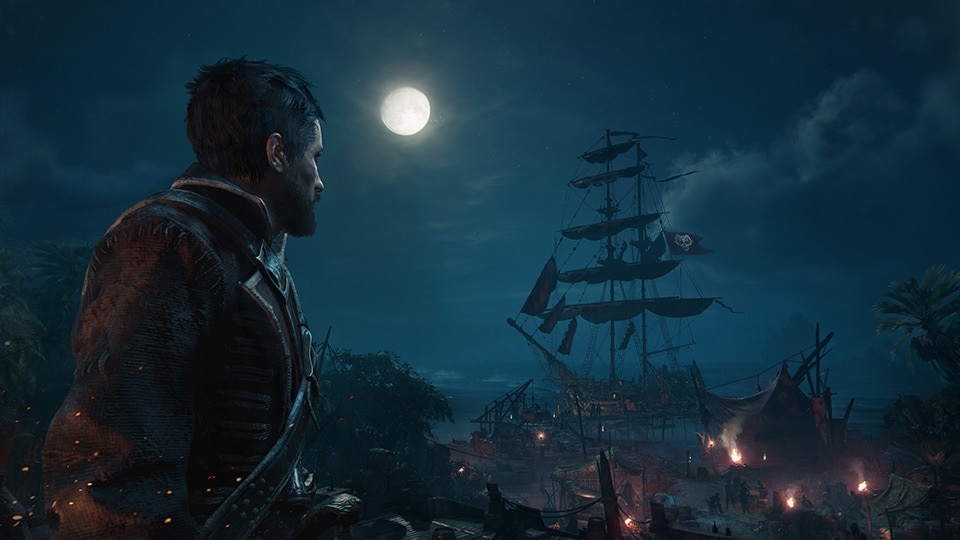 This year at E3 2018, the Skull & Bones team is showing off the heart of their shared world pirate fantasy, Hunting Grounds. While last year focused on Disputed Waters, an intense five-versus-five competitive mode, Hunting Ground is where players – particularly those who prefer a solo or co-op experience – will likely spend a majority of their time when Skull & Bones launches on PS4, Xbox One, and PC in 2019.

Our demo gave us just a taste of all the splendor (and loot) that Hunting Grounds has to offer. As we began, we were greeted by three upstart pirate captains. With piracy eradicated in the Caribbean, Skull & Bones' captains have refused the King's pardon, and ventured into the Indian Ocean to continue their pillaging among the world's most lucrative trade routes. Next, we were introduced to Taljheed, an Indian mystic fortune teller who's truly gifted with foresight. Taljheed predicts Fortunes that will guide your experiences in Hunting Grounds and give you a leg up on the competition. The world of Skull & Bones is systemic and ever-changing, and the Fortunes reveal these world changes, giving insights into weather, conflicts, and even upcoming cataclysms. Knowing the state of the world you're about to venture out into will be a huge advantage that will help you decided which fights to pick, which allegiances to make, and how you'll approach each encounter.

The team showcased two Fortunes this year, Favorable Winds and Hostile Takeover. The former means more merchant with precious cargo will be out on the ocean, taking advantage of the fast-moving trade winds. It's an opportune time for pirates to plunder these wealthy vessels. The latter Fortune, Hostile Takeover, means that the seas will be populated with heavy warships, limiting trade. While trade commodities may be scarce, those brave enough to risk battle will be rewarded with rare treasures. These are only two of the many Fortunes that will be included in Skull & Bones.

With our Fortunes foretold (we were blessed with Favorable Winds), nothing was left except to choose our flagships and set out into open waters. While we were only given access to three of the many ships that will be in the full game, our small sample – The Jaeger, The Black Horn, and The Royal Fortune – provided quite a bit of diversity. A smaller, more agile ship, The Jaeger came equipped with a powerful front cannon, making it perfect for pursuing fleeing ships, while its agility makes it great for positioning mid-conflict. The Black Horn was more of an all-rounder, specializing in close quarters combat thanks to its absolutely devastating battering ram. A single, well-placed ram charge can essentially one-shot all but the strongest battleships. The final ship, The Royal Fortune, is a tank on water. The slow-moving juggernaut is capable of anchoring mid-battle and launching an infinite volley of broadside cannon fire for a short time. What it lacks in speed and mobility, it makes up for with sheer durability, with a hull that's able to take 50% more damage than either of the other ships before sinking.

As we set out into the Hunting Grounds, we were given various objectives: loot 15 crates of ivory, board a particular merchant ship, discover this buried treasure. While you can tackle any of these activities, they're by no means required. If you like, you're welcome to take to your crow's nest and look through your spyglass to scout out surrounding merchant and military vessels. Looking at a ship through your spyglass will reveal important information like the ship's strength and its cargo, helping you decided if the risk is worth the reward.

Of course, Hunting Grounds is a shared world, which means you're likely to encounter other players sailing the high seas. When you encounter another player, you have three options: ignore each other and be on your way, team up to form a pirate gang and battle ships too formidable for any one crew (there is no friendly fire when teaming up), or give in to your pirate instincts and attempt to take them out and steal all their loot.

No matter what activities you decide to partake in, what becomes immediately apparent is just how important positioning your ship is in Skull & Bones. Taking advantage of the ever-changing winds can mean the difference between a rich bounty or a watery grave on the ocean floor. Sail with the winds, and you'll be able to close the gap on that juicy merchant ship in no time. Find yourself facing an intense headwind – especially in the middle of a fight – and you're practically a sitting duck.

What's more, each ship's strengths depend on its positioning. For example, front cannons – when fired at sails – are particularly effective at slowing enemies down, which makes The Jaeger's souped-up front cannons, which can be briefly augmented to fire multiple shots at once for a short-but-devastating barrage, the most useful tool in tracking down fast-fleeing ships. Similarly, cannon ammo operates on a cooldown timer, meaning if you get caught up in a firing frenzy, you can quickly deplete your ammo and need to wait for it to replenish. Luckily, when your front cannon reserves are empty, you can rely on your broadsides to get the job done. This is where The Jaeger's agility comes into play, as it can easily reposition to make the best use of its weapons.

By contrast, The Royal Fortune's ability to drop anchor and launch an overwhelming salvo means that you'll be defenseless for a short time. Deciding to use this ability with low health or while being flanked by ships on either side can be a fatal error, even with all that extra armor. Meanwhile, the Black Horn's battering ram entices you to get up close and personal with your enemies. Because the damage your ram causes is directly affected by your speed and direction relative to your enemies', it's important to utilize the winds at your back to get the strongest charge possible. Take caution, however, because just like The Royal Fortune's ability can leave you vulnerable, so too can The Black Horn's ram. Trigger the ability from too far away, or misjudge your target's trajectory, and you can completely miss, wasting your ability and sacrificing your positioning. Because of this, it's best to wait to trigger the battering ram until contact is certain.

The importance of positioning also comes into play when you attempt to repair your ship during a battle. While you repair, you won't be able to move, so you'll be vulnerable for a short time. One shot landed on your vessel will cancel the repair sequence, leaving you with one less repair kit and a heavily damaged ship. This requires you to pay close attention to your enemies' positioning as well. If they're facing away from you or attempting to turn, they won't be able to attack for a short time, giving you a window to repair your flagship.

When you're not in battle, you're free to roam the Indian Ocean looking for treasure and ways to get the drop on prospective prey. Find a derelict ship, and you'll have the option of using it to repair your vessel, looting its cargo, or using its materials to craft a disguise for yourself. Looking like a pirate ship might cause merchant ships to flee and military vessels to attack on sight, but they'll be much more welcoming if they think you're one of their own. This opens up a wealth of tactical possibilities. Perhaps you'll use cover to sneakily approach a Portuguese frigate before activating your ram at the last second to deal a crushing blow by surprise. Or maybe you'll masquerade as a deadly pirate hunter, and fight alongside them to take down another player's ship before revealing yourself to capture all the stolen loot.

While the promise of wealth and treasure are always on the horizon in Hunting Grounds, be careful, because enemies can board or sink your ship if you take too much damage. If that happens, you'll lose all the loot you've gained. Of course, treasure is useless without something to spend it on. Nearly every aspect of your ship and captain can be customized and upgraded, so you'll not only look intimidating, but have the strength and firepower to back it up.

For more on Skull & Bones, check out our previous coverage. And be sure to head to stay up to date on all our E3 news.