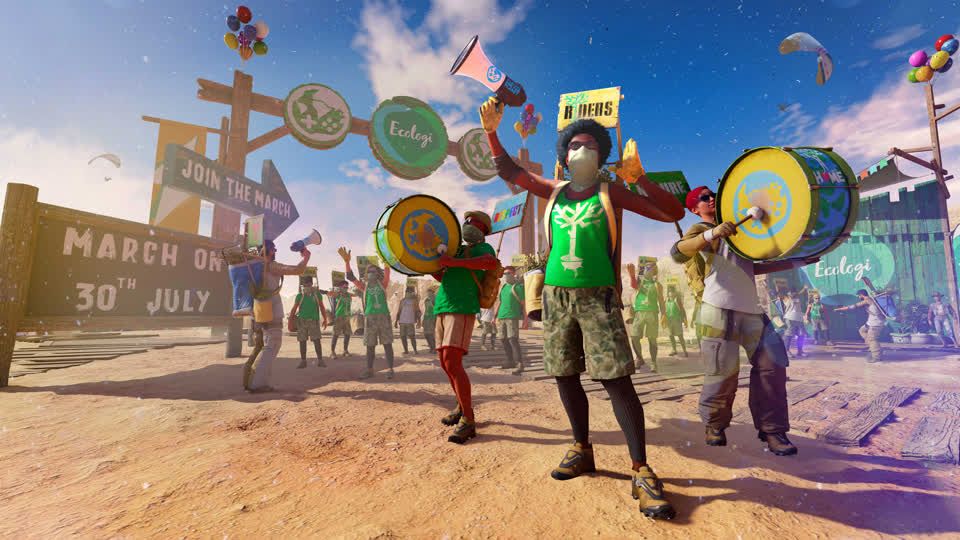 When the Riders Republic team attended the Green Game Jam in 2021, they had no idea it would lead them to create Riders Republic Rebirth, a first-of-its-kind in-game event. The Green Game Jam, hosted by the Playing for the Planet Alliance, is an annual event aiming to bring together video game creatives to discuss new ways to inspire players to take action for the climate. Each year’s Green Game Jam has a theme, and 2021’s event was centered around conserving and restoring forests and oceans.

Boris Maniora, Riders Republic’s gameplay director, was instantly inspired by the passionate stories he heard from attending roundtables and lectures during the Green Game Jam. “It's a very collaborative space where we can openly pitch ideas to each other and gather constructive feedback. It’s amazing to be a part of this effort,” says Maniora. He knew Riders Republic was the perfect platform to create and facilitate social change and began to craft the idea of the Rebirth activation with the rest of his team as part of their pitch.

Now, that Green Game Jam pitch has become a reality: Riders Republic Rebirth will be a two-week-long event, culminating with an in-game Climate March – the first ever to take place in a video game. For the event, Maniora’s team worked to modify an in-game location, create a new base camp and race event, and provide creative ways for players to express themselves during the Climate March. The Rebirth event will center around the concept of digital reforestation – players will work to plant trees in a dedicated area of the map and create a new forested area in Riders Republic even after the event ends.

We met with Maniora and Manfred Neber, lead game designer, and asked them about the Rebirth activation, the in-game Climate March, and their experience participating in the Green Game Jam and bringing their pitches to life. 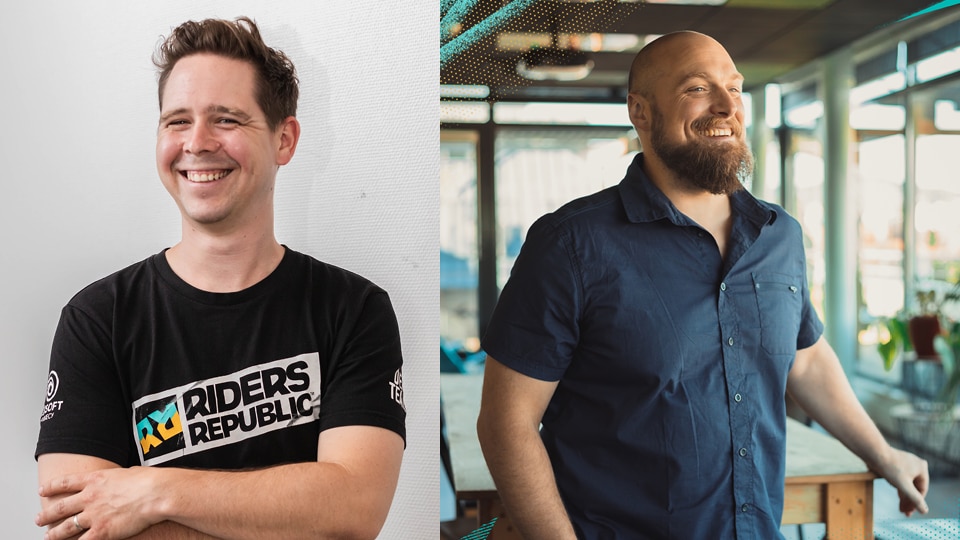 How did your team create and bring to life the idea for Riders Republic Rebirthand the in-game Climate March?

Boris Maniora: We created the idea for Rebirth during the 2021 Green Game Jam; Riders Republic is already set in a very nature-oriented space - our games feature the amazing redwood trees of several national parks in the United States, so Rebirth seemed like a natural fit for us.

Manfred Neber: I received the original pitch for Rebirth and helped the idea come to life. We worked together to create the two-week event and work out the details of hosting this one-of-a-kind gathering. We wanted to make sure the event helped players achieve a feeling of community and celebrate coming together for the good of the planet. I also worked closely with our Social Cell team, which hosts Riders Republic weekly live programs, to integrate this activation into the game's calendar.

What were the challenges in preparing Riders Republic to host the in-game Climate March? Were any modifications required to facilitate this event?

BM: Half of the map of Riders Republic is forested, so we knew that reforestation would be a powerful activation topic for us. We had several weeks of brainstorming sessions and workshops to ensure the pitch covered what we wanted to say about climate change in a powerful yet respectful way. We pitched the idea to interested Riders Republic team members, so we knew we would have a passionate team ready to create the activation. In fact, a lot of the collaborative work was completed during one of France’s COVID lockdowns, so all brainstorming happened online. In the end, the lockdown gave us the idea to focus on an in-game march because we weren't allowed to gather together in person.

MN: We also wanted to ensure that we treated the topic of climate change with the power and respect it deserves. Something we love about Riders Republic is that it allows and encourages players to be goofy. With the Rebirth event, we wanted to find a balance in creating a fun event for players to come together while remembering the overall goal of this powerful initiative. We also wanted to facilitate a space for players to come together, and that brought along the creation of the Rebirth Base Camp, which is the headquarters for our event. Here, players can socialize and interact in new ways in the game. It's not just one voice - it's the voice of a community.

What can players expect to experience during the march in terms of gameplay?

MN: One of our goals was providing players freedom of expression during the march, both audibly and visually. First, we're providing two Rebirth-specific emotes players can use as they move about the space. Players can activate a Rebirth drum and Rebirth megaphone to show their support for the march and discover creative ways to use these tools to interact with the environment. Players can also access special in-game banners that will attach to their characters' backpacks. Each will have a special message and will interplay with each other during the Rebirth event.

Finally, special outfits will be available for players who complete the march, which can be worn in the game even after the event. Players will still be able to keep their customized face, hair, and helmet during the event, but we hope the outfits will spark a sense of unity among players and demonstrate that everyone is working in support of the same cause. More than anything, we want players to use this opportunity to come together and have fun in the name of social change.

BM: One of the events will encourage players to collect seeds to plant trees in the game. Not only is this a fun way to have players think about climate change, but also the trees grown during Rebirth will remain in Riders Republic even after the event! It's things like the creation of a permanent new forest that we hope will encourage players to join and will serve as a reminder of the power of our community. We're also focused on ensuring the event is fun for players - it's a video game after all. Including the emotes, banners, and costumes, we have several fun activities planned for participants during the march.

MN: That's exactly what we want to do. It's a march, so it's not something with a set goal or activity you need to complete. This event is for the players, as members of the Republic, to express themselves, so we wanted to create outlets to facilitate that. We're also hosting a mass race for the event called Desert Bloom. The first week will begin in the desert section of the track, and the second week, the race will be hosted in the same, newly revitalized forest area.

BM: We hope the idea of the Climate March sparks a desire to host more online demonstrations in the future. Video games provide the opportunity to create a collaborative and interactive means for marching together in a way that hasn't really been done before. I think the best aspect of the entire Rebirth activation is that it's a social gathering, and that gives players the potential to use video games as a real platform for creating change in the real world. 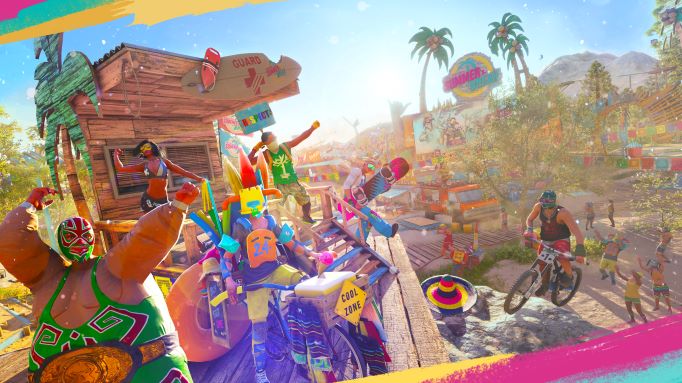 What can players expect after the march and Rebirth event have finished?

BM: We're partnering with Ecologi, a social enterprise, to plant trees in the real world following the event, so players can see the impacts of the efforts even off-screen. We also hope players experience the power of video games and the video game community. In video games, we're able to see the results of our hard work almost instantly, and this has an emotional impact on players in the real world. We also hope players finish this event feeling more confident in themselves and in sharing their voices with the world. The Climate March allows for a great level of immersion and community gathering, so we really hope these really inspire players to become active in their local communities. It's all about the bigger picture!

You also won the Media's Choice Award at this year's Green Game Jam for your new activation, titled "Phoenix." Congratulations! Can you say a few words about this future project?

BM: Thank you! The Phoenix activation will be centered around an increasing number of wildfires worldwide as a result of climate change. Like Rebirth, Phoenix will also be a live event. We want to create an even more immersive player experience the second time around. We will again feature changes to the Riders Republic map; this time, we'll include air pollution and an orange sky as a result of the fires. Additionally, players will receive a mask to wear in-game as they participate in the activation.  And, just like real-world wildfires can happen without warning and catch people by surprise, we won't reveal when this activation will take place. One day, players will log on to the game and find that there are fires threatening the forests in the world of Riders Republic.

Players can join in on the two-week Rebirth event beginning on July 30! Riders Republic is available now on Xbox Series X|S, Xbox One, PS5, PS4, Stadia, Amazon Luna, and PC, and is included with a Ubisoft+ subscription.

Discover even more Ubisoft green initiatives and Ubisoft's commitment to continue climate-neutral initiatives in the future.