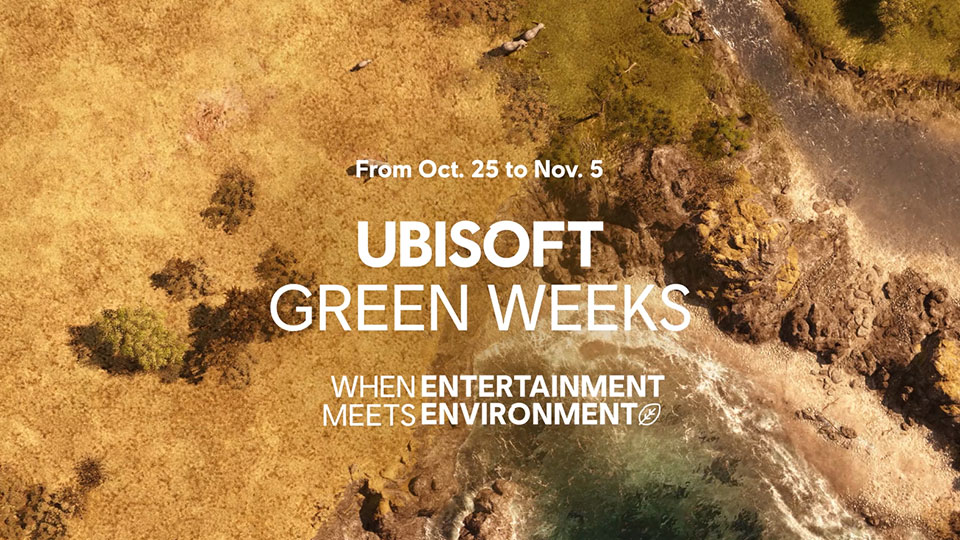 How Ubisoft Is Inspiring Teams To Go More Green

Climate change is a topic that affects every one of us, and Ubisoft believes strongly that videogames are a perfect platform to help spread awareness and inspire action amongst its many players. As part of its recent internal Green Weeks event, Ubisoft held a series of eight digital conferences and roundtables on the positive impact that games can have, with the goal of inspiring and educating teams across the company to adopt ecological practices and create games with green messages, while also considering sustainability in their everyday life at work.

The theme of this year’s event was “When Entertainment Meets Environment,” a nod to how integrating environmental themes in games can inspire players to act to protect the climate. Many developers at Ubisoft are already well-aware of the role that games can play, with five Ubisoft teams participating in Playing for the Planet’s Green Game Jam 2021 to create new in-game content about the conservation and restoration of forests and oceans. The goal of Green Weeks was to give teams worldwide an opportunity to learn from the experiences of the Green Game Jam, as well as experts from industry leaders like Microsoft and Sony, to take Ubisoft’s sustainability game to the next level.

One of the conferences, titled “Tackling the Environmental Challenge in Ubisoft Games: The Climate Game Toolkit,” brought together six speakers from across Ubisoft’s production teams to discuss the unique power of games to mobilize players around climate change. They highlighted that, unlike books and films, games turn players into actors who propel the story forward and make choices that can impact the game world around them. In Anno 1800’s prize-winning Green Game Jam mode, for example, players see the impact of unsustainable practices on their settlements, with negative actions leading to infertile land and diminished supplies. Players can then learn from their mistakes and start over in a more environmentally friendly way. Whether through game mechanics, narrative, setting or theme, games can bring sometimes-abstract or distant-feeling environmental issues to life.

But it’s not just about developers. “Every job must be a climate job, every single person has a role to play,” says Nicolas Hunsinger, director of corporate environmental sustainability. In addition to sharing best practices and inspiration for green games, Green Weeks also featured updates on Ubisoft’s Play Green Commitment and information about ways for all employees – regardless of their job description – to get involved.

Green Committees at Ubisoft – employee-led groups that put together educational events for their colleagues – lead initiatives to promote recycling and cutting down on single-use plastic, and participate in activities like last year’s Climate Fresco. Ubisoft also offers online training to team members worldwide so they can learn more about sustainability and how they can make their job a climate-friendly job. The Climate School training explains global warming and its causes, lays out the stakes of inaction, and provides specific insights and advice to employees based on their role, whether they work in IT, purchasing, finance or legal, with more to come.

Through either the games they create or sustainable practices at work, Ubisoft’s teams are acting to combat climate change. Hunsinger closed the Green Weeks series on an inspirational note: “As an entertainment leader, we have a great deal of power to drive change, more than we might imagine as individuals. We launched Play Green one year ago to reduce the carbon emissions of our own operations, contribute to climate causes, and raise the awareness of our players through our games. Entertainment has the power to change the world, and it is our responsibility to be a part of that change.”

Check out our previous coverage of green initiatives at Ubisoft, and keep your eyes on the Ubisoft News hub for more news and information.