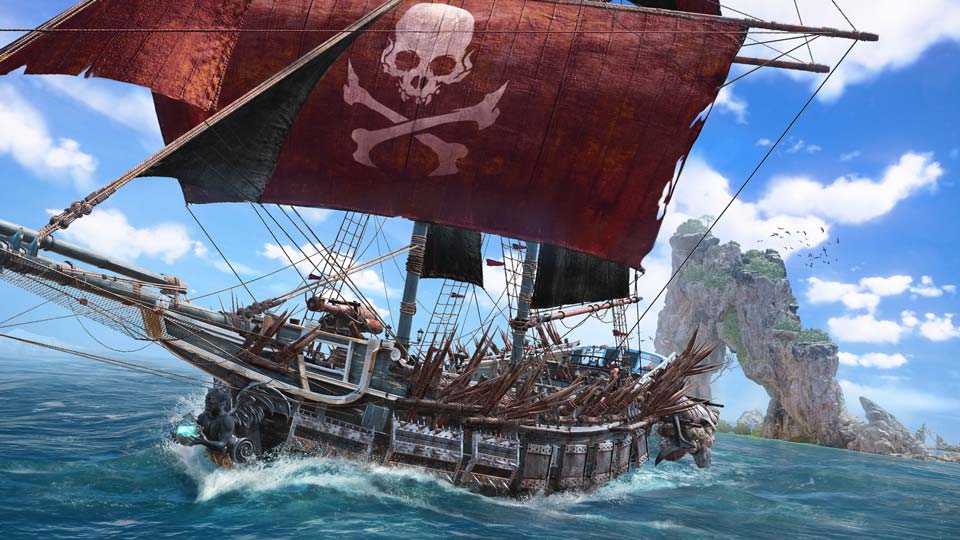 Skull and Bones is set to launch November 8 on Xbox Series X|S, PS5, Windows PC through the Epic Games Store and Ubisoft Store, Stadia, and Amazon Luna. Set in the Indian Ocean at the end of the 17th century, during the Golden Age of Piracy, Skull and Bones invites players to forge their own destiny and live their ultimate pirate fantasy - if they have what it takes to survive. In an open world spanning the African coasts to the islands of the East Indies, Skull and Bones challenges players with rough seas, deadly wildlife, and, of course, enemy ships.

Players will start with naught but their wits and a rickety little sailboat. As they gather resources, they'll unlock blueprints that will let them craft new and bigger ships, upgrades, weapons, and tools, all of which are essential for growing their reputations and expanding their piratical possibilities. To further build their fleet and gain access to even more resources and upgrades, players must grow their Infamy by completing contracts from vendors, local factions, and kingpins throughout the world. Players can also identify new opportunities by scouting the seas with captain's tools such as the spyglass, which can spot trade routes and wealthy merchant ships, or scope out enemy weaknesses for the best plan of attack.

Naval combat is a core feature of Skull and Bones, and you'll be able to customize your approach depending on your preferred playstyle. There are 12 different ship options in the game, each with different stats for speed, capacity, and hit points. Additionally, each ship has unique perks that further allow players to customize their experience. Ships can be equipped with armor and a number of deadly weapons, like cannons, mortars, ballistae, torpedoes, and more.

Skull and Bones is available for pre-order on the Ubisoft Store for Xbox Series X|S, PS5, and Windows PC, and is offering free shipping to most locations on physical copies of the game. Pre-order worry-free thanks to our simplified refund policy which allows you to request a refund at any time before the release of the game. The standard 14-day/2-hour refund period also applies, starting on the game's release date. Ubisoft+ subscribers will get Day One access to the Premium edition starting at midnight on November 8.

Skull and Bones is playable solo, or in co-op with up to two friends. Skull and Bones has plans for new seasons post-launch, each bringing new contracts, content, and challenges. Do you have what it takes to become an infamous pirate? Find out on November 8, when Skull and Bones launches on Xbox Series X|S, PS5, Windows PC through the Epic Games Store and Ubisoft Store, Stadia, and Amazon Luna. Long live piracy!