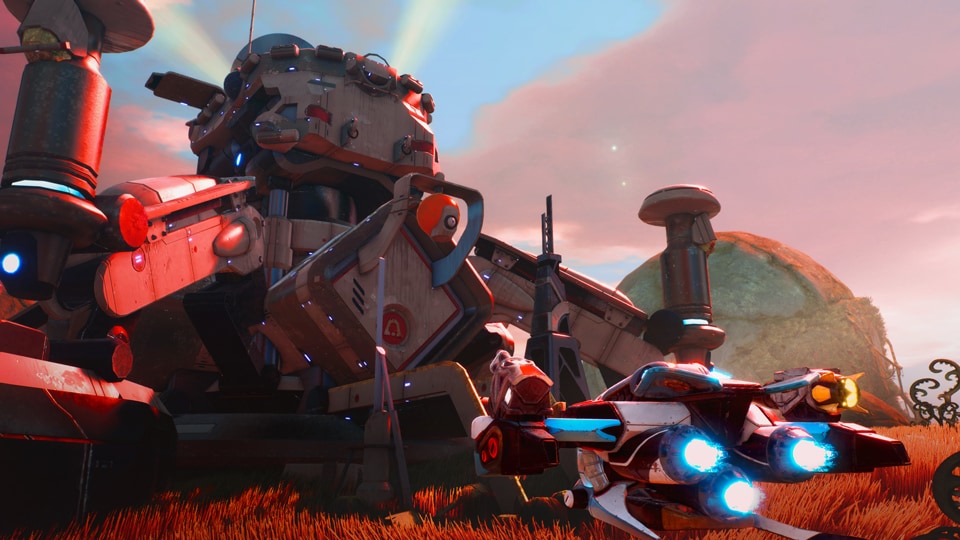 How A Small Studio Mentality Led To The Creation of Starlink: Battle for Atlas

There's a myth that creativity is a sudden spark that inspires masterpieces. In reality, the creative process is just that: a process, one that can take thousands of iterations and even more hours in order to make something worthwhile. Matthew Rose, producer on Starlink: Battle for Atlas – the upcoming open-world, outer-space adventure – understands this process well.

Nearly five years ago, after the release of Splinter Cell: Blacklist, Rose and a small team at Ubisoft Toronto split off to work on a new project. The eight developers received a mandate from Ubisoft HQ that essentially asked them to "create something new," with no rules, no guides, and no restrictions.

"It was an incredibly liberating mandate," says Rose. "Initially, I thought this was my dream assignment. But the more we started thinking about it, the more we realized it's also an incredibly terrifying mandate." Without any constraints, Rose and his team were unsure where to go, where to look, and what to build. Little did Rose and his team know, this "terrifying mandate" would grow into a huge, persistent game where physical replicas of in-game spaceships attach to controllers and include swappable components that are reflected in-game.

Undaunted, the team of two artists, two programmers, two game designers, an animator, and Rose himself embraced the challenge. "We were kind of the isle of misfits," says Rose. "When presented with the option of working on the next big entry in an established franchise or the option of charging into the unknown on a tiny little thing, these were the people that chose the unknown." To come up with something new, the team had to embrace a different culture, one that Rose likens to a game jam.

Turning a concept into a playable demo is a difficult task for any studio, let alone eight people. To aid the process, Rose identified and sought to fix some collaborative design issues. First, the team reimagined brainstorming. Since it's almost impossible to be creative without constraints, Rose presented the team with a series of guiding questions: What game would you create where the primary mechanic is collaboration? What E for Everyone game would you make with 10,000 simultaneous characters? What game could you make that would evoke a sense of wonder and discovery?

Then, instead of all crowding into a room and discussing openly ¬– which often results in only the loudest ideas being heard – each member of the team was tasked with coming up with 25 concepts for a game by themselves. "This is way harder than it sounds," says Rose. "25 doesn't sound like a big number, but it's incredibly difficult." Once each team member had 25 ideas, they were paired up and asked to come up with 75 ideas together. This process was repeated two more times until all eight developers had together come up with more than 300 ideas for a game.

With more than 300 ideas in hand, the team boiled them down. Each team member was responsible for taking what inspired them from the discussions, and building three different pitches about their new idea to present to the rest of the team.

"This generated an immense amount of some of the most excited pitches I've ever seen," says Rose.

Once all the pitches were completed, the team voted for their favorites. The top three ideas turned into prototypes that were built in one week. "We had eight people, two programmers, and we were making three prototypes simultaneously, so everyone on the team had to stretch and work in every discipline. I firmly believe that was a massive component," says Rose. After a week of creating, the three teams came together to show off their games, sometimes going as far as creating paper prototypes and acting out certain actions or situations they were unable to show otherwise.

Following multiple iterations of what were essentially two-week-long game jams, one prototype stood out above the rest. It let you pilot a spaceship and grab and throw asteroids with a tractor beam. The prototype controlled with what was essentially a Wii remote hooked up to a consumer electronics board, and had a fair amount of copper wire sticking out.

"We started showing it to people, and there was just something wonderful and magical about it," says Rose.

The team refined their design, and created a second version of their custom spaceship controller. After overwhelmingly positive reactions from focus tests, Rose flew to Paris to pitch the game to Ubisoft HQ.

"They loved the process, they loved the game, and it got greenlit," says Rose. "We were feeling amazing, we felt totally vindicated. The reinvention of this process totally worked."

Returning to the studio, the team began to expand and ramp up production. They built a third version of the controller prototype, and started fleshing out the game that would go along with it. They eventually returned to Paris to provide an update on their progress – but this time around, the trip was a bit more sobering. Rose realized that in their excitement to innovate and create something brand new, they had perhaps overlooked some things. Creating a custom controller was inefficient at best, and the team hadn't seriously considered the practicalities of their engine, play structure, player engagement, and play time.

"We were at a bit of an impasse," says Rose. "We were confronted with these problems, and we decided to innovate our way out of them." Instead of creating a custom controller, the team created a series of spaceships that connected to the controller and spoke wirelessly to the console. The old engine was dropped in favor of Ubisoft's shiny new Snowdrop engine. The game's structure and world were also entirely reimagined, enabling players to seamlessly travel from planet to planet and choose which factions and conflicts they wanted to confront in a persistent world.

"While we conceived of all these great fixes and exciting features, the problem was putting them together and actually executing them so that the whole was greater than the sum of its parts," says Rose. "We were not on a path to ship, and I began to question the efficacy of this game jam process, which had been so successful in the early stages." Rose and his small team were in many ways like an indie studio, and like many indie studios, they encountered a fair share of problems on the path to shipping their game.

Fortunately for the team, this is where having a publisher like Ubisoft behind you can really help. "I see a lot big studios struggling with conception, and I see a lot of indie studios struggling with shipping a game, but we were really able to leverage both sides of the equation," says Rose. "We had the structure and the power that a company like Ubisoft has in place, and access to the people that are really able to help you realize that dream and that vision."

Starlink's development was something of a balancing act. With the freedom to sculpt their vision, and the structure and support from Ubisoft, the project was able to grow and mature naturally. "I like to think of it as protecting a flame," says Rose. "Early on, too much structure and too much process can suffocate that flame. You can squander the initial creativity that comes early on in a project if you don't allow for the development of awkward ideas. But without the resources and wood to feed into the flame, it will be lost to the winds of change."

Starlink: Battle for Atlas is coming to PS4, Xbox One, and Switch in fall 2018. For more, check out our previous Starlink coverage.