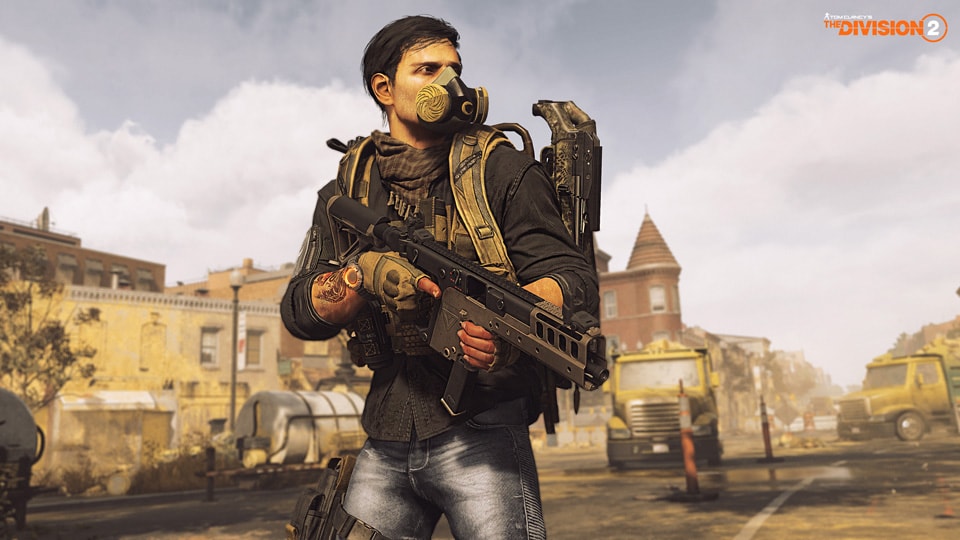 Operation Dark Hours, The Division 2's first eight-player raid, is now live (check out our guide to make sure you're raid ready) – and Snowdrop, the engine that powers post-Collapse Washington, DC, is picking up speed as more Ubisoft studios use it to build their games. According to Ola Holmdahl, production manager for the Snowdrop team at Ubisoft Massive, Snowdrop provides tools that enable any member of a development team to quickly build and implement an idea to see how it works, pitch it to other team members, and take ownership of its development. This leads to faster turnaround times, while also enabling more creativity from individual developers.

"We went for a strongly data-driven approach, to reduce the amount of programming competency needed to build a feature or to try out an idea," says Ola Holmdahl, production manager for the Snowdrop team at Massive. "It's such a roadblock when you have an idea and need to wait for a coder or two to have bandwidth to try it out."

Work on what would eventually become Snowdrop began when Ubisoft acquired Massive Entertainment in 2008. Since its debut as the backbone of The Division, games built in Snowdrop have included South Park: The Fractured But Whole, Mario + Rabbids Kingdom Battle, and Starlink: Battle for Atlas – and the list is growing. To find out more, we spoke with Holmdahl about what Snowdrop can do, why it's useful to developers, and where it's headed in the future.

Let's start with a very basic question, because there seem to be lots of misconceptions about this: what is a game engine?

Ola Holmdahl: Basically, a game engine is software that will talk to a computer of some description – a game console, a PC – and help it understand what to do; which graphics to draw up, which physics to simulate, how to save file formats, how to remember what you did last time you played, all these things. Essentially, it's a group of core functions that talk to the computer at the lowest level, and then just libraries of functions. Everything you'd imagine a game should be able to do is a collection of libraries of functions, which end up under the umbrella term "game engine."

What, in your mind, are the biggest misconceptions about what an engine does?

OH: To some extent, I think the biggest misconception is that an engine of a certain kind makes the game look pretty. Because that happens if you have a good team of artists. I think very few people are at the level where what engine you have is the key deciding factor. It's much more down to the skill and the commitment of the artists.

What are some of the most common problems developers run into with engines? And how does Snowdrop specifically set out to address those?

OH: A typical challenge for developers is long turnaround times. You've made a change; how long do you have to wait for the whole thing to compile before you can start it up and show it? On certain engines, that can take hours. So with Snowdrop, we work very, very actively with our pipelining and our data management, and we usually can produce a new build in minutes. So if you made a change, and you want to see what happened, you can do it quite quickly, and you can show others quite quickly.

Is efficiency the ultimate goal with every engine?

OH: It depends. Some engines might go for, say, raw output or raw power, and might sacrifice efficiency on that altar. But in one way or another relative to your goal, efficiency is always the name of the game.

Snowdrop has grown considerably in the past few years, as more Ubisoft studios have adopted it. What's been the key thing for convincing those studios that Snowdrop is the right tool for them to use?

OH: Teams within Ubisoft are largely free to choose what engine to use when they build their next game. So usually, they have an idea of what sort of game they want to build, and they look around at the different available engine options, and make their decisions based on that. For some teams, another engine might be better for various reasons; for others, Snowdrop is the superior choice.

We're happy because that number is growing without us having to do much [internal] marketing, in the sense that we have evaluation branches available, letting people pick it up and try it out and make their own choices.

Snowdrop seems to be able to scale easily from something like the Nintendo Switch to something like a PC, or the Xbox One X. Is it a challenge to create something that can talk fluently to so many pieces of hardware?

OH: It is, yes. It's quite a technical challenge, because some platforms are more alike; a PC is fundamentally not very different from, let's say, the platforms from Sony and Microsoft, whereas if you go to mobile devices or the Switch – which has a lot of mobile requirements, so it's closer to a mobile device – you have to think of it differently. That's a challenge. It's surmountable, of course, but there's a span, and the distance is greater in certain platforms than it is in others.

How do breakthroughs happen with game engines? Is it just a matter of teams working continuously on it until they discover some new capability?

OH: Breakthroughs happen through hard work; typically perspiration, rather than inspiration. Massive has a history of building its own game engines since 1997, and it has learned a lot about what is actually important to [developers]. How should the team use this engine? What have been the greatest bottlenecks of pain that we've seen, and what would happen if we turn things around and make those into strengths, rather than weaknesses?

So breakthroughs can happen through looking at all your experience, and drawing the right conclusions. It could happen from, of course, a very skilled team member having a good idea, and then the perseverance to execute it to the point where he can show others, and they can become believers. But it's pretty rare for someone to sit in isolation and have a eureka moment, and then, suddenly, everything is better.

Ubisoft's new campaign for recruiting new employees is Create the Unknown. For engines, what does it mean to you when you hear "Create the Unknown?" What is the "unknown" for engines? Is it finding the next big thing that will help make things more efficient? Is it having a breakthrough for something that wasn't even imagined possible before?

OH: I think it's the latter. I think it's having a breakthrough that no one even thought of before. And that can be chance; you're experimenting, you're making mistakes, and suddenly, wait a minute, perhaps I can plug this mistake into this other mistake. And two wrongs make a right, and hey, presto! You have something.

Let's put it this way: the context of innovation is always hard to nail down. Where do the ideas come from, exactly? But the context of improvement – once you see a good idea, what do you do with it? – that can be improved. You can learn to recognize the good ideas. You can learn to make the most of them quickly, and that's where we put a lot of work. But good ideas, I think there's still magic in that.

What do you see as the next big innovation in engines?

OH: I think that's a very tough question, in a sense. I have guesses and ideas, but let's put it this way: A wise entrepreneur once told me that if you have a really, really good idea, you need to execute it immediately, because they are 10 other teams with that same idea out there. But if you have a unique, world-beating, once-in-a-lifetime idea? You'd better be very quick, because then it's a hundred teams.

As Snowdrop and Massive have grown, how has the culture of the studio changed?

OH: I think it's great. When you go past 120 or 130 employees, that's always a big culture shift, because it's just more people than you can readily keep track of. It turns into a different kind of company and organization.

I think one of the key strengths of Massive Entertainment – and, I think, Ubisoft in general, but I know Massive – is that it's very good at welcoming new people. It hasn't crystallized around a hardcore group of old-timers and founders. Anyone who comes in who is passionate, willing to give it their best, and provide energy and ideas and learn skills – or have skills, if it's an experienced person – can gel into the team and get a leadership role. And I think that's how Massive has been able to scale. I think that's an ability that has improved over the last five or six years alongside the growth, and without it, I don't think this growth would have been as successful.

For more information on Ubisoft careers, click here. For more on games built with the Snowdrop engine, including The Division 2, check out our previous coverage.