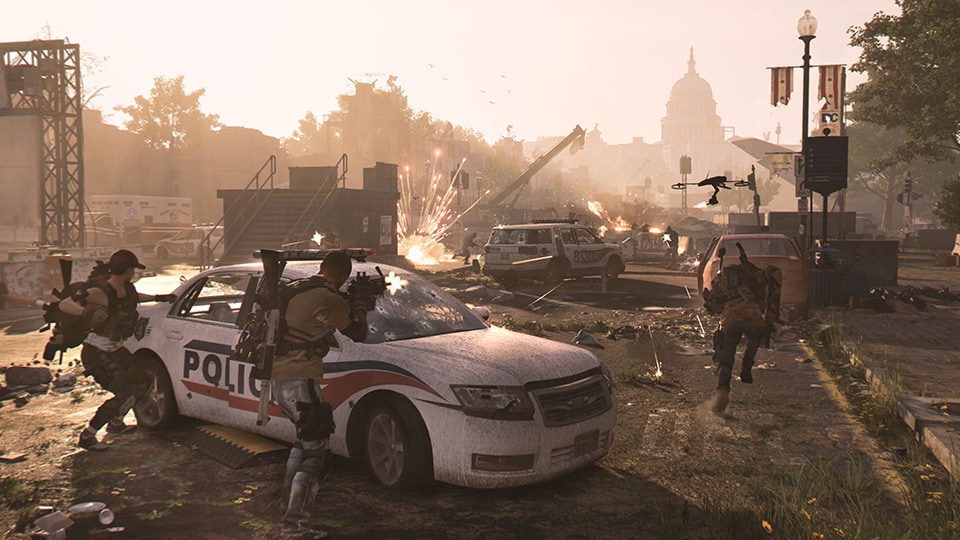 The Division 2's world and story are expanding beyond the game in 2019, with comics and a lore book from Dark Horse, as well as a novel written by Alex Irvine, author of Tom Clancy's The Division: New York Collapse. These upcoming works got a turn in the spotlight at San Diego Comic-Con during the "Infectiously Expanding the Universe of Tom Clancy's The Division 2" panel, which included two of The Division 2's developers, Creative Director Julian Gerighty and Lead Narrative Designer John Björling. Before the panel, we had a chance to speak with Gerighty and Björling about Ubisoft Massive's involvement in the books' creation and how "cross media" can expand a fictional world.

When did your team begin working with Dark Horse and Alex Irvine on the comics and novel? How involved were you in accepting the pitches?

John Björling: Even though the narrative team is very busy with the game, the books align a lot with what we're already thinking about, so it has been really natural for us to address those things, or talk about ideas, or adapt pitches. We've tried to participate as actively as we can. When you're starting a creative relationship like that, you also want to feel each other out, and get an idea of what are their strengths, what are their weaknesses, and what do we have that fits and really makes things click?

What was really good with Alex Irvine was that we'd worked with him before on Tom Clancy's The Division: New York Collapse. He was familiar with the project, and we were familiar with him, so that felt very natural. So it's people we're really comfortable with, which makes things a lot easier; people who are familiar with the game, the brand, and everything. Once the business relationship was established, the creative relationship was really easy. But trying to develop a novel pitch and a comic pitch while you're also trying to iterate on a game story is, of course, difficult. But I think we have the best possible situation to make things happen.

How mindful do you have to be with cross-media projects when creating a game? For example, the original Division had a callback to a character from the New York Collapse book.

Julian Gerighty: What was interesting when we first started briefing the people who were going to work on these properties is that they came with baggage from the first game. Irvine was the writer for the New York Collapse book, and for the April Kelleher character. So these are people with roots in the property from day one, if you will. So it's very natural for them, when we talk to them, to say, "OK, we're going to include these tidbits of what happened in New York or during the fall, and bring them, maybe, into the world of The Division 2.

What about these projects excites or interests you the most?

JG: For me, it's always great to see properties that we've worked on super-hard – in terms of building the world, building the characters, building the stories – in other places, in places where my parents could enjoy them. Having the project extend its tentacles into entertainment that can be enjoyed by more people is always super, super exciting. And every different type of entertainment, from comic books, to books, to movies, TV series, videogames, they tell stories in massively different ways. If we can lean into the qualities of each type of format, then it's a win for everyone.

What do you want people to take away from the comic books and the novel? What do you see them adding to the world of The Division 2?

JG: Again, I think every medium has its strengths, so with an open-world, nonlinear, co-op focused game, maybe we can't go into as much detail about how people are living through the chaos, or how people are trying to survive. But in a book, or in a comic book, we can detail that a little more. So it helps us flesh out the whole universe completely.

So much of The Division is encountering other people's stories and creating your own through the experiences that you have. Is it weird to flip that around and have readers follow a journey that isn't their own?

JB: I think that's like comparing the player avatar story versus the supporting cast or the main cast's stories. I think that's a natural thing. The actors in the game story are the characters that we hope to expand on in the cross-media stuff. There's not like a chosen one or a hero or anything like that; it's more a world, really.

Even in the environment, there is a story to why things are the way they are. And when we're building missions and locations and so on, we need to consider all the different phases a location has gone through, and how our main story is all about direct action, solving problems and stuff, there is this constant presence of this underlying story that is not present, it's not happening right in front of you. You're actually more of a detective at a crime scene, really, and you try to piece things together and you build a narrative out of a lot of different puzzle pieces. And since it's completely open, you can pick them up in any order, and hopefully by the time you've collected a certain number of puzzle pieces, you start to get a bigger picture.

Of course, with the cross media, they have so many other things that they can do to uncover that stuff in ways that we couldn't do in a videogame. No one is going to want to hear the inner monologues of a Division Agent in the game, but that's what a novel can do. It can add a lot of complexity and depth and width to The Division.

There's powerful symbolism in moving the setting from NY to DC, but why advance the seasons from winter to summer? How does that seasonal change affect the tone of the storytelling?

JG: I think that New York, with all of its qualities, is a city that doesn't propose a huge amount of variety in terms of playing space. And winter is fairly monotone, in terms of color as well. What we wanted to do was really lean into something that was much more colorful and warm, and symbolizes rebirth as well. And that's why we chose summer in DC, to say, "This is July 4. This is going to be the new state of American independence."

The Division 2 will launch on March 15, 2019, for PS4, Xbox One, and PC. The World of Tom Clancy's The Division lore book will be published by Dark Horse on March 19, while the novel – which continues the story of April Kelleher begun in New York Collapse – will be released in March 2019. The comic book series from Dark Horse will also be available in 2019. For more on The Division 2, check out our previous coverage.